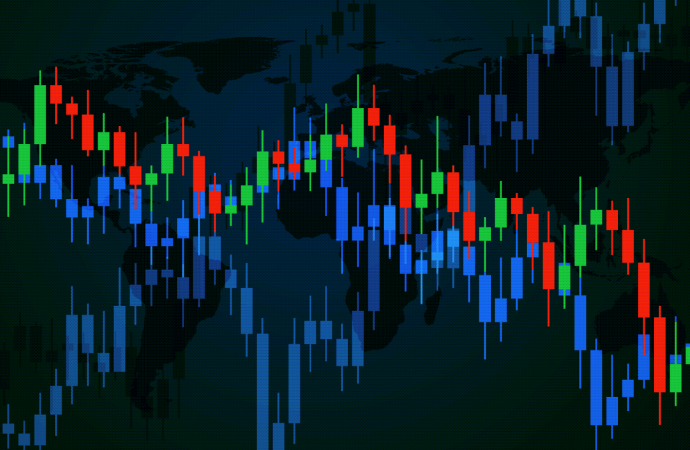 Quasimodo support drawn from mid-June at $1.1213 (positioned beneath the weekly timeframe’s Fibonacci structure) made an entrance on 24th November (2021) and remains committed, despite a passionless attempt from bulls. A run higher casts light on trendline resistance, extended from the high $1.2254. Establishing a decisive close beneath $1.1213, however, exposes support on the daily timeframe at $1.0991 (not visible on the screen).

The relative strength index (RSI) whipsawed above the 50.00 centreline in recent movement. Note that this level has delivered resistance since mid-October (2021). Overthrowing the latter helps validate interest to the upside from current price support (shown through average gains exceeding average losses), yet defending 50.00 connotes a bearish picture, in line with the immediate downtrend (since May 2021).

Europe’s shared currency was on the ropes against the US dollar Monday, influenced on the back of a USD bid (boosted by higher US Treasury yields) and technical selling.

Downstream, the technical radar points to support at $1.1235, suggesting the unit may revisit breached supports and form resistance to tackle lower levels.

Breaking $1.32 bids and tripping sell-stop flow, along with price establishing support from the aforementioned prime support and Fibonacci ratio, gives rise to a possible stop-run scenario. This tends to bring about heavy buying (bids welcoming selling derived from sell-stops). A close back above $1.32 will help validate this concept.

Short term, H1 bulls are likely to react to a close back above $1.32. The caveat, of course, is H4 resistance stationed at $1.1307 could hinder bullish efforts. With this being the case, technical traders might wait and see if price holds $1.32 as support before committing.

North of the aforesaid resistances, two trendline resistances are seen (taken from highs $0.8007 and $0.7891). Continuation selling, however, shifts attention to support at $0.7021.

Momentum studies show the relative strength index (RSI) has, at the time of writing, failed to find a reception above the 50.00 centreline. Holding south of the latter emphasises a bearish setting (average losses exceeding average gains: negative momentum).

Following a phase of slowing momentum—demonstrated by way of an ascending channel, drawn from $0.7196 and $0.7252—Aussie shorts (alongside other G10 FX currencies) governed control on Monday as the US dollar index (DXY) commanded attention from daily support at 95.86.

The breach of support at $0.7213 deserves attention (now marked as resistance), potentially setting the technical stage for further selling to as far south as support at $0.7097. Demand also resides around $0.7121-0.7166.

In conjunction with the H4 timeframe’s support breach at $0.7213, shorter-term flow on the H1 timeframe elbowed under $0.72 and, in recent hours, retested the lower side of the level as resistance.

The relative strength index (RSI) is currently set within oversold surroundings, a touch ahead of indicator support from 16.44.

Based on H4 and H1 analysis, sellers appear to have the upper hand.

RSI (relative strength index) analysis shows the value rebounded from support between 40.00 and 50.00 (indicator support often forms around the 50.00 area amid prolonged uptrends and operates as a ‘temporary’ oversold base) and is within striking distance of overbought territory.

Since 17th December, USD/JPY has remained firmly to the upside with sellers demonstrating little interest. Following the break of resistance at ¥114.50 (now marked as support), Monday touched gloves with resistance at ¥115.38 and a 1.272% Fibonacci projection from $115.32.

The relative strength index (RSI) continues to respect support between 40.00 and 50.00. Experienced technicians will view this area as a ‘temporary’ oversold base, due to the prolonged up move in December. Monday’s rebound from oversold support, as you can see, places the indicator within reach of overbought levels.