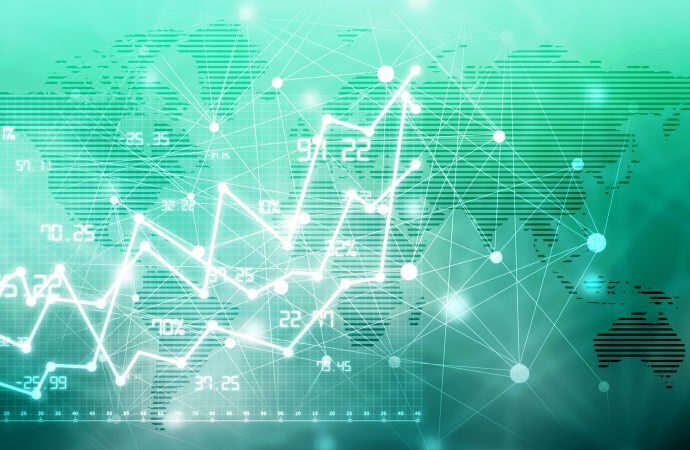 Joining the lower edge of weekly resistance at $1.1473-1.1583 is a 7-month trendline resistance on the daily timeframe, extended from the high $1.2254. Last week challenged the aforesaid descending line, established by way of a bearish engulfing candle (a reversal pattern in which focus is directed to the real candle body rather than upper and lower shadows). Should bearish follow-through emerge, Quasimodo support offers an obvious target at $1.1213.

Upside momentum, according to the relative strength index (RSI), remains fatigued; the indicator is threatening to navigate south of the 50.00 centreline, movement communicating negative momentum (average losses outweighing average gains) and, thus, in agreement with the near-term bearish landscape.

Having noted soft US Treasury yields, aided (technically) by a Fibonacci resistance between 1.939% and 1.867% on the daily timeframe, EUR/USD responded well to resistance at $1.1354-1.1379—a prior decision point positioned a handful of pips beneath resistance at $1.1382.

The relative strength index (RSI), following a test of the lower side of 50.00, is bound for oversold territory (keep a tab on indicator support at 18.00), currently circling 35.00ish.

The weekly timeframe coming from resistance at $1.1473-1.1583, the daily timeframe holding south of trendline resistance, and the H4 trading from resistance at $1.1354-1.1379 which holds H1 supply within at $1.1363-1.1375 informs traders we might take on $1.13 on the H1. Note that should the latter enter the frame, a whipsaw beneath the psychological boundary could play out, tagging the upper edge of weekly support at $1.1281 and rebounding higher.

AUD/USD bulls regaining consciousness on Thursday, extending Wednesday’s push, throws resistance between $0.7413 (the 200-day simple moving average) and $0.7315 (a 100% Fibonacci projection) back into the mix. Considering the subdued bullish showing since rebounding from support at $0.7021, a spirited rejection could develop from the noted resistance, if challenged.

The relative strength index (RSI) is establishing support off the 50.00 centreline, action that may lift the indicator to overbought surroundings.

Touching gloves with resistance at $0.7273, the currency pair made its way lower in early US trading on Thursday despite a rebound in risk appetite and healthy Aussie employment figures earlier in Asia.

Supply-turned demand from $0.7254-0.7238 is now in play, with a break reaffirming bearish commitment towards the $0.72ish neighbourhood. In conjunction with this, a 50.00 centreline breach on the relative strength index (RSI) to the downside would help confirm seller intent, currently exploring 55.00ish.

Long term, a jump to daily resistance between $0.7413 and $0.7315 could be on the cards before higher timeframe shorts put in an appearance.

The technical framework to be mindful of on this chart remains unchanged:

Quasimodo support-turned resistance at ¥114.71 elbowed into the frame Tuesday and, held a bearish vibe on Wednesday and Thursday. Pursuing lower prices highlights a familiar decision point at ¥113.54-113.78, set a few pips above Quasimodo support at ¥113.22.

¥114 emerged and put forward modest intraday supportive structure in US hours on Thursday. Albeit a move that may rejuvenate buyer interest, the overall technical landscape is tipped for further underperformance.

The ¥114 figure, therefore, also advertises itself as a weak level, exhibiting little confluence to write about. Beyond the round number, Quasimodo support sits at ¥113.64, closely shadowed by two support levels at ¥113.34 and ¥113.56. Also worth noting is the relative strength index (RSI) exploring waters under the 50.00 centreline, yet to test oversold space.

In similar fashion to Thursday’s technical briefing, chart studies indicate a ¥114 breach on the H1 timeframe. Short-term players are likely to take aim at H1 Quasimodo support at ¥113.64, and perhaps support at ¥113.34 and ¥113.56.

Support coming in from $1.3602 is ‘up against the ropes’, unable to entice a healthy bid since dropping from the 200-day simple moving average at $1.3730. Below $1.3602 re-opens the door for a return to neighbouring trendline resistance-turned support, taken from the high $1.4250.

Momentum studies taken from the relative strength index (RSI) continue to pursue 60.00 after dipping from overbought territory. Rupturing 60.00 casts light on the 50.00 centreline.

Further selling, of course, entails going up against willing daily bids from support at $1.3602, albeit appearing a somewhat fragile base at the moment.

Technical studies out of the H1 chart reveals the unit testing $1.36 after peaking at $1.3662 in early US on Thursday. Quasimodo support calls for attention beneath the psychological number at $1.3580, with subsequent bearish pressure opening up support from $1.3533 and $1.35.

As you would expect, the relative strength index (RSI) voyaged under the 50.00 centreline and is now within reach of oversold waters.

As for downside targets, the technical radar is directed to H1 support at $1.3533 and $1.35 (aligns closely with the daily timeframe’s trendline resistance-turned support, taken from the high $1.4250).