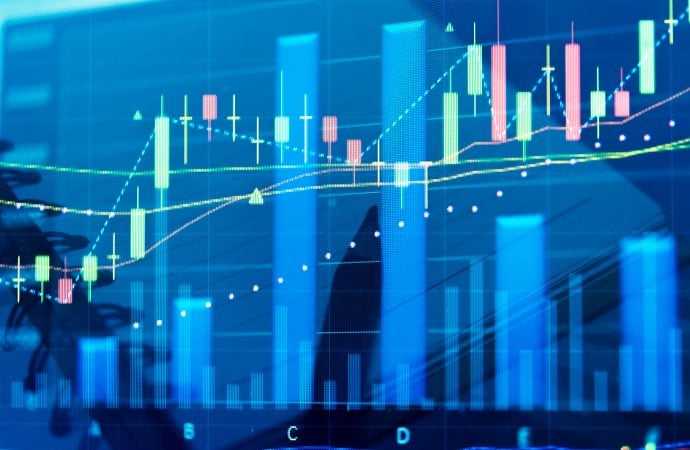 While this reasons additional upside towards ascending resistance (prior support – 1.1641) may eventually be on the horizon, before we press higher, an 1.1857/1.1352 retest is also on the cards in view of February’s correction.

After failing to find acceptance north of the 50.00 centreline, RSI movement, deprived of support, made its way sub 40.00 yesterday.

After withstanding three downside attempts, demand at 1.2040/1.2065 caved under the pressure of selling Tuesday, fuelled by the US dollar index (DXY) upholding a bullish tone above 91.00.

Those short the textbook three-drive bearish pattern at 1.2156 (the 127.2% Fib projection) have had a good start to the week, with a near 150-pip decline.

Mid-way through London on Tuesday, sellers stormed 1.2050 support. After a swift 1.2050 retest, further weakness threw light on the 1.20 level—a key base just about every market technician will be watching today.

Based on the RSI indicator, we are seeing minor bullish divergence after failing to find grip above the 50.00 centreline.

A dip into 1.20 bids is on the table, according to chart structure.

What’s interesting from a technical perspective is while this entails whipsawing through trendline support on the daily timeframe, the 1.20 level shares space with the upper edge of daily demand at 1.1923/1.2001.

As a result, 1.20 has some reasonably strong backing and could put up a fight if tested.

This, together with February’s 0.5 percent depreciation, shines light on a possible correction in the first quarter of 2021. Though should buyers regain consciousness, a continuation higher to 0.8303/0.8082—a supply zone aligning closely with trendline resistance (prior support – 0.4776)—could play out.

Latest developments nudged trendline support (0.5506) in the fight. Buyers, as you can see, have shown some life, though traders are still urged to pencil in demand at 0.7453/0.7384 (prior supply) should sellers make a show.

As evidenced from the RSI indicator, the value is seen dipping a toe in waters beneath the 50.00 centreline, following a trendline support breach last week.

For those who read Tuesday’s technical writing you may recall the following (italics):

The break of demand at 0.7600/0.7625 last Thursday likely cornered many buyers in this region. This, alongside the Fib cluster at 0.7696 serving up resistance, suggests price is perhaps bound for territory south of demand. Interestingly, below demand we have the daily trendline support close by around the 0.7583 neighbourhood.

As you can see from the chart, price has snapped through demand at 0.7600/0.7625, with daily price reacting from trendline support—a fakeout play here?

Similar to the H4 chart, H1 whipsawed through 0.76 bids—likely causing pain on both sides of the market—and tested daily trendline support. Focus is now on price reclaiming 0.76+ status, a move which could provide upside impetus today.

In terms of the RSI indicator, we are seeing the value head for the underside of the 50.00 centreline, with resistance targeted at 60.18.

Buyers holding the daily trendline support, along with H4 tripping stops south of demand at 0.7600/0.7625 as well as H1 also tripping stops below 0.76, could spark a bullish scenario above 0.76 today, assuming a H1 close above the level.

Although December pursued terrain south of 104.62, January chalked up a comeback and retested the level.

Against the backdrop of the monthly chart demonstrating a 104.62 retest (a potential bearish signal), the pair recently chalked up a fifth successive bullish close on the daily chart, albeit with yesterday wrapping up considerably off best levels.

In addition, RSI resistance at 57.00—a level hindering upside since July 2020—also gave in last week, with the value now on the doorstep of overbought space.

In recent writing, the research team shined the spotlight on a harmonic Gartley pattern’s potential reversal zone (PRZ) between 105.17 and 105.00. Support is found at 104.16, with interest also likely directed at trendline support (102.59).

Price recently tested the range of the PRZ and sellers appear to be holding lower, for now.

105.14 resistance made a show on Tuesday—a double-top pattern formed mid-November (2020)—with enough force to position H1 back under 105.

As noted in Monday’s report, monthly price circling the lower side of the descending triangle at 104.62 may pressure daily breakout buyers above trendline resistance.

Aside from Tuesday churning out an indecision doji candle (given previous price action this is unlikely to be interpreted as a reversal signal), the technical framework has remained unchanged since January 21.

Buyers and sellers continue to square off around the lower side of resistance at 1.3755. Breaching the latter brings light to supply at 1.3996/1.3918.

The RSI indicator has revealed a rangebound environment since November, limited by support around 47.00 and resistance at the 66.00 region (the value stands at 54.20). It is common to see higher oversold support areas form in an uptrend.

Unchanged from previous analysis due to lacklustre movement –

Rebounding from 1.3611, accompanied by an RSI oversold signal yesterday, the underside of the breached ascending line (not a traditional trendline) is being retested, with sellers displaying interest.

With the above taken on board, sellers may not find much grip from the underside of the H1 ascending line and instead look to 1.37 confluence (61.8% Fib resistance and nearby 100-period simple moving average). Though in light of the higher timeframes showing room to pursue higher territory, a H1 close north of 1.37 may form and could be interpreted as a bullish cue to reach tops around 1.3758 (the upper edge of the previous H1 ascending triangle).