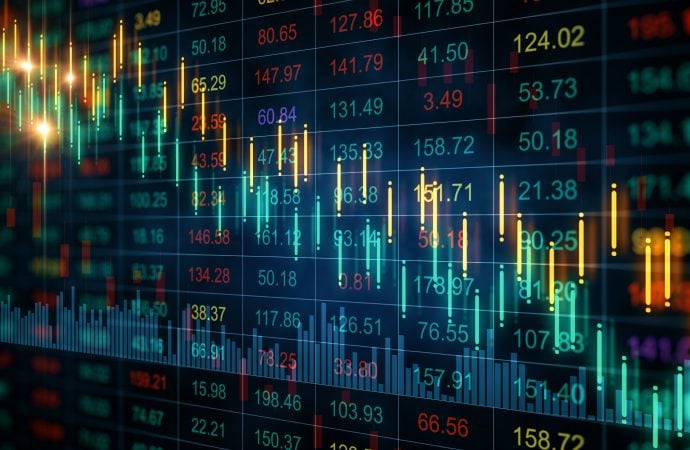 Despite a bullish showing so far this week, territory below exhibits scope to fall as far south as Quasimodo support coming in at $1.0778.

Momentum studies on this timeframe show the relative strength index (RSI) spun higher ahead of oversold waters and is poised to reconnect with the 50.00 centreline. Defending the latter would help validate the downtrend seen on the daily chart since late May 2021.

Concerning the relative strength index (RSI), the value fell from overbought levels and is within earshot of the 50.00 centreline. Journeying under the latter is likely to be viewed as weakness and signals a fragile $1.1234-1.1246 zone.

Since mid-Feb tops at $0.8007 (2021), sellers have taken the wheel. This followed a bullish period since pandemic lows of $0.5506 (March 2020). It is important to note the monthly timeframe has been entrenched within a large-scale downtrend from mid-2011.

Support at $0.7021—a level boasting eye-watering historical significance since 1994—commanded attention on Monday, adding weight to the recent recovery within weekly prime support at $0.6968-0.7242. Quasimodo support at $0.6896 resides south of current support should sellers retake control.

January tops around $0.7283 are visible if buyers continue exploring higher levels, closely shadowed by trendline resistance, taken from the high $0.7891.

RSI studies (relative strength index) show the indicator bottomed north of oversold space and is exploring the possibility of connecting with the 50.00 centreline. In terms of trend, the daily timeframe remains underwater, shown by way of trendline resistances, taken from highs $0.8807/$0.7891.

The $0.7042 support served this timeframe well in recent trading, allowing an early bid to overthrow supply from $0.7088-0.7073. Subsequent movement retested the aforementioned area, establishing enough of a floor to clear $0.71 in US trading.

Upriver, Quasimodo support-turned resistance warrants attention at $0.7129, followed by Quasimodo resistance at $0.7170 which happens to reside within the lower boundary of the H4 resistance zone underlined above at $0.7169-0.7187.

Channel support, taken from the low ¥102.59, inhabits neighbouring territory, emphasised by nearby support at ¥112.16. The aforementioned areas remain favoured locations on the weekly scale, in line with the underlying trend (advancing since the beginning of 2021).

Further buying, movement overtaking ¥116.09, may eventually underpin a move to channel resistance, extended from the high ¥110.97.

The technical landscape on the daily chart reveals price engulfed the neckline of a double-top formation (¥113.48) at ¥115.06. Despite a recent three-day slide (0.9 percent), Quasimodo resistance at ¥116.33 remains a reasonable upside target.

The trend on this timeframe, like the weekly timeframe, faces northbound and supports a move higher. This is reinforced by the relative strength index (RSI) recoiling from support between 40.00 and 50.00 (a ‘temporary’ oversold range since 10th May—common view in trending markets).

The ¥114.48-114.78 decision point welcomed price action on Tuesday. A recovery from here supports the higher timeframe view and could take aim at last Friday’s high ¥115.69, whereas a breach indicates weak interest in the daily timeframe’s double-bottom pattern, and a drop towards trendline resistance-turned support (taken from the high ¥116.35) could be in order, together with a decision point at ¥113.54-113.78.

In addition to the noted structure, the relative strength index (RSI) rebounded from oversold levels on Tuesday and is currently circling above 40.00 and threatening a test of the 50.00 centreline.

Reaching a top at $1.3749 in early January watched GBP/USD bears assume control. While this re-opens the door to the double-top pattern’s ($1.4241) profit objective around $1.3093 (red boxes), traders will note the currency pair is up by 1.0 percent this week, reclaiming the prior week’s downside.

Dollar softness, combined with the Bank of England (BoE) expected to hike rates on Thursday, GBP/USD bulls remained in the driving seat on Tuesday, extending recovery gains ahead of support at $1.3355. Additional interest to the upside draws resistance into the fold at $1.3602, followed by the 200-day simple moving average (currently circling $1.3713).

A break of noted support exposes Quasimodo support at $1.3119, a base situated just under December bottoms around $1.3172.

Trend on this timeframe remains biased to the downside; the relative strength index (RSI) holding a test of the 50.00 centreline could reaffirm the downside bias.

Last Wednesday’s tops at $1.3523 are currently being challenged, arranged north of $1.35. This followed an earlier break of trendline resistance, drawn from the high $1.3743. Upstream throws interest on resistance at $1.3549, with $1.36 seen higher.

The psychological figure $1.36 (H1) and daily resistance from $1.3602 serves as reasonably strong confluence to be mindful of.

Nevertheless, knowing the H1 RSI is recording overbought conditions, more immediate levels to be aware of on the H1 scale are last Wednesday’s tops at $1.3523 and resistance at $1.3549.