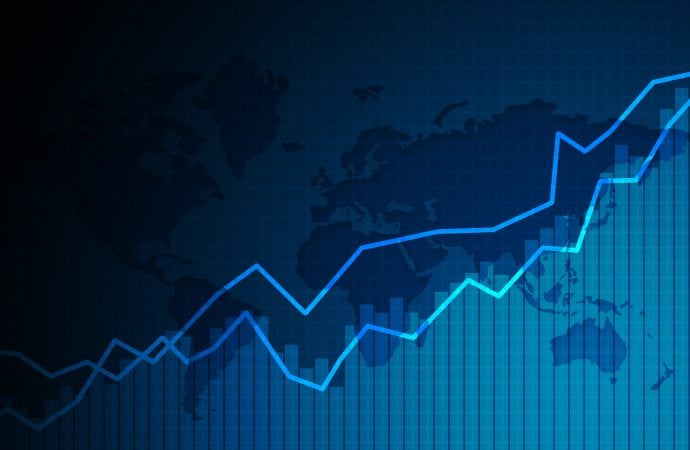 This reasons additional upside towards ascending resistance (prior support – 1.1641) may eventually be on the horizon. Though before we press higher, an 1.1857/1.1352 retest is also on the cards.

Monday, however, witnessed sellers step forward in force as the US dollar index chalked up bold moves to the upside.

Leaving resistance at 60.30 unchallenged, RSI fans will also note the value is navigating waters south of the 50.00 centreline.

Demand at 1.2040/1.2065 has commanded a presence on the H4 chart since early December, withstanding three downside attempts. Equally impressive has been resistance at 1.2179—capping buyers since the middle of January.

For those who read Monday’s report you may recall the following (italics):

This shines the light on a possible correction in the first quarter of 2021, though should buyers regain consciousness we could see continuation higher to 0.8303/0.8082—a supply zone aligning closely with trendline resistance (prior support – 0.4776).

Out of the RSI indicator, the value is seen testing waters beneath the 50.00 centreline, following a trendline support breach last week.

Overall, there has been little change on the H4 timeframe’s front.

The break of demand at 0.7600/0.7625 last Thursday likely cornered many buyers in this region. This, alongside the Fib cluster at 0.7696 serving up resistance, suggests price is perhaps bound for territory south of demand.

Interestingly, below demand we have the daily trendline support close by around the 0.7583 neighbourhood.

To the upside, resistance is seen in the shape of a 100-period simple moving average at 0.7664, followed by the 0.77 figure. 0.77 demonstrated effective resistance over the course of last week, aided by RSI resistance at 60.18 and the H4 Fib cluster underlined at 0.7696.

Monthly could embrace higher levels in the coming weeks, yet before daily buyers join the fight a test of trendline support may unfold.

Fragile H4 demand at 0.7600/0.7625 could suffer another blow today, removing any remaining buyers and causing a bear trap as daily buyers might defend nearby trendline support (red arrows). A similar picture may arise on the H1 this week: a whipsaw through 0.76 bids into daily trendline support (blue arrows).

Overall, the picture appears to still favour buyers south of 0.76.

Although December pursued terrain south of 104.62, January chalked up a comeback and retested the level. 104.62 ceding ground throws light on support from 101.70, with a break here uncovering trendline support (76.15) and the descending triangle’s take-profit objective at 91.04 (red).

Against the backdrop of the monthly chart demonstrating a 104.62 retest (a potential bearish signal), the daily timeframe shows upside gained speed on Friday and extended recovery gains on Monday. Recent movement also stripped trendline resistance (111.71) and fuels a possible continuation to the 200-day simple moving average at 105.61, and supply at 106.33/105.78.

In addition, RSI resistance at 57.00—a level hindering upside since July 2020—also gave in last week, with the value now on the doorstep of overbought space.

As you can see from Monday’s action, we have tested the harmonic Gartley pattern’s PRZ at 105.17/105.00 and sellers have held ground thus far.

The 105 figure, a psychological level located within the harmonic Gartley pattern’s PRZ at 105.17/105.00, also made an entrance on Monday and responded by way of a bearish outside reversal candle.

RSI fans will also note trendline support is having its limits tested.

As noted in Monday’s report, monthly price circling the lower side of a descending triangle at 104.62 may pressure daily breakout buyers above trendline resistance.

Given monthly resistance at 104.62 in play, the H4 timeframe’s Gartley pattern’s PRZ between 105.17 and 105.00, and the 105 psychological resistance on the H1, offers substantial confluence (resistance) to work with today.

While the monthly timeframe favours further upside, since January 21, buyers and sellers have been squaring off around the lower side of resistance at 1.3755 on the daily timeframe.

Between the 1.3611 low and the high 1.3758, pattern traders will note an ascending triangle forming. Within the pattern’s range, the 1.37 figure is seen alongside the 100-period simple moving average at 1.3704. Note that H1 is currently seen rebounding from the lower side of the ascending triangle’s limit.

In terms of the RSI indicator, mild bullish divergence formed ahead of the oversold region. The value currently stands at 42.00.

The monthly timeframe holding things north of trendline resistance carries a bullish atmosphere. This, of course, places a question mark on daily resistance at 1.3755, and also emphasises possible strength behind H4 demand at 1.3618/1.3637.

With this, buyers extending off the lower side of the H1 ascending triangle could see the candles overthrow 1.37 and the 100-period simple moving average today.