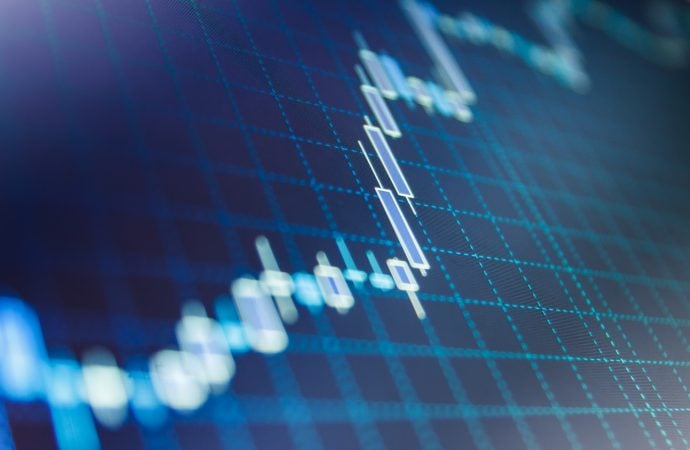 February, as you can see, remains considerably off worst levels and recently entered positive territory, trading 0.4 percent higher. Closing the month out at current prices, in the form of a hammer candle (bullish signal at troughs), is likely to excite candlestick enthusiasts.

EUR/USD stabbed to peaks at 1.2243 on Thursday, yet on the back of the DXY finishing off worst levels as US Treasury yields spiked, the currency pair wrapped up in the shape of a shooting star pattern off highs.

RSI action remains north of the 50.00 centreline, on the doorstep of resistance at 60.30.

Shaped by way of a shooting star and a gravestone doji, candle action peaked just south of supply priced in at 1.2282/1.2245 on Thursday and retreated back to support at 1.2179. Having seen this level serve well as resistance since mid-January, the odds of buyers attempting to make an entrance here is high.

Though should 1.2179 fail to offer a floor, Quasimodo support at 1.2135 is likely to call for attention.

The one-sided decline amid US hours on Thursday delivered a forceful 1.22 breach to the downside and subsequent test of support at 1.2166 (a previous Quasimodo resistance level).

Interestingly, the RSI turned from resistance at 78.97, a base capping upside since the middle of January. Note also that the value dropped through the 50.00 centreline.

The area formed between H1 trendline support (1.2023), the 100-period simple moving average and H1 support at 1.2166 (green zone) is an area buyers possibly have on the watchlist today. Not only is the zone bolstered by a nearby H4 support at 1.2179, monthly price suggests scope to approach higher levels. A H1 close above 1.22 is likely to add bullish conviction.

Thursday, as you can see, carved out a bearish outside reversal pattern from supply at 0.8045/0.7985 (located south of monthly supply at 0.8303/0.8082), movement nearly engulfing three previous candles.

Thursday’s downside moves eventually overwhelmed buying interest off 0.79, allowing for a test of the 50.0% retracement level at 0.7865, plotted ahead of 0.7850 support. Lower, we see a reasonably clear run back to 0.78.

Following January’s bullish engulfing candle, buyers have attempted to find some grip in February, up by 1.5 percent.

Supply at 106.33/105.78 came under fire in recent movement, as USD/JPY registered a third successive daily gain, despite declines witnessed in US equities (action that usually reinforces a JPY bid).

With buyers gaining confidence north of the 200-day simple moving average at 105.48, additional supply is worth taking into consideration at 107.58/106.85.

Additionally, RSI action remains healthy off 57.00 support, on the verge of shaking hands with overbought terrain.

Unable to hold back buyers, resistance at 106.11 stepped aside on Thursday and was swiftly retested as support in recent hours.

Chart studies suggest we’re heading higher in the short term, backed by the monthly timeframe’s technical picture and a somewhat fragile supply on the daily timeframe at 106.33/105.78. So, with that being said, a H1 bullish breakout theme could emerge above 106.27, with 106.44 (H4) and 106.50 resistance (H1) targeted.

Sterling dropped sharply against the US dollar on Thursday, snapping a five-day bullish phase.

Largely driven by a surge in US Treasury yields backing a USD spike higher, GBP/USD retreated 1 percent and now flirts with support priced in at 1.4011.

The RSI rotated lower from 77.40 and exited overbought levels.

Trendline support, extended from the low 1.3566, is now within a stone’s throw from making an entrance, intersecting with a 38.2% Fib level at 1.3982. Traders considering the trendline as a base for potential buying are urged to consider 1.3942/1.3900 demand (previous supply), as price could whipsaw through trendline support to collect fresh buyers off the aforementioned demand.

1.41 put up little fight on Thursday, with price also overthrowing the 100-period simple moving average to the downside in strong fashion.

With reference to the RSI oscillator, you will also note the value entered oversold terrain, testing lows around 26.00.

What’s also supportive of a bid hitting the charts, of course, is the monthly chart trading north of trendline resistance and daily price crossing swords with support from 1.4011.