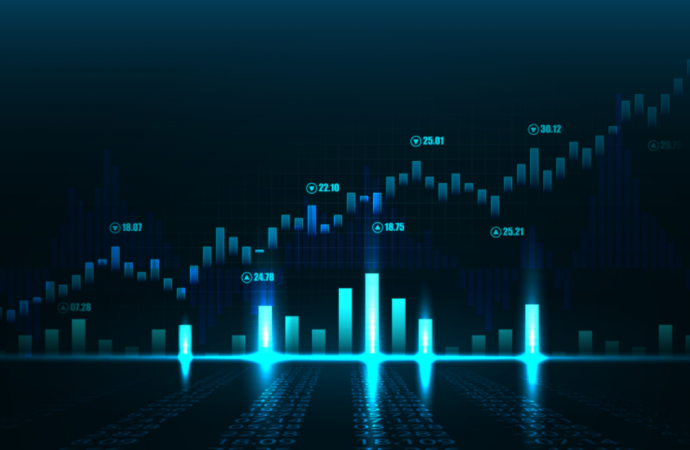 Risk sentiment took a clobbering on Thursday in direct response to a ‘full-scale’ Russian invasion of Ukraine. Investors flocked to safer assets, such as the US dollar. The US dollar index (USD) refreshed YTD pinnacles at 97.74 and lent on EUR/USD demand, down more than 1 percent on the session.

Recent weakness is in line with the weekly timeframe’s technical position. For those who read recent technical writing you may recall the following:

Although the current geopolitical situation will remain the main driver of price action, technical studies suggest H1 resistance between $1.1216 and $1.1200 could welcome a bearish scene. This is strengthened by higher timeframe direction pointing to the possibility of deeper levels in coming weeks (possibly days).

Against a broadly stronger US dollar, the Australian dollar shook hands with the prior weekly low ($0.7086) on Thursday, weighed by geopolitical headlines.

Technical developments show subdued demand coming out of the weekly timeframe’s prime support at $0.6968-0.7242. In terms of trend, you may recall the following from previous writing:

Longer term—the monthly timeframe—has portrayed a downtrend since August 2011, suggesting the 12.6 percent correction from mid-Feb tops at $0.8007 (2021) on the weekly timeframe might be the start of a bearish phase and not a dip-buying correction from the 2021 advance from pandemic lows of $0.5506. This places a question mark on weekly prime support, which has failed to ignite much bullish interest since late November 2021. If a break lower should come to pass, weekly support at $0.6673 and a 50% retracement at $0.6764 are visible.

Technical observations from the daily timeframe reveals resistance between $0.7336 and $0.7278 (made up of a 200-day simple moving average, trendline resistance [taken from the high $0.7891], and Quasimodo resistance) served well, following Wednesday’s shooting star (bearish) candlestick. The daily decision point calls for attention at $0.6964-0.7040, with the relative strength index (RSI) on the verge of dipping a toe in waters south of the 50.00 centreline (negative momentum), following a clear rejection from indicator resistance at 58.43.

A closer reading of price movement on the H4 and H1 timeframes show a recovery phase emerged from $0.71 on the H1, heading into US trading on Thursday, joined by the H4 timeframe’s Quasimodo support from $0.7109. Upside objectives are seen around trendline support-turned resistance, taken from the low $0.6968, on the H4 scale, closely linked with $0.72 on the H1.

Medium term, further weakness is possible. According to the daily scale, scope to test $0.6964-0.7040 is visible. With this being the case, the area between $0.72 on the H1 and the H4 timeframe’s trendline support-turned resistance could deliver a ‘ceiling’ to work with.

Despite early hours unleashing intense selling on the back of a safe-haven bid, USD/JPY finished Thursday on the front foot in the shape of a daily bullish outside reversal. This places daily Quasimodo resistance back in the mix at ¥116.33. Note the daily relative strength index (RSI) is also showing signs of respecting support between 40.00 and 50.00 (a ‘temporary’ oversold range since 10th May—common view in trending markets).

In terms of the H4 timeframe, it is quite a (technical) sight. Recent flow ‘completed’ a H4 AB=CD bullish formation (black arrows to the downside) at the 61.8% Fibonacci ratio from ¥115.64 (derived from legs A-D of the bullish pattern). Note that above ¥115.64, a trendline support-turned resistance is seen, extended from the low ¥113.47, with subsequent upside interest casting light on the daily Quasimodo resistance mentioned above at ¥116.33. As for the H1 timeframe, Quasimodo resistance is overhead at ¥115.75, followed closely by ¥116. This follows an earlier retest of resistance-turned support from ¥115.31.

With risk sentiment clearly underpinning the buck on Thursday, sterling voyaged to lows not seen since late December 2021. Recording its largest one-day loss since November 2021, the technical picture reveals daily price welcomed support at $1.3355. Under this level, Quasimodo support is seen at $1.3119. This followed nearly a month of hesitation around daily resistance at $1.3602—stationed under the 200-day simple moving average at $1.3673.

Regarding trend and weekly structure, recent reports highlighted the following:

Meanwhile on the H4 timeframe, the unit pencilled in a bottom a handful of pips ahead of an AB=CD bullish formation at $1.3263. A potential headwind for the currency pair now is Quasimodo support-turned resistance at $1.3436, joined closely by a 50.00% retracement and a 38.2% Fibonacci retracement around $1.3455. Upstream, we also have resistance plotted at $1.3498.

Having seen H1 resistance at $1.3441-1.3459 join forces with H4 resistance between $1.3455 and $1.3436, this might be a location sellers make an entrance from. However, while H1 and H4 resistance deliver technical confluence, sellers pursuing additional confluence before pulling the trigger is not out of the question. This is due to the daily timeframe rebounding from support at $1.3355.