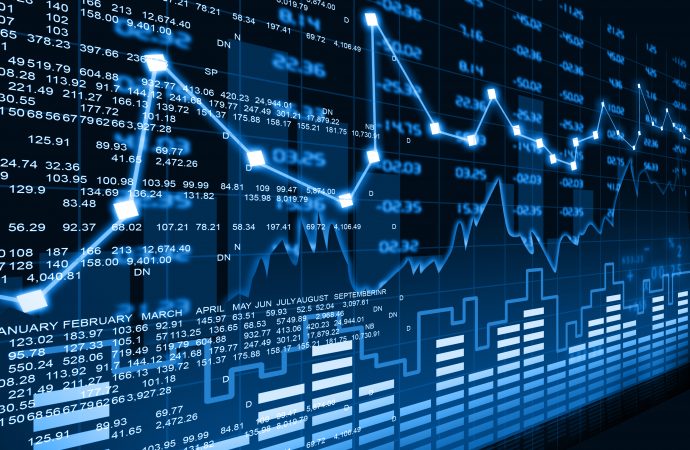 Deteriorating risk sentiment underpinned a USD bid on Wednesday, action pressuring Europe’s single currency. As of writing, EUR/USD is treading water ahead of $1.13 (H1), lower by nearly 0.2 percent. Technical traders will note familiar H1 prime support stationed south of the psychological figure at $1.1264-1.1294. Additional observations reveal the H1 timeframe has been rangebound between the said supports and supply coming in at $1.1407-1.1386 (houses $1.14) since mid-February.

Against the backdrop of lower timeframe flow, the daily chart has trendline resistance-turned support, taken from the high $1.2254, intersecting with the noted H1 and H4 prime supports. Technically, although this adds weight to these zones, longer-term trend studies show a break of trendline support could be on the menu.

Those who read recent technical reports may recall the following points made on higher timeframe trend and technical structure:

Technically, according to trend, a downside bias has been in play since topping at $1.2350 at the beginning of January (2021) on the weekly timeframe. This is reinforced by a weekly trendline support breach, drawn from the low $1.0636, together with the break of the $1.1602 November 2020 low (circled) and the retest of weekly resistance at $1.1473-1.1583. Continued interest to the downside on the weekly chart could overthrow 28th January low at $1.1121 and bring attention to as far south as Quasimodo support at $1.0778—area not seen since pandemic lows of March 2020.

Lower on the curve, the daily timeframe witnessed a trendline resistance breach in early February, movement conflicting with the weekly timeframe’s bearish environment. Yet, the $1.1483 14th January peak (marked Key WATCH) echoing muscular resistance between 4th and 10th February, along with a subdued bid from trendline support and the relative strength index (RSI) dipping a toe under 50.00, airs a bearish vibe, in line with the weekly scale. Dethroning the noted trendline pulls interest towards daily prime support mentioned above at $1.1161-1.1199.

Given rangebound behaviour, the technical outlook for EUR/USD remains unchanged.

Therefore, interested buyers are likely to adopt a cautious stance and seek additional confirmation before pulling the trigger.

Technically speaking, notable resistance also made an entrance in recent trading: daily resistance between $0.7339 and $0.7278 (made up of a 200-day simple moving average, trendline resistance [taken from the high $0.7891], and Quasimodo resistance), and H1 trendline support-turned resistance, extended from the low $0.6968.

It is important to note that while we are coming from a dense technical ‘ceiling’, the weekly timeframe continues to forge a ‘floor’ within the walls of prime support at $0.6968-0.7242. However, siding with daily and H1 resistances is the overall trend. For those who read previous technical writing you may recall the following:

Longer term—the monthly timeframe—has portrayed a downtrend since August 2011, suggesting the 12.6 percent correction from mid-Feb tops at $0.8007 (2021) on the weekly timeframe might be the start of a bearish phase and not a dip-buying correction from the 2021 advance from pandemic lows of $0.5506. This places a question mark on weekly prime support, which has failed to ignite much bullish interest since late November 2021. If a break lower should come to pass, weekly support at $0.6673 and a 50% retracement at $0.6764 are visible.

With the above in mind, technical support targets likely on the radar are H1 channel support, pencilled in from the low $0.7086, followed by $0.72 as well as H4 trendline support, drawn from the low $0.6968. Assuming the currency pair extends losses, the daily timeframe unearths a possible dip towards a decision point from $0.6964-0.7040.

Medium term, attention remains on daily resistance between $0.7339 and $0.7278, in line with the current downside bias. However, the weekly timeframe’s prime support from $0.6968-0.7242 also remains a point of interest for now.

Lower on the curve, scope to navigate deeper water is evident until shaking hands with H1 channel support, pencilled in from the low $0.7086, followed by $0.72 as well as H4 trendline support, drawn from the low $0.6968.

With that being the case, traders may view this as an opportunity to drill down to shorter-term timeframes and pursue lower timeframe bearish formations.

Against the Japanese yen, the US dollar has been somewhat rangebound between ¥115.24 and ¥114.50 in recent days. Technically, however, there’s still plenty to discuss.

For those who read the recent technical report you may recall the following:

As evident from the H4 chart, recent movement did indeed cross swords with the 61.8% Fibonacci retracement at ¥114.57. This effectively ‘completes’ the AB=CD bearish pattern that triggered around daily Quasimodo resistance at ¥116.33, and brought in the H4 ABCD bullish configuration off the 61.8% Fibonacci level. Price has already reached the 38.2% Fibonacci retracement (derived from legs A-D of the bullish pattern) at ¥115.21, with the possibility of ‘completing‘ the pattern at the 61.8% Fibonacci retracement ratio at ¥115.64 (also derived from legs A-D of the bullish pattern). Supporting the likelihood of additional buying is the H1 timeframe, breaking above a trendline resistance (taken from the high ¥116.34) and retesting the breached level in recent hours. Also of technical note is H1 support at ¥114.82.

In terms of the higher timeframes, you may recall the following analysis:

BoE’s Tenreyro—a known ‘dove’—said on Wednesday ‘only a small amount of tightening is needed’, clearly pushing against aggressive monetary policy tightening. This, coupled with mounting geopolitical worries between Russia and the Ukraine, watched sterling slip 0.3 percent against its US counterpart.

Daily resistance remains in the spotlight at $1.3602, organised under the 200-day simple moving average, circling $1.3680. Further weakness from here shines light on support at $1.3355, with follow-through downside perhaps throwing Quasimodo support into the mix at $1.3119. Of note, the aforementioned support shares chart space with the weekly timeframe’s double-top pattern’s profit objective at $1.3090. In terms of momentum, the relative strength index (RSI) is now on the doorstep of its 50.00 centreline, with a break informing traders average losses are exceeding average gains.

With the above in mind, traders might attempt to locate intraday bearish setups, targeting $1.3444.