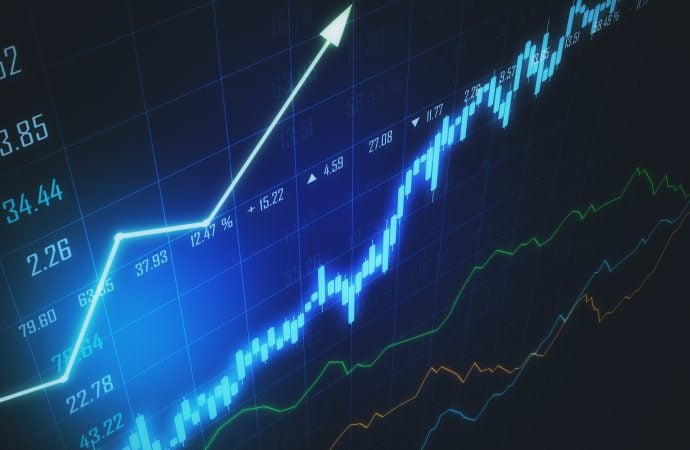 February, as you can see, remains considerably off worst levels and recently entered positive territory, trading 0.1 percent higher. Closing the month out at current prices, in the form of a hammer candle (bullish signal at troughs), is likely to excite candlestick enthusiasts.

The USD, as measured by the US dollar index, staged a modest recovery Tuesday, snapping a three-day bearish phase. This witnessed EUR/USD fade session peaks and produce a well-known candlestick formation, commonly labelled as a shooting star—a bearish pattern.

Resistance at 1.2179 proved an effective base once again on Tuesday, capping upside. Bearish bets, although appearing to be drying up, could eventually direct price action towards trendline support, extended from the low 1.1952.

Despite an early slump heading into London on Tuesday, volatility thinned considerably for the remainder of the day, ranging between 1.2166 and 1.2134.

Out of the RSI indicator, the value is currently entrenched within the walls of two converging trendlines, forming what many may recognise as a bearish pennant pattern.

With monthly price displaying scope to scale higher, alongside H4 sellers showing little interest off resistance at 1.2179, targeted supports today may be the H1 trendlines from lows 1.2036 and 1.2023.

Despite AUD/USD taking a breather yesterday and establishing an indecision candle, the pair remains testing the mettle of supply from 0.7937/0.7890. Therefore, the possibility of additional upside unfolding today is still there, targeting supply coming in from 0.8045/0.7985 (located south of monthly supply at 0.8303/0.8082).

Retracing from fresh 2021 highs, Tuesday reconnected with support at 0.7897 (a prior Quasimodo resistance level).

With buyers and sellers currently battling for position around the aforesaid support level, in a market trending higher since 2020, Quasimodo resistance seen at 0.7966 is likely to be on the radar for many technical traders today.

Whipsawing through the 0.79 figure to within touching distance of demand at 0.7857/0.7877, price went forward and reclaimed 0.79+ status heading into the US session on Tuesday.

Forming a position north of 0.79 today could have buyers invade Tuesday’s peak at 0.7934, with subsequent upside to possibly reach for 0.7950.

In line with the above, the RSI is rebounding from the 50.00 centreline.

Following January’s bullish engulfing candle, buyers have attempted to find some grip in February, up by 0.6 percent.

Snapping a four-day losing streak, boosted on USD strength, USD/JPY is on the brink of retesting the 200-day simple moving average at 105.48.

With respect to the RSI indicator, the value is flirting with support at 57.00.

Resistance at 105.40 made its way on the scene Tuesday—a previous Quasimodo support base—and served short-term sellers well. Upstream, technical eyes are likely fixed on the 100-period simple moving average around 105.47, with subsequent buying to possibly draw in Quasimodo resistance at 107.73.

105 support also remains a point of interest on the H1 scale, fixed just north of Quasimodo support at 104.91.

Long term, sellers appear in control at the moment, south of the 200-day simple moving average, targeting February 10th trough at 104.40 (daily timeframe—see above). This, of course, could weigh on buying derived from January’s bullish engulfing candle.

The RSI continues to trek overbought terrain, reaching highs of 76.20 yesterday. Bear in mind, the indicator can remain overbought for prolonged periods in trending environments.

Supply drawn from 1.4111/1.4091 made an entrance on Tuesday, yet was unable to prompt much in terms of bearish flow. Northbound, technical action notes channel resistance, pencilled in from the high 1.3855, closely followed by resistance plotted at 1.4154.

Bolstered on UK PM Johnson setting out a schedule for easing lockdown, we witnessed short-term flow scale above the 1.41 figure and in recent hours retest the latter in the shape of a hammer candle—often interpreted as a bullish signal.

Although RSI bearish divergence is in view, the 1.41 retest could welcome a bullish scenario today, targeting 1.4150 resistance.

Monthly price taking in the view north of trendline resistance, together with room for daily buyers to invade resistance at 1.4250 and H4 supply at 1.4111/1.4091 displaying a fragile tone, could have H1 buyers lift the currency pair higher from 1.41 today, with at least 1.4150 resistance in sight.