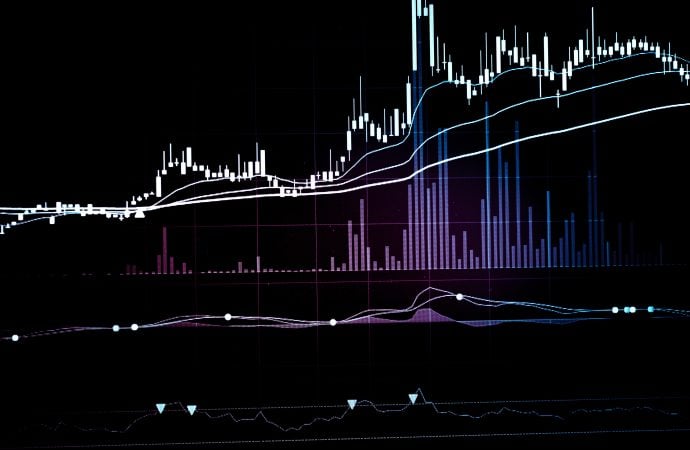 February, as you can see, remains off session lows, though currently trades 0.8 percent lower.

EUR/USD extending losses on Wednesday led price movement through support drawn from 1.2087 and 1.2057. Run-of-the-mill demand resides around the 1.2035 region (red arrow), though bearish bets may take aim at trendline resistance-turned support, extended from the high 1.2349.

RSI recently rebounded off support from 20.64 and exited oversold space.

Shorter-term flow reveals H4 nudged under support at 1.2057, therefore a bearish theme could emerge until we shake hands with nearby trendline support.

January’s half-hearted shooting star candle (often construed as a bearish indication at peaks) has so far failed to seduce sellers. February, as you can see, trades a touch off session highs, up by about 1.5 percent.

Resistance at 0.7769 remains in play. Though traders are encouraged to note the drop-base-rally demand zone at around the 0.7727ish region (green) is also attracting a modest bullish defence.

As evident from the chart, support at 0.7698, a previous Quasimodo resistance, is next in line should sellers take on more of a dominant position today.

The 100-period simple moving average around 0.7761 served well as dynamic resistance on Wednesday, directing the H1 candles south of 0.7750.

Quasimodo support is seen at 0.7719, with a break uncovering the 0.77 figure. Bullish impetus, movement that takes the currency pair north of the 100-period simple moving average, could lead things back to resistance at 0.7777, followed by 0.78.

Retesting 0.7750 resistance could spark a short-term bearish scenario towards 0.77 on the H1 (H1 Quasimodo support is potentially fragile having seen the level tested last Friday).

Up by 1.2 percent, resistance can be seen in the form of a descending line (not considered traditional trendline resistance), etched from the high 118.66, whereas support continues to inhabit 101.70 in the event sellers make a show.

Wednesday witnessed sellers step forward within the walls of supply from 106.33/105.78, following Tuesday’s dynamic push above the 200-day simple moving average at 105.52. Snapping a five-day winning streak, yesterday’s action could spark a retest at the aforementioned SMA.

The RSI indicator exited overbought waters and produced bearish divergence. Support remains on the table around 57.00.

106 proved a fragile level yesterday, yet support drawn from 105.80 (previous Quasimodo resistance). South of here, we also have two trendline supports to be mindful of, extended from the low 104.55 and 104.41, along with a 100-period simple moving average.

The RSI indicator, as you might expect, in view of the upside movement since last week, continues to explore overbought territory. Notice that support also formed around the 44.00ish range, a common scenario in a rising market.

The reaction from daily supply at 106.33/105.78 might tempt sellers to extend the unit lower and retest the 200-day simple moving average around 105.52. Given the monthly timeframe’s bullish position right now (see above), a dip to the SMA could spark a bullish theme. Note the SMA also coincides closely with H4 demand at 105.26/105.41.

After Tuesday’s indecision candle connected with supply at 1.3996/1.3918 and refreshed 2021 highs, Wednesday saw sellers step forward and shine light on support from 1.3755.

RSI action recently broke above the upper edge of a 3-month range between support around 47.00 and resistance at the 66.00 region (the value stands at 67.67), though recently retreated back into the consolidation after coming within touching distance of overbought levels.

RSI movement bottomed ahead of oversold levels on Wednesday and is within touching distance of the lower side of 50.00.

In similar fashion to Wednesday’s writing, the monthly timeframe eyeing 1.4376, in addition to H4 price testing support at 1.3852 and H1 1.3850 support, this could have buyers take the spotlight and attempt to bring things over the 100-period simple moving average on the H1 today.