February 15th 2022: Technical View Ahead of US PPI Data 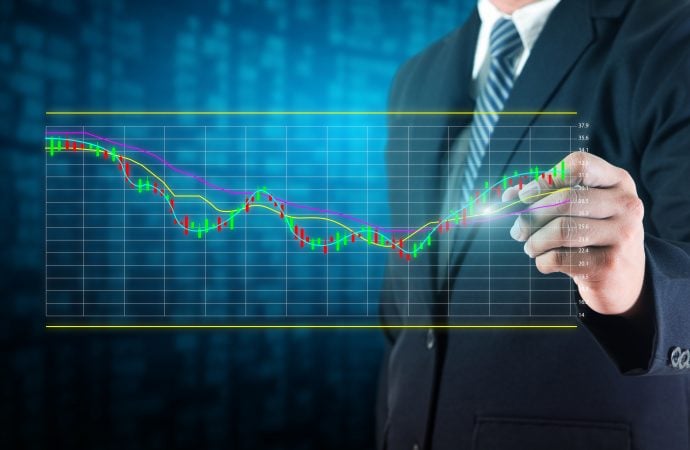 Europe’s shared currency wrapped up another session underwater against its US counterpart on Monday, down 0.3 percent at the close of London.

The combination of rising US Treasury yields—benchmark 10-year note engaging the underside of 2 percent—together with a reasonable USD bid (USDX cements position north of 96.00) and a bout of risk aversion, weighed on EUR/USD.

Technically, according to trend, a decisive downside bias has been in play since topping at $1.2350 at the beginning of January (2021) on the weekly timeframe. This is reinforced by a trendline support breach, drawn from the low $1.0636, and the break of the $1.1602 November 2020 low (circled).

Fading the lower side of weekly resistance at $1.1473-1.1583 last week, therefore, should not surprise for those following the trend—an active S/R since late 2017. While a break higher may eventually direct the technical spotlight towards weekly supply at $1.1981-1.1848, navigating south is the more likely channel, given the trend. This could have the unit target as far south as weekly Quasimodo support from $1.0778.

Out of the daily timeframe, price is addressing trendline resistance-turned support, extended from the high $1.2254. This follows last week’s action handing the baton to sellers at the $1.1483 14th January peak (marked key watch). Breaching the aforementioned trendline support throws light on prime support from $1.1161-1.1199. While February taking out trendline resistance is considered a bullish signal, $1.1483 withstanding bullish attempts informs traders that a bullish trend reversal on the daily chart is questionable at the moment. Momentum studies on the daily chart, by way of the relative strength index (RSI), saw the indicator’s value dip a toe in waters south of the 50.00 centreline. Running below here signals momentum to the downside is gaining traction—average losses exceeding average gains.

Longer term—the monthly timeframe—has portrayed a downtrend since August 2011, suggesting the 12.6 percent correction from mid-Feb tops at $0.8007 (2021) may be the start of a bearish phase and not a correction from the 2021 advance from pandemic lows of $0.5506.

Meanwhile, price action on the daily timeframe remains comfortable under its 200-day simple moving average, currently flirting with $0.7359. Structurally, Quasimodo resistance resides at $0.7278, shadowed closely by two trendline resistances, drawn from highs of $0.8007 and $0.7891. Downstream, a familiar decision point is nearby at $0.6964-0.7040, set above Quasimodo support from $0.6901. It may also interest some traders to note that the relative strength index (RSI) continues to test the 50.00 centreline. Assuming the value secures position above here, this highlights positive momentum (average gains exceeding average losses). Conversely, defending 50.00 underpins the bearish presence.

The weekly timeframe’s 1.272% Fibonacci projection at ¥116.09 remains a clear headwind for the time being. In view of the current trend, though, weekly channel support, drawn from the low ¥102.59, is structure longer-term traders are also likely monitoring.

The daily timeframe’s double-bottom pattern’s (¥113.48) profit objective came within reach of being tested last week at ¥116.63. As you can see, the second half of the week, topped at Quasimodo resistance from ¥116.33. Below the double-bottom pattern’s limit, demand resides at ¥112.66-112.07, an area not only in the company of a 78.6% Fibonacci retracement at ¥112.00 and a 50% retracement from ¥112.55, but also coordinating closely with weekly channel support underlined above. Note the relative strength index (RSI) recently recoiled from support between 40.00 and 50.00 (a ‘temporary’ oversold range since 10th May—common view in trending markets). This suggests positive momentum until overbought levels are tested.

From the H4 timeframe, the currency pair discovered a floor around a 38.2% Fibonacci retracement at ¥115.25, a level derived from A-D legs of an AB=CD structure (black arrows) that converged with daily Quasimodo resistance underlined above at ¥116.33. Technicians will acknowledge H4 trendline support resides nearby, drawn from the low ¥113.47.

The overall trend in this market favours buyers at the moment. Weekly channel support and daily demand from ¥112.66-112.07, therefore, delivers a possible dip-buying area to watch over the coming weeks.

Short-term chart studies, however, remain fixed on H1 prime support on the H1 at ¥114.90-115.01, given it aligns closely with H4 trendline support.

UK’s pound sterling settled 0.2 percent lower versus the US dollar on Monday amidst risk-off trading—global equities took a beating in response to increased tensions between Russia and the Ukraine.

Longer-term trend direction has been southbound since late 2007 tops at $2.1161. As a result, the move from pandemic lows in March 2020 could be viewed as a pullback within the larger downtrend. This places a question mark on the 7.5 percent ‘correction’ from February 2021 to December 2021; it may in fact be the beginning of a longer-term push to the downside and not a dip-buying scenario. Nevertheless, technical structure visible on the weekly timeframe consists of resistance at $1.4371-1.4156 (potential compressed supply appears between $1.3983 and $1.3834 [blue arc]) and a double-top pattern’s ($1.4241) profit objective at $1.3090 (red boxes).

Daily resistance has taken the spotlight in recent days at $1.3602, organised under the 200-day simple moving average, circling $1.3696. Weakness from here shines light on support at $1.3355, with follow-through downside perhaps throwing Quasimodo support into the mix at $1.3119. Of note, the aforementioned support shares chart space with the weekly timeframe’s double-top pattern’s profit objective at $1.3090. In terms of momentum, the relative strength index (RSI) remains just above its 50.00 centreline, informing traders average gains are exceeding average losses at the moment: positive momentum.

H4 Quasimodo resistance-turned support at $1.3498 made an entrance on Monday and has delivered a floor for the moment. Of particular importance is prime support located at $1.3428-1.3444. This is a fresh zone that’s in good shape, placed to take advantage of ‘sell-stop momentum’ beneath $1.3498.