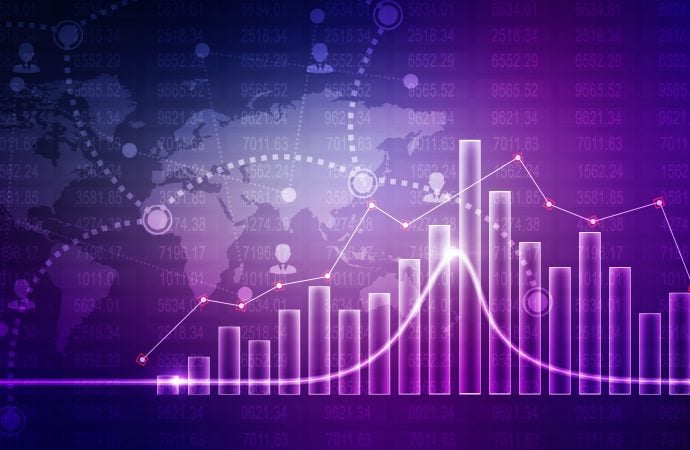 Tuesday extended recovery gains by 0.6 percent, finishing at session pinnacles. The next upside target on the daily scale can be seen around 1.2190 tops, with a break unmasking Quasimodo resistance from 1.2278.

Supply at 1.2136/1.2119 made its way into the light in recent hours, an area sharing space with a descending resistance, extended from the high 1.2189 (it should be noted this is not a textbook trendline resistance). Though given the convergence of the two areas, sellers are likely to try and guard noted supply.

Interestingly, above supply and descending resistance, the H4 Quasimodo resistance mentioned above at 1.2142 is plotted close by.

RSI devotees will see trendline support put in an appearance yesterday and nudged the value back into overbought space. RSI resistance is a key watch around 78.97—capped upside momentum on a handful of occasions since mid-January.

Monthly, daily and H4 price action, according to our chart studies, call for higher levels. In light of this, H1 supply and descending resistance are perhaps fragile.

Anyone feel a fakeout of H1 stops to test the H4 Quasimodo level could be on the menu?

January’s half-hearted shooting star candle (often interpreted as a bearish signal at peaks) has so far failed to seduce sellers. February, as you can see, trades around session highs, up by 1.3 percent.

RSI flow elbowed back above 50.00 in recent moves, with the value now within a stone’s throw from reaching RSI trendline resistance.

Additional Quasimodo resistance can be found at 0.7747, with a breach perhaps directing focus to resistance at 0.7805.

As anticipated, the 0.77 figure did a superb job as support on Tuesday as buyers lifted the currency pair north of the aforesaid psychological level in early trade.

This has thrown light on 0.7750 resistance and, of course, H4 Quasimodo resistance underlined above at 0.7747.

Fresh short-term bearish RSI divergence on the RSI window also remains a key point to be mindful of.

0.7750 resistance, together with H4 Quasimodo resistance at 0.7747, could attract a pocket of offers and thereby cap short-term buying.

However, having seen daily and monthly charts exhibit scope to navigate higher terrain, the 0.7750 neighbourhood is unlikely to deliver much to write home about.

With the above taken into account, a 0.7750 breach could trigger short-term breakout buying, potentially bound for 0.78 (H1) as a primary upside objective.

Amidst retreating yields and broad-based USD softness, USD/JPY came under reasonable pressure Tuesday and finished at session lows. This, of course, followed the recent rejection from the lower side of supply at 106.33/105.78 and 200-day simple moving average at 105.56.

Further selling could eventually pull things back to trendline resistance-turned support, taken from the high 111.71.

Technical eyes may also be drawn to the RSI indicator, as the value tunnelled through support at 57.00 and trendline support.

Those who read Tuesday’s technical writing may recall the following (italics):

In conjunction with the daily timeframe recently crossing swords with supply and the 200-day simple moving average, recent movement saw H4 bump heads with an alternate AB=CD bearish pattern at the 127.2% Fib extension level from 105.63.

Traditional take-profit objectives from AB=CD formations are 38.2% and 61.8% Fib retracements, which in this case are 104.50 and 103.72, respectively—derived from pattern extremes: A-D legs.

As you can see, recent weakness prodded the 38.2% Fib level at 104.50, representing the initial take-profit objective from AB=CD resistance. Additional selling highlights possible bids around 104.16 support and intersecting trendline support.

104.50 support (joins with the 38.2% H4 Fib level) is now in play thanks to recent selling, though buyers have yet to show much interest.

The daily timeframe’s flow implies longer-term sellers still have the upper hand until crossing swords with trendline support around the 103.70 neighbourhood.

Since the latter part of January, resistance at 1.3755 has remained a problematic ceiling for buyers, despite a clear upside bias in place since 2020. As you can see, however, Tuesday witnessed buyers grow in confidence and overthrow 1.3755, drawing attention to supply at 1.3996/1.3918.

Interestingly, the RSI indicator is seen touching gloves with the upper edge of a 3-month range between support around 47.00 and resistance at the 66.00 region (the value stands at 65.00). It is common to see higher oversold support areas form in an uptrend.

Latest developments on the H1 scale shows price engulfed 1.38 resistance, with enough force to squeeze out the majority of sellers around this neighbourhood. Breakout buyers currently maintain position north of the psychological line, with increased upside interest to throw 1.3850 in the pot as possible resistance (made up of a 161.8% Fib projection at 1.3850 and a 100% Fib extension at 1.3855).

It should also be noted the RSI indicator continues to pursue overbought status, with downside attempts likely to target two trendline support structures.

Monthly price calling for higher levels, along with daily action clearing resistance at 1.3755 in a market trending higher since the beginning of 2020, places long-term buyers in a strong position.