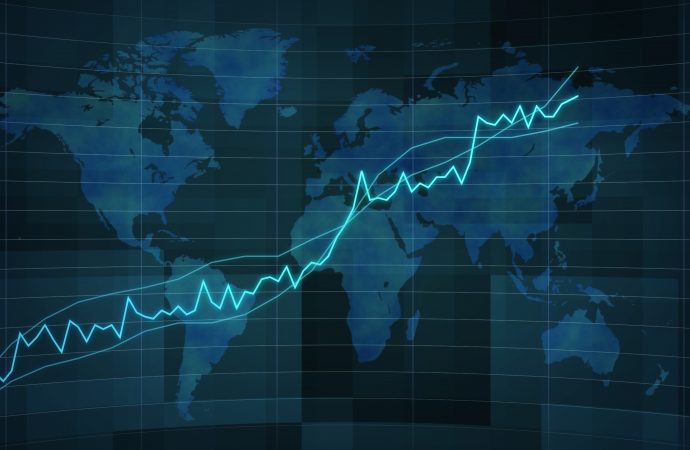 With December trading higher by a healthy 1.6 percent, this argues additional upside may be on the horizon, with ascending resistance (prior support – 1.1641) perhaps targeted.

In tandem with monthly buyers flexing their financial muscle, daily buyers squeezed through the upper perimeter of an early descending wedge pattern (correction) between 1.2011 and 1.1612 (some may interpret this arrangement as a descending triangle pattern) last week, with yesterday modestly toppling resistance at 1.2095.

US trading on Wednesday, following a 1.2050 retest, exhibited a relatively one-sided market, movement that eventually ousted the 1.21 level and threw light on the 1.2150 region. However, with the RSI indicator presenting bearish divergence within overbought space, a 1.21 retest could be on the cards.

Monthly price demonstrating scope to scale higher, together with daily recently dethroning resistance at 1.2095 (albeit marginally), and H1 closing above 1.21, is likely to place pressure on sellers shorting H4 supply from 1.2130/1.2096. 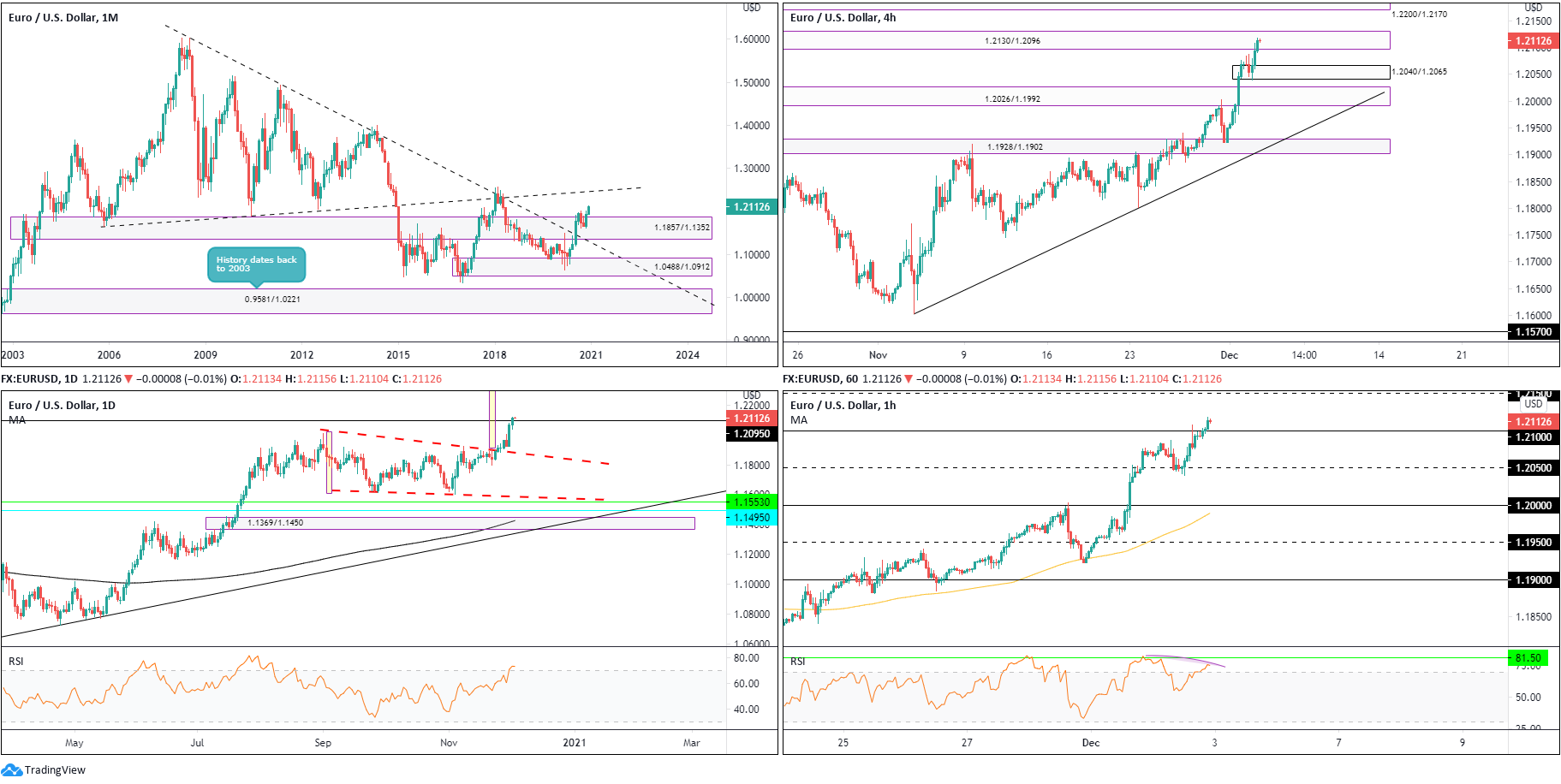 The trend on this timeframe has remained to the upside since March, therefore buyers could be preparing to dethrone 0.7453/0.7384.

Regular readers will note recent analysis announced Monday’s retreat carted price action back to 0.7340 (the upper boundary of an ascending triangle). This was a move buyers clearly welcomed and is a common setup among pattern traders in technical analysis.

With Monday’s peaks at 0.7407 submerged on Wednesday, the September peak at 0.7413 is now being challenged. Above here, crosshairs are likely directed towards 0.7463, the ascending triangle take-profit target (pink).

US trading witnessed a bottom ahead of 0.7350 support, taking the currency pair above the 100-period simple moving average at 0.7373 and eventually unseating 0.74.

Not only did Wednesday’s rally overrun 0.74, the move constructed a demand area around the psychological figure at 0.7391/0.7401, a rally-base-rally zone. This is an interesting area as it was here a decision was made to take out remaining offers at 0.74.

RSI traders, however, will see the value modestly tested overbought levels on Wednesday.

Do higher timeframes suggest we’re headed for the ascending triangle take-profit target on the H4 at 0.7463? If so, a 0.74 retest on the H1 could be interesting.

Areas of consideration on the H4 chart:

A demand breach could lead things towards the 100-period simple moving average at 104.26, with subsequent downside targeting the 104 level.

Monthly price appearing to be on the verge of breaching descending triangle support at 104.62, together with Wednesday’s bearish candle pattern, highlights a weak market. Limited resistance, however, is present on the H4 timeframe until reaching 105.06/104.89 (Fib zone).

Sellers, as you can see, displayed some interest on Wednesday, but finished the session somewhat off lows. Though with monthly trendline resistance making an entrance and daily supply up ahead at 1.3622/1.3467, sellers may eventually take the lead.

Recent developments reveal the ascending wedge pattern, formed between 1.3105/1.3313, had its lower side engulfed Wednesday. Potentially forming a reversal signal, sellers, either those who entered on the breakout, or on the recent pullback, are likely to take aim at 1.3149: the pattern’s take-profit target plotted just under support at 1.3182. This also implies a breach of demand at 1.3240/1.3273.

US trading had buyers and seller square off at 1.33, a familiar area of support since November 23. Confirmed by RSI oversold conditions, buyers swiftly commanded position with enough force to overtake the 100-period simple moving average at 1.3355. The latter, as you can see, is currently being retested as support, with 1.34 resistance next on tap.

The technical setting sub 1.33 is interesting; the absence of demand hints at a possible run to 1.32. With the exception of local tops around 1.3440, the path beyond here also appears reasonably free of supply until 1.35 resistance.

Although monthly price flirts with trendline resistance, daily supply at 1.3622/1.3467 is calling to be tested.

The recent ascending wedge breach on the H4 helps confirm the bearish setting depicted on the higher timeframes. However, before sellers attempt to make a show, traders are urged to consider the possibility price action may first test daily supply. This could mean a break of 1.34 and H1 tops at 1.3440, as well as a deeper test of the underside of the H4 ascending wedge.