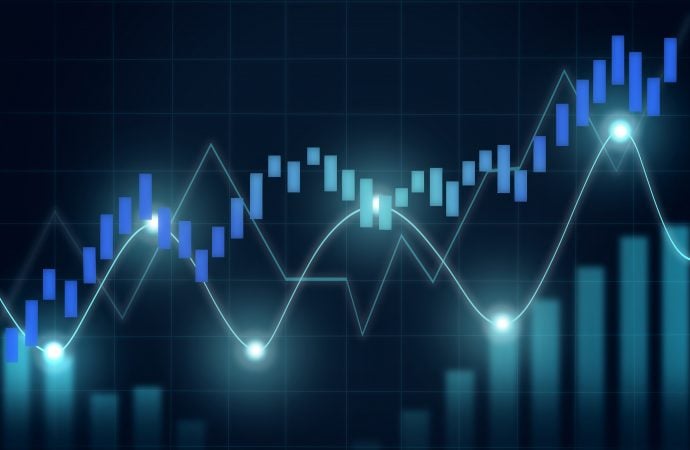 Following the break of long-term trendline resistance (1.6038) in July, and subsequent break of supply from 1.1857/1.1352 in August, a modest correction surfaced. However, buyers making an entrance in November and December currently trading higher by 2.4 percent reasons additional upside may be on the horizon, with ascending resistance (prior support – 1.1641) perhaps targeted.

Daily activity squeezed through the upper perimeter of a descending wedge pattern (correction) between 1.2011 and 1.1612 (not the prettiest of structure here with some maybe interpreting this arrangement as a descending triangle pattern) heading into the final rounds of November. December also overrun resistance at 1.2095, shaping a bullish flag pattern (1.2177/1.2078).

As we head into the final days of what has been a tumultuous 2020, price action is seen consolidating within close range of the descending wedge pattern’s take-profit target at 1.2318 (yellow), and also the bullish flag’s take-profit level at 1.2384 (purple).

The trend on this timeframe has decisively pointed north since March (secondary trend).

We can also see the RSI entered overbought space and formed a double-top pattern. Note the neckline at 68.27 was recently penetrated.

Since December 17, the H4 has shaped a symmetrical triangle (1.2271/1.2129) – a consolidation pattern formed beneath neighbouring resistance from 1.2255. A breakout north may witness buyers strive for supply at 1.2351/1.2333, conveniently set a few pips above the daily descending wedge pattern’s take-profit target at 1.2318 (yellow). A breakout lower could see trendline support (1.1602) make a show.

The Christmas period witnessed EUR/USD gradually compress higher, moulding an ascending channel (1.2160/1.2221). Additional structure to be mindful of is the 1.2250 resistance and 1.22 support (and 100-period simple moving average).

As aired in our last technical report, higher timeframes display room to rally on the monthly chart, in addition to the two bullish patterns in play on the daily timeframe. This implies buyers could attempt to refresh year-to-date highs.

A H4 close above the symmetrical triangle (1.2271) and H4 resistance at 1.2255 helps confirm upside interest and provides traders a possible entry long.

H1 traders, however, may seek a bullish theme around the 1.22 support, a level currently intersecting with channel support (1.2160). 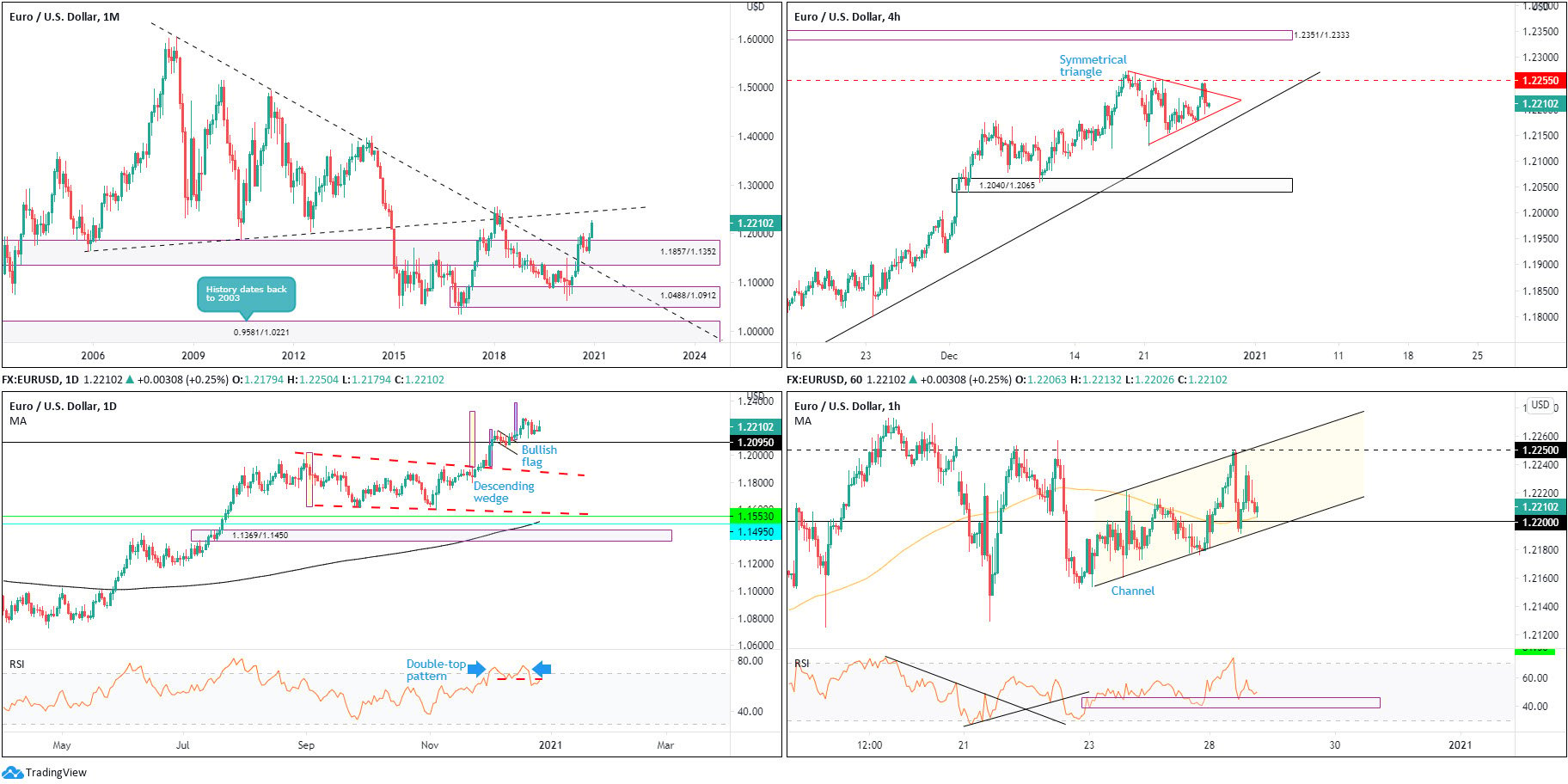 On track to close out 2020 in positive territory, December currently trades higher by 3.2 percent following November’s 4.5 percent rebound from demand at 0.7029/0.6664 (prior supply).

Bottoming within close range of demand at 0.7453/0.7384 (prior supply) directs light towards 0.7674 resistance. Despite this, the RSI indicator recently visited resistance around 80.19, a level in play since 2003, and exited overbought terrain, with additional downside momentum targeting support at 52.00.

The trend on this timeframe is considered north.

Heading into the final few hours of trading Monday, intraday price action is seen mingling with the lower side of the 100-period simple moving average, a handful of pips north of demand at 0.7545/0.7555.

Traders will also note the RSI pushed through 50.00 and is on course to tackle oversold territory.

The daily timeframe showing space to attack resistance at 0.7674, on top of monthly price calling for higher ground, throws light on H1 demand at 0.7545/0.7555 as a place dip-buyers may find interest in.

December, currently down by 0.4 percent, is seen attempting to pursue terrain beneath 104.62.

Buyers and sellers are currently squaring off around last Monday’s high at 103.89 (essentially the upper side of the H4 timeframe’s ascending triangle pattern), following a dominant push above 103.50 resistance and the 100-period simple moving average.

104 is sited as the next possible resistance, with a break unearthing H4 resistance at 104.14.

Also notable is the RSI indicator lingering ahead of overbought space.

Shorter-term price action is focussed around the upper side of the H4 timeframe’s ascending triangle pattern at 103.89. 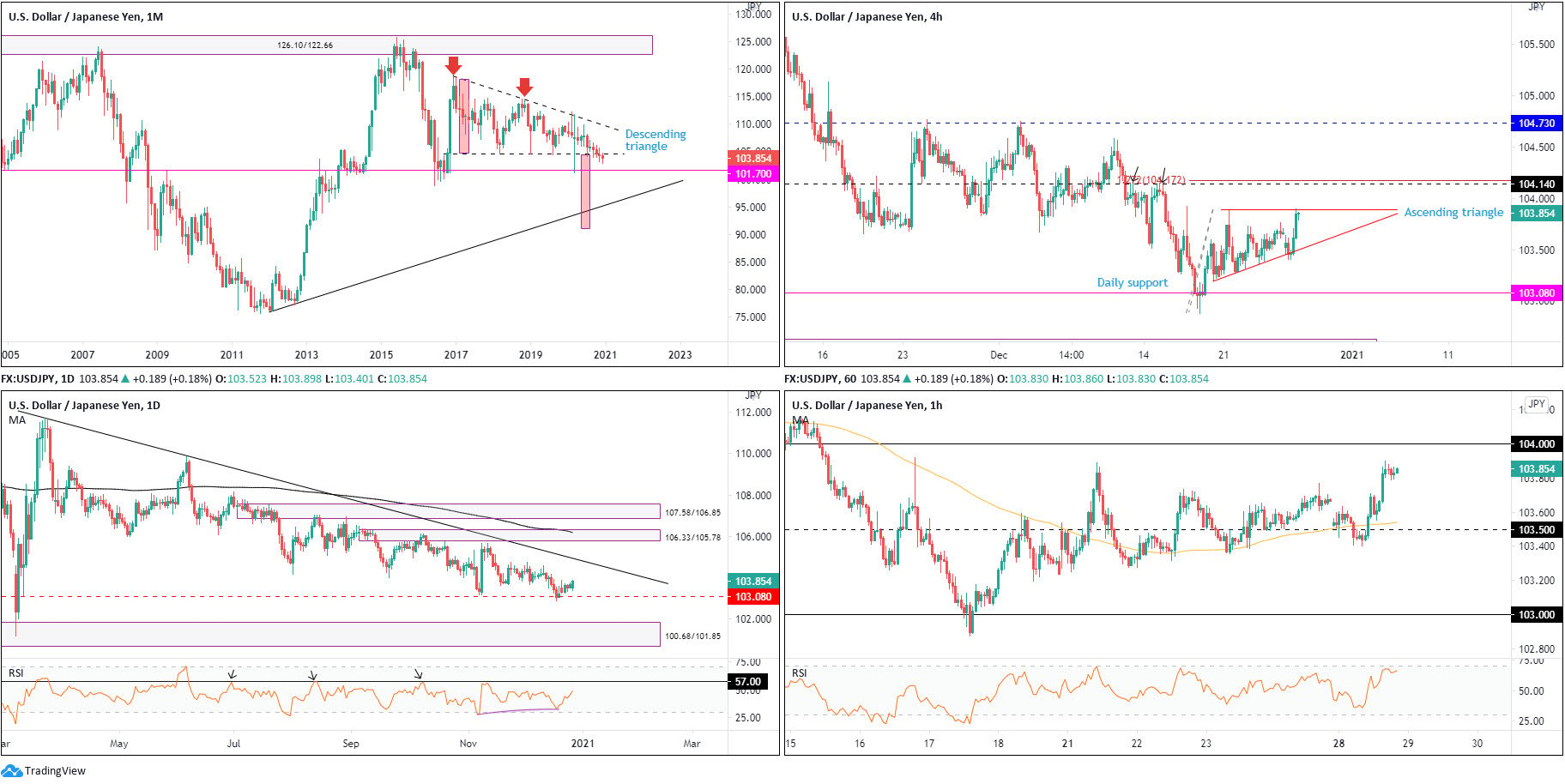 Supply at 1.3622/1.3467 has represented an area of importance since June 2018 on the daily chart. However, having seen September’s reaction fail to deliver a concrete lower low, together with December’s response unable to capsize support at 1.3176, buyers still appear to have the upper hand.

The RSI reveals strong support around 47.00, with resistance forming at the 66.00 region.

H4 action failed to find acceptance above 1.3607 resistance, a level which put a cap on upside mid-December. Monday is currently down by 0.7 percent and, aside from support potentially emerging from the December 22 low at 1.3303, chart studies show scope to approach 1.3182 support (and trendline support [1.2687]).

Monthly trendline resistance remains in the fight, though with daily supply at 1.3622/1.3467 currently on shaky ground this suggests price may visit daily resistance at 1.3755.

Interested buyers out of the H1 Fib support zone at 1.3424/1.3453 are likely to tread cautiously. Buyers must contend with monthly trendline resistance, daily supply at 1.3622/1.3467 (albeit fragile), a lack of demand on the H4 and possible resistance emerging from the 100-period simple moving average.

With the above in mind, a bearish scene might unfold if 1.34 gives way on the H1, underlining 1.33 support as a potential target.