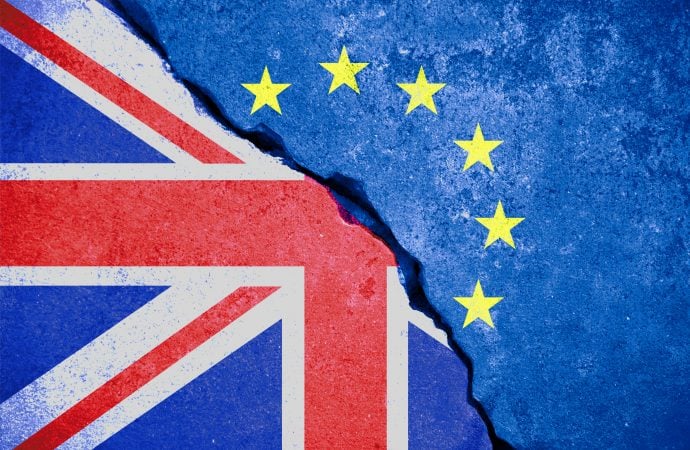 Following the break of long-term trendline resistance (1.6038) in July, and subsequent break of supply from 1.1857/1.1352 in August, a modest correction surfaced. However, buyers making an entrance in November and December currently trading higher by 2.6 percent reasons additional upside may be on the horizon, with ascending resistance (prior support – 1.1641) perhaps targeted.

Daily activity, as you can see, squeezed through the upper perimeter of a descending wedge pattern (correction) between 1.2011 and 1.1612 (not the prettiest of structure here with some maybe interpreting this arrangement as a descending triangle pattern) heading into the final rounds of November. December also overrun resistance at 1.2095, shaping a bullish flag pattern (1.2177/1.2078).

As we head into the final weeks of what has been a tumultuous 2020, price action, despite Monday’s dip to 1.2129, is seen closing in on not only the descending wedge pattern’s take-profit target at 1.2318 (yellow), but also the bullish flag’s take-profit level at 1.2384 (purple).

The trend on this timeframe has decisively pointed north since March (secondary trend). We can also see the RSI recently penetrated overbought space, which is common viewing during an uptrend and may not necessarily indicate a weakening market. 80.62 resistance, however, is a key level to keep an eye on, an active barrier since the beginning of 2000.

Demand at 1.2200/1.2170 greeted downside pressure Monday. Despite whipsawing to lows ahead of trendline support (1.1602), the aforesaid support zone survived and prompted moves back to neighbouring resistance from 1.2255. A breakout north may witness buyers strive for supply at 1.2351/1.2333, conveniently set a few pips above the daily descending wedge pattern’s take-profit target at 1.2318 (yellow).

Following nine successive H1 bullish candles, a move that dethroned 1.22 resistance and the 100-period simple moving average, 1.2250 resistance made an entrance. While potentially tempting a 1.22 retest today, rupturing 1.2250 signals fresh year-to-date highs could be on the table, with subsequent upside taking on 1.23.

As aired in yesterday’s technical report, higher timeframes display room to rally on the monthly chart, in addition to the two bullish patterns forming on the daily timeframe. This implies buyers could attempt to refresh year-to-date highs.

A H4 close above resistance at 1.2255 helps confirm upside interest and provides traders a possible entry long. Available resistances surface around the 1.23 level on the H1, the daily descending wedge pattern’s take-profit target at 1.2318 and H4 supply at 1.2351/1.2333.

On track to close out 2020 in positive territory, December currently trades higher by 3.3 percent following November’s 4.5 percent rebound from demand at 0.7029/0.6664 (prior supply).

Bottoming within close range of demand at 0.7453/0.7384 (prior supply), Monday’s session settled by way of a dragonfly doji pattern. Although this directs light towards 0.7674 resistance, the RSI indicator is seen crowding overbought space, visiting resistance around 80.19, a level in play since 2003.

The trend on this timeframe is considered north.

Although trendline support (0.6991) suffered a horrid whipsaw to lows at 0.7462 yesterday, buyers made a strong comeback in later hours and discovered a foothold above the aforesaid trendline.

Buyers, as you can see, regained consciousness mid-way through London on Monday, retaking control of 0.75 and toppling supply at 0.7545/0.7527, together with resistance at 0.7547. Traders will also note the RSI pushed through trendline resistance.

December, currently down by 1.0 percent, is seen pursuing terrain beneath 104.62.

Support at 103.08 emerged in the latter half of last week. While efforts to hold the level were evident Friday, the session, much like Monday’s session, finished considerably off best levels.

With USD/JPY trending lower since March, and buyers failing to accomplish much off 103.08, the RSI indicator’s bullish divergence signal is on soft ground. RSI enthusiasts will also note momentum has remained under 57.00 resistance since July (common in a downtrend).

Following an AB=CD pullback to resistance at 103.70, sellers stepped forward Monday and took on bids ahead of daily support at 103.08.

Leaving 104 resistance unopposed on Monday, intraday price action dropped through the 100-period simple moving average and has mildly paused ahead of local support around 103.25. Continued bearish interest beyond the latter throws light on 103 and a 127.2% Fib projection at 103.01.

Also notable is the RSI indicator breaching trendline support and overrunning the 50.00 level. This implies additional downside momentum could be seen.

Shorter-term price action suggests 103 support on the H1 is likely to make an entrance, having seen limited confluence supporting H1 support at 103.25. Given 103 is positioned around daily support at 103.08 and boasts H1 Fib confluence, buyers are unlikely to give up 103 without a fight, regardless of monthly price suggesting lower levels.

Supply at 1.3622/1.3467 has represented an area of importance since June 2018 on the daily chart. However, having seen September’s reaction fail to deliver a concrete lower low, together with December’s response unable to capsize support at 1.3176, buyers appear to be gaining the upper hand.

The RSI reveals the value rebounded strongly from support around 47.00 in recent days, though has since corrected ahead of overbought space.

Sterling elbowed sharply higher during US trading Monday, fuelled on UK Prime Minster Boris Johnson’s ‘last ditch’ attempt to secure a Brexit deal. This, following an earlier test ahead of 1.3182 support, led GBP/USD to supply at 1.3532/1.3471.

Above the aforesaid supply, bullish eyes are likely to take aim at 1.3607 resistance.

Following a wild start to what is normally a quiet week heading into Christmas, GBP/USD settled 0.5 percent higher.

Monthly trendline resistance remains in the fight, though daily supply at 1.3622/1.3467 currently on shaky ground suggests price may visit daily resistance at 1.3755.

H1 buyers watching the current bullish flag are likely to tread cautiously, having noted H4 supply making a show at 1.3532/1.3471. Price consuming 1.35 might add conviction to an intraday push higher, with 1.3550 in view as a potential primary target. 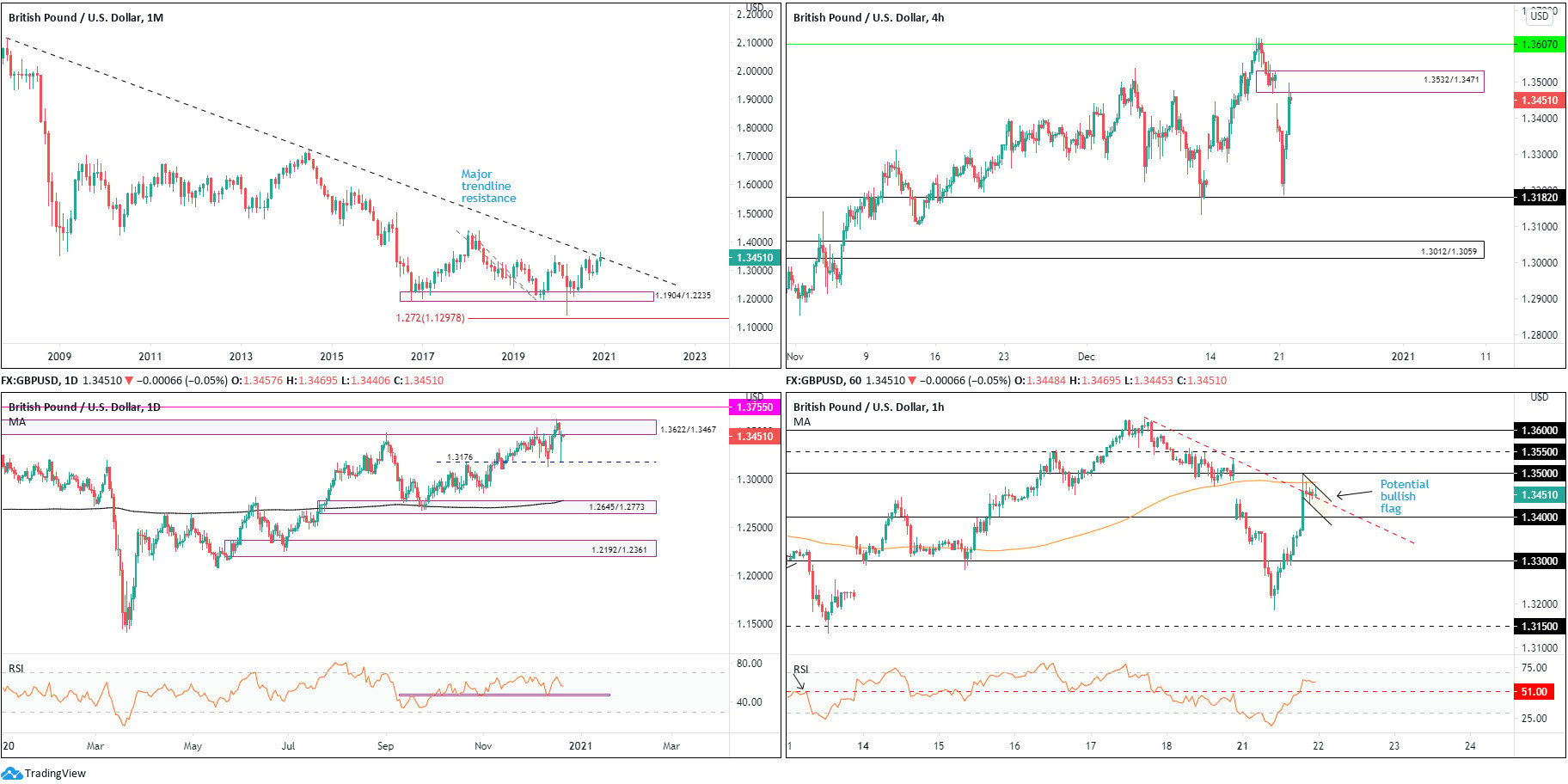