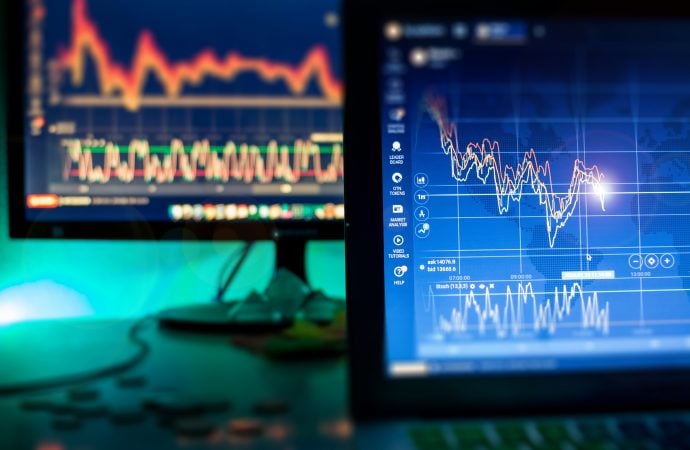 After squeezing through the upper perimeter of an early descending wedge pattern (correction) between 1.2011 and 1.1612 (some may interpret this arrangement as a descending triangle pattern), sellers stepped forward from within supply at 1.2012/1.1937 Monday (active since May 2018).

EUR/USD trading northbound since early 2020, together with monthly price showing promise to the upside, signals buyers still have the upper hand. Therefore, could a retest of the descending wedge pattern be enough to tempt continuation buying?

RSI fans will note the value remains comfortably above 50.00, and on track to cross paths with overbought space.

With the DXY, or US dollar index, retrieving earlier losses off year-to-date lows, this sparked a EUR/USD corrective slide from the widely watched 1.20 level on Monday (housed inside H4 supply at 1.2026/1.1992). Traders will also note the RSI faded overbought resistance at 81.50 by way of an ABCD pattern.

The monthly chart shows scope to climb, following the breach of supply at 1.1857/1.1352. This also communicates a bullish position behind the daily descending wedge breach last week. Daily supply at 1.2012/1.1937, therefore, is potentially in a vulnerable setting. 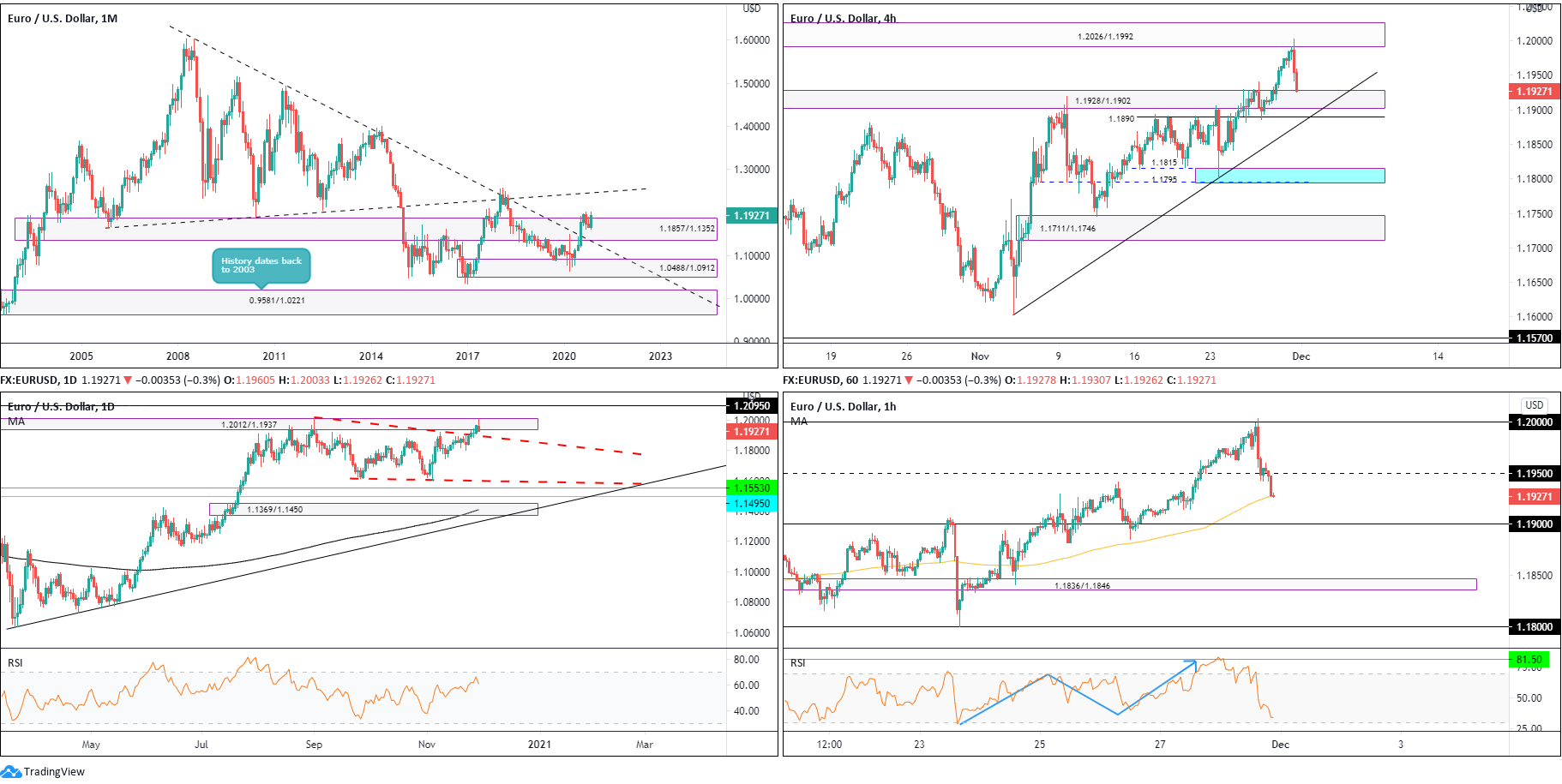 Following a mild correction that addressed the upper border of demand at 0.7029/0.6664 (prior supply), buyers have so far responded well. Up by 4.5 percent in November, buyers appear to be free to explore as far north as 0.8303/0.8082 in the coming months, a supply zone aligning closely with trendline resistance (prior support – 0.4776).

The trend on this timeframe has remained to the upside since March 2020, in spite of the lengthy correction since September. Therefore, Monday’s selling out of 0.7453/0.7384 (by way of a bearish engulfing candle) may be short-lived.

Last week had H4 take over the upper boundary of an ascending triangle, made up between resistance at 0.7340 and trendline support from 0.7221.

Monday’s retracement, as you can see, has carried price action back to retest 0.7340, gifting traders a chance to potentially buy this market. Those initially long the 0.7340 breakout have likely tied up stops beneath the pattern’s associated trendline support (0.7221)

Following the formation of an RSI double-top pattern off overbought levels, intraday price activity submerged the 100-period simple moving average and eventually dethroned 0.7350 support. This leaves sellers with double-bottom support around 0.7325 (yellow) to contend with and the 0.73 level.

RSI traders may also acknowledge that the value is seen moderately rotating higher ahead of oversold terrain.

Monthly price flexing its financial muscle off demand at 0.7029/0.6664, along with daily price trending higher, places a question mark on yesterday’s daily bearish outside day reversal.

Feeding off the bearish rotation from the 100-period simple moving average, H1 established a dragonfly doji candlestick pattern off the 104 handle and rallied into US trading. Taking out the SMA, traders were greeted with a 61.8% Fib level at 104.40, joined closely (yellow) by a 127.2% Fib projection level at 104.49 and the 105.50 resistance.

Monthly price appears to be on the verge of breaching descending triangle support at 104.62, emphasising a weak market. Though this is somewhat offset by Monday’s bullish engulfing candle formed on the daily timeframe. 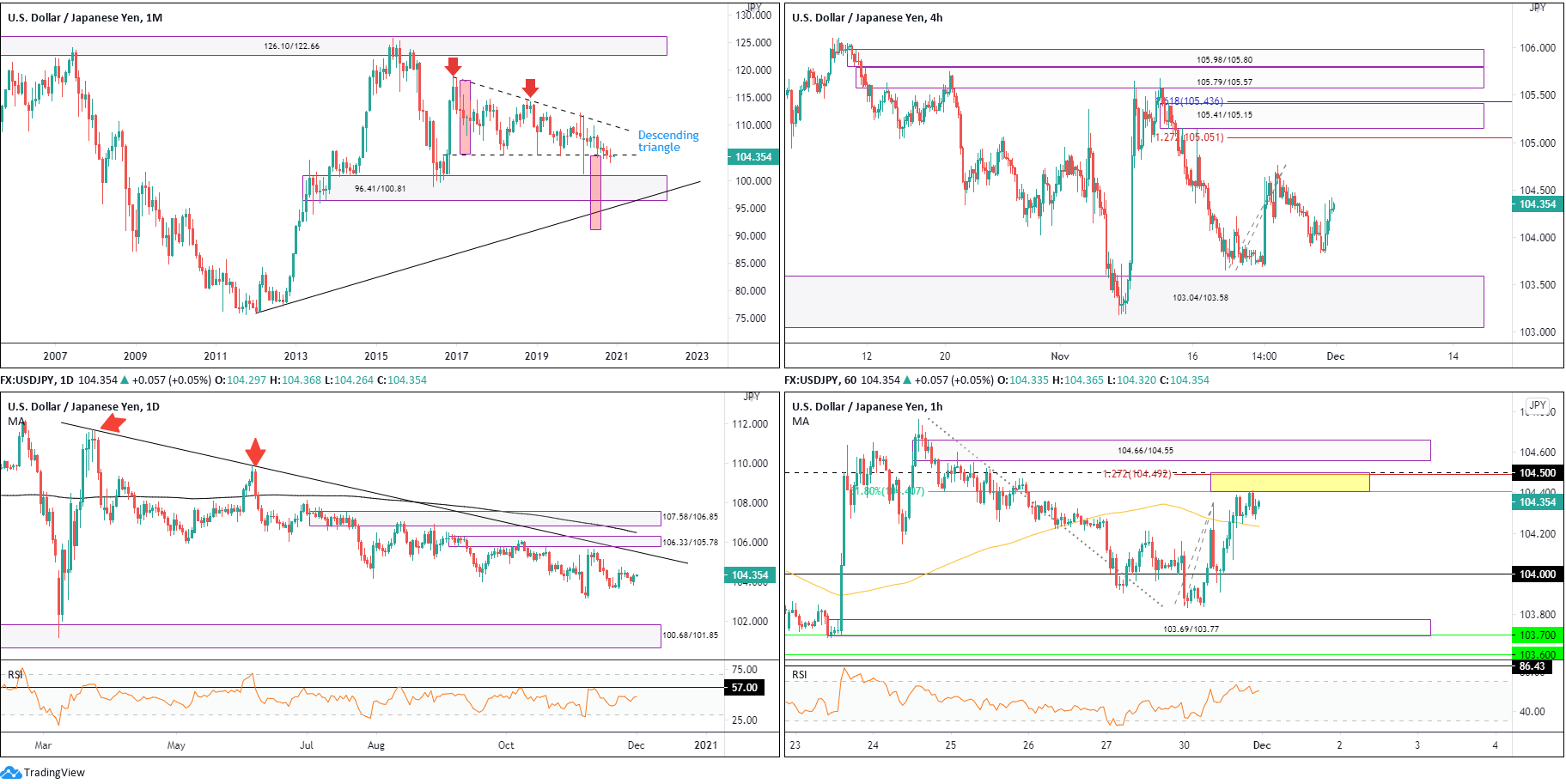 November traded higher by 2.9 percent and seated trendline resistance (2.1161) in the line of fire on the monthly chart.

Supply at 1.3397/1.3383 (located just beneath 1.34 resistance) made a show heading into US trading on Monday, forcing H1 flow beneath the 100-period simple moving average to within close range of the 1.33 level.

Beneath 1.33, the lack of obvious support suggests 1.32 could make an entrance.

Daily price greeting AB=CD resistance at 1.3392 is interesting. This may be sufficient to guide H4 beneath ascending wedge support (1.3105) and target 1.3182 support.

1.33 support on the H1, therefore, appears vulnerable. Not only are daily and H4 sellers possibly changing gear, room for sellers to stretch their legs south of 1.33 is possibly there to 1.32.