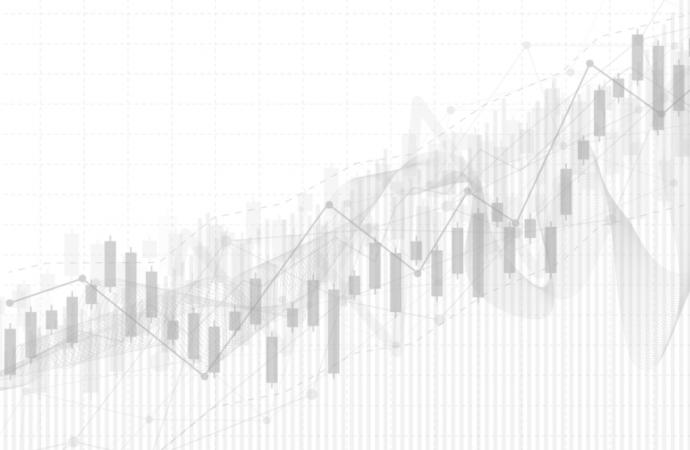 Following the break of long-term trendline resistance (1.6038) in July, and subsequent break of supply from 1.1857/1.1352 in August, a modest correction surfaced. However, buyers making an entrance in November and December trading higher by 2.9 percent argues additional upside may be on the horizon, with ascending resistance (prior support – 1.1641) perhaps targeted.

In recent movement, EUR/USD also processed a bullish flag pattern (1.2177/1.2078) off 1.2095, a level now serving as support. As you can see, the pair modestly closed above the bullish flag’s upper side earlier in the week and has since climbed, suggesting not only could price reach for the descending wedge pattern’s take-profit target at 1.2318 (yellow), but also the bullish flag’s take-profit level at 1.2384 (purple).

The trend on this timeframe has firmly pointed north since March.

As buyers continue to take charge, Thursday observed a fourth successive daily advance grace the charts. Clearing offers around supply at 1.2200/1.2170, extended from April, 2018, and a subsequent breach of resistance at 1.2255, upside shines light on supply from 1.2351/1.2333.

Traders are recommended to factor in a possible 1.2255 retest before buyers look to refresh multi-year highs.

Heading into Thursday’s London session, upside momentum visibly diminished. With the exception of the RSI value crossing paths with the upper side of a week-long range, resistance is limited on the chart until the 1.23 level.

According to the higher timeframes and the prevailing uptrend (daily chart), buyers remain at the wheel.

In addition to the higher timeframe outlook, H4 journeying above resistance at 1.2255 supports a bullish presence. Against this background, a 1.2250 retest on the H1 could charm intraday buyers today, with 1.23 initially targeted.

Following a mild correction that addressed the upper border of demand at 0.7029/0.6664 (prior supply), buyers have so far responded well. Up by 4.5 percent in November, with December also trading higher by 3.9 percent, buyers appear free to explore as far north as 0.8303/0.8082 in the coming months, a supply zone aligning closely with trendline resistance (prior support – 0.4776).

The RSI indicator is seen crowding overbought space, visiting resistance around 80.19, a level in play since 2003.

Following Wednesday’s 100-period simple moving average test, the upper side of the H1 range was taken at 0.7572 early Thursday, followed by a subsequent break of 0.76. Volatility, however, diminished heading into US trading, with 0.7650 resistance overhead.

RSI fans will note the line recently broke above the upper edge of a bullish flag and tested overbought resistance around 80.85. 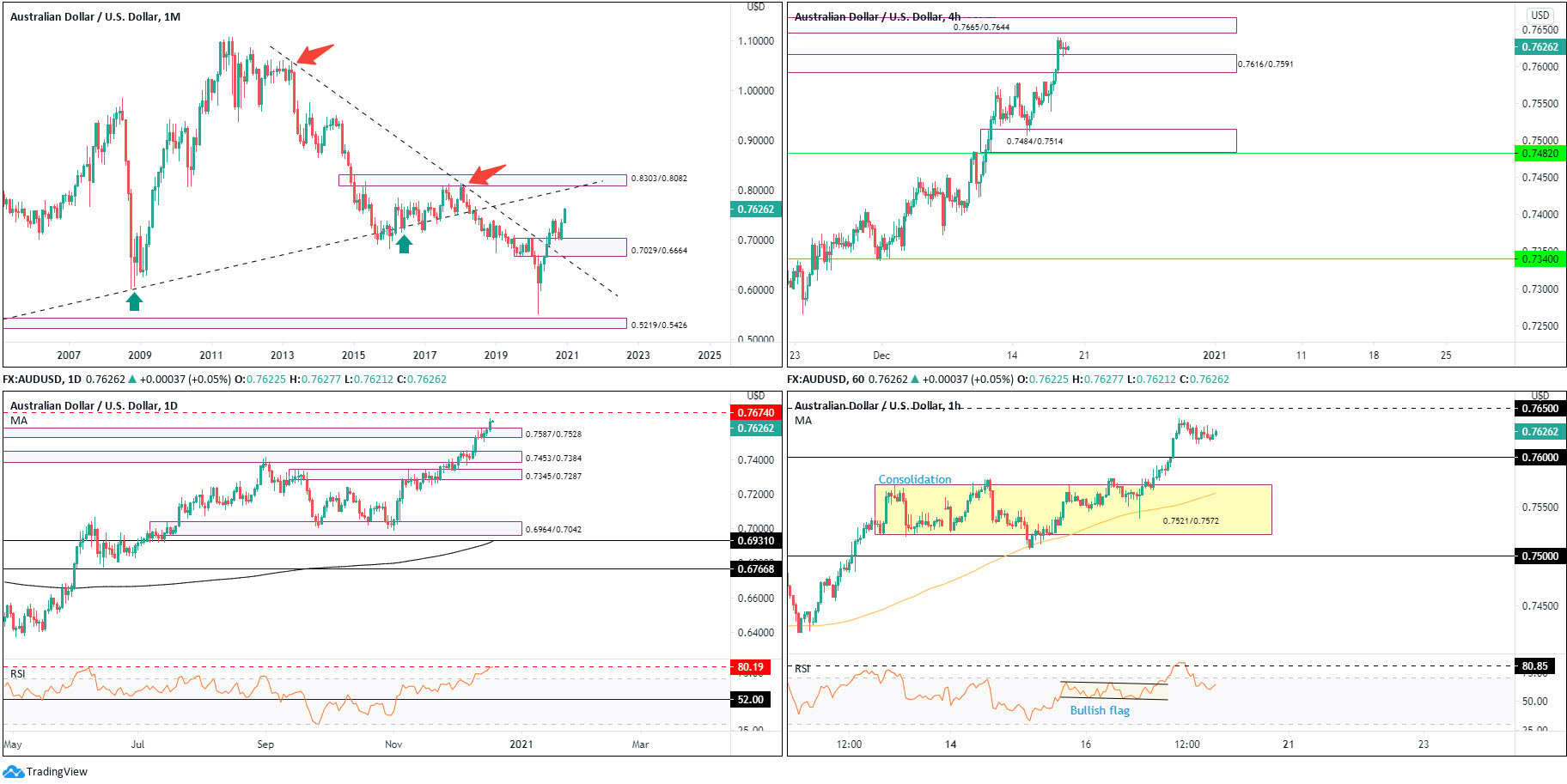 December, as you can see, currently trades lower by 1.1 percent, pursuing lower terrain beneath 104.62.

Since December, sellers have largely governed control with yesterday’s 0.4 percent decline drawing in support at 103.08.

RSI enthusiasts will note the pair has remained under 57.00 resistance since July, on course to visit oversold levels.

With reference to the RSI indicator, the value recently rebounded from oversold space and is on track to greet resistance at 51.10.

Monthly price pursuing a bearish theme below descending triangle support at 104.62 places a question mark on daily support at 103.08. A daily close below the aforementioned level unlocks the possibility of an intraday bearish scene unfolding below 103 (and the lower side of H4 demand at 103.04) towards 102.50 support on the H1 (the upper side of H4 demand resides at 102.63). 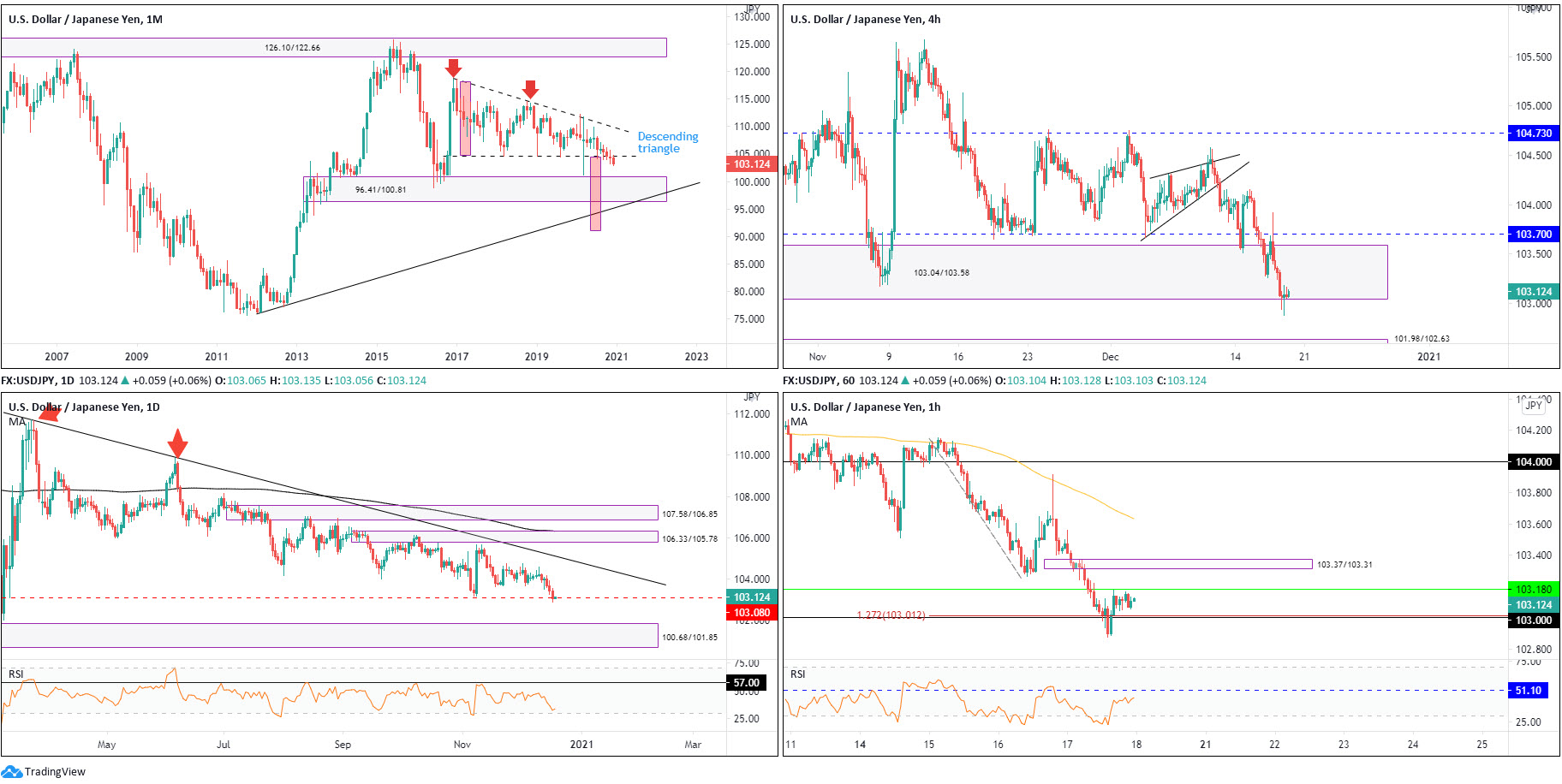 Following last Friday’s rebound from support at 1.3176, this week has witnessed buyers gnaw through offers within supply at 1.3622/1.3467, with Thursday noting a third successive daily advance. Although monthly price tests meaty trendline resistance, the fact daily sellers were unable to topple 1.3176 support suggests a break of the monthly trendline could be on the table.

The RSI reveals the value rebounded strongly from support around 47.00 in recent days and is now on course to retest overbought space.

Resistance at 1.3607 made an entrance Thursday, following a recent run off demand at 1.3435/1.3469, As stated in previous analysis, the reaction from the aforesaid demand is unsurprising, due to it being within this area a decision was made to push above prior YTD peaks.

Although sterling refreshed year-to-date highs on Thursday, an intraday bearish vibe is emanating from the H1 chart. A double pattern around 1.3625 is brewing, with price seen attacking the neckline (blue arrow – 1.3560) as we write. Dipping under 1.3550 support reveals the 1.35 level and an interesting trendline support (1.3134), in addition to demand at 1.3446/1.3470. Traders will also note the 1.35 area merges closely with the double-top take-profit level.

H1 trendline support is likely on the watchlists of many dip-buyers this morning, particularly at the point it aligns with 1.35.

According to the overall technical framework, upside remains favoured, as monthly trendline resistance appears to be losing its grip, daily supply at 1.3622/1.3467 had its upper side tapped yesterday, and the trend in this market (see daily timeframe for clearer view) has been higher since March. The concern 1.35 buyers may have is the fact H4 connected with resistance at 1.3607.