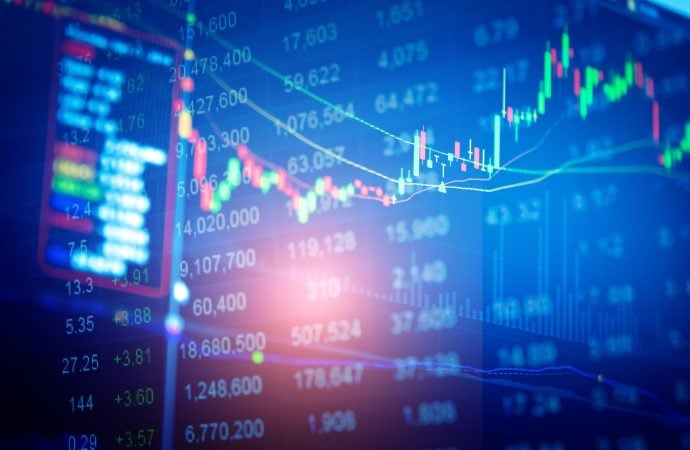 Following the break of long-term trendline resistance (1.6038) in July, and subsequent break of supply from 1.1857/1.1352 in August, a modest correction surfaced. However, buyers making an entrance in November and December trading higher by 2.2 percent argues additional upside may be on the horizon, with ascending resistance (prior support – 1.1641) perhaps targeted.

In recent movement, EUR/USD also processed a bullish flag pattern (1.2177/1.2078) off 1.2095, a level now serving as support. As you can see, the pair modestly closed above the bullish flag’s upper side earlier in the week, suggesting not only could price reach for the descending wedge pattern’s take-profit target at 1.2318 (yellow), but also the bullish flag’s take-profit level at 1.2384 (purple).

Another feature worth underlining on this chart is the ascending wedge formed between 1.2147/1.2059. A breakout lower from here may draw in trendline support (1.1602).

RSI enthusiasts will see the value has been entrenched within a range between 70.00 and the 43.50 area.

According to the higher timeframes and the prevailing uptrend, any bearish setups are likely to struggle. Therefore, H1 supply at 1.2206/1.2187 could fold today, as could the H4 ascending wedge and H4 supply from 1.2200/1.2170.

H1 closing above 1.22 may be interpreted as a bullish signal, with H4 resistance at 1.2255 targeted.

Following a mild correction that addressed the upper border of demand at 0.7029/0.6664 (prior supply), buyers have so far responded well. Up by 4.5 percent in November, with December also trading higher by 3.2 percent, buyers appear free to explore as far north as 0.8303/0.8082 in the coming months, a supply zone aligning closely with trendline resistance (prior support – 0.4776).

Supply at 0.7587/0.7528, as you can see, is on the verge of succumbing to upside pressure, a move that would shine light on 0.7674 resistance. With reference to the immediate trend, AUD/USD has been higher since bottoming in March.

Sellers making a show out of current supply, on the other hand, focuses attention back to 0.7453/0.7384 demand (prior supply).

The RSI indicator is seen crowding overbought space, on track to visit resistance around 80.19.

H1, as you can see, spent Wednesday circling the upper side of the current range between 0.7521/0.7572, recording fresh year-to-date highs off dynamic support at 0.7545 (the 100-period simple moving average).

With sellers clearly thin right now, follow-through moves to the 0.76 level could be just around the corner. On top of this, RSI fans will note the line formed a bullish flag, with the indicator trawling the upper side of the pattern, as we write.

November, as you can see, worked with the lower edge of the aforesaid pattern and finished the month down by 0.3 percent – a third successive monthly loss. December, however, currently trades lower by 0.8 percent.

Since kicking off December, sellers have largely governed control with yesterday’s 0.2 percent decline throwing light on support at 103.08.

RSI enthusiasts will note the pair has remained under 57.00 resistance since July, currently on course to visit oversold levels.

103.70 support offered little fight on Wednesday, and was eventually retested as resistance. Pressuring buyers within demand at 103.04/103.58, this could elbow sellers towards daily support at 103.08 (located within the lower edge of H4 demand).

Yesterday’s low at 103.26, together with 103.18 support offer reasonable downside targets.

Monthly price on the verge of breaching descending triangle support at 104.62 continues to underline a relatively weak market. This is further confirmed on the daily chart until support at 103.08, along with the H1 chart also displaying scope to reach for support around 103.18.

Following Friday’s rebound from support at 1.3176, this week has buyers chewing through offers within supply at 1.3622/1.3467. Although monthly price tests meaty trendline resistance, the fact daily sellers were unable to topple 1.3176 suggests a break of the monthly trendline could be on the table.

The RSI reveals the value rebounded strongly from support around 47.00, on course to perhaps retest overbought space.

Demand at 1.3435/1.3469 recently made an entrance as the pair faded year-to-date highs on Wednesday. The reaction from the aforesaid demand is unsurprising, due to it being within this area a decision was made to push above prior YTD peaks. Holding this area throws light on resistance at 1.3607; 1.3435/1.3469 giving way, however, leads to a possible test of demand at 1.3325/1.3281 (prior supply).

Interestingly, RSI action also bounced just ahead of support at 51.00.

In light of the above, the charts suggest buyers have the upper hand right now, with a bullish scene potentially forming north of 1.35.