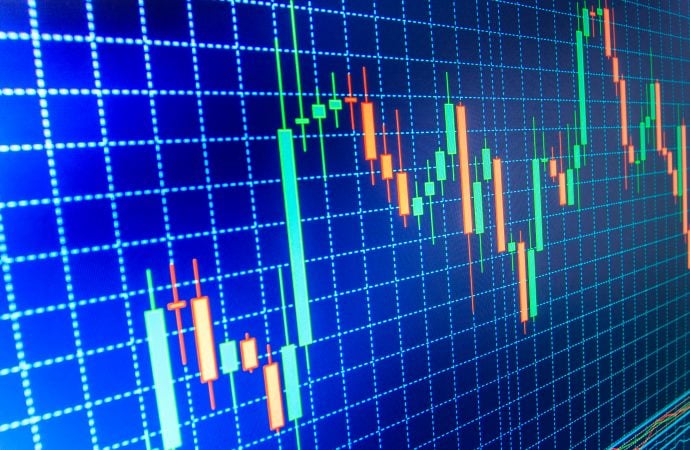 Following the break of long-term trendline resistance (1.6038) in July, and subsequent break of supply from 1.1857/1.1352 in August, a modest correction surfaced. However, buyers making an entrance in November and December trading higher by 1.9 percent argues additional upside may be on the horizon, with ascending resistance (prior support – 1.1641) perhaps targeted.

Puncturing the recently tested supply communicates an early cue the pair may head for the daily descending wedge pattern’s take-profit target at 1.2318.

Pattern traders will note H1 recently chiselled out an ascending wedge (1.2147/1.2059), with the lower side having been under pressure since Friday.

In the event the lower side of the wedge caves in, the 100-period simple moving average around 1.2121 and the 1.21 level demand attention.

Technically we have a somewhat mixed market. Monthly and daily timeframes signal higher prices could be on the menu, while H4 recently crossed paths with supply at 1.2200/1.2170 and the H1 formed an ascending wedge pattern (a reversal signal).

The fact this market has been trending higher since the beginning of 2020, and the higher timeframes tend to take precedence over the lower timeframes, H4 supply and the ascending wedge formation on the H1 may struggle to attract selling.

Following a mild correction that addressed the upper border of demand at 0.7029/0.6664 (prior supply), buyers have so far responded well. Up by 4.5 percent in November, with December also trading higher by 2.6 percent, buyers appear free to explore as far north as 0.8303/0.8082 in the coming months, a supply zone aligning closely with trendline resistance (prior support – 0.4776).

Momentum has noticeably slowed since Friday, following Thursday’s dominant showing through resistance at 0.7482, a move that led to fresh 30-month highs forming.

RSI enthusiasts may also acknowledge the line recently made contact with support at 41.20, a level tied together with channel support.

Should daily sellers take hold, this may direct H4 beyond support at 0.7482 to the 0.7450 support on the H1, which unites with the upper side of daily demand at 0.7453. Monthly buyers taking hold, on the other hand, could see range traders fade the H1 range low at 0.7521 today, though do take into account a whipsaw into 0.75 bids and the 100-period simple moving average could also develop.

Since November 20, price movement on the daily chart has offered a low-key stance. We did see a hammer candle pattern form yesterday, though given the lack of support this is unlikely to attract buyers.

Overall, though, the pair remains rangebound between the 103.70 support and resistance at 104.73.

The lack of sell-side liquidity off support at 103.60 Monday allowed USD/JPY to reclaim 104. H1 currently retesting 104 may see additional bullish flow materialise towards supply from 104.28/104.21, conveniently positioned above tops around 104.15 (a location buy-stops are likely to be placed above).

In terms of RSI action, the value elbowed above 51.10 resistance and is on course to retest the line.

Monthly price appearing to be on the verge of breaching descending triangle support at 104.62 continues to underline a relatively weak market. This throws light on H1 supply at 104.28/104.21 as a potential location sellers may be attracted to.

Dethroning the aforesaid H1 supply, nonetheless, sparks a possible bullish scene to at least 104.50 resistance, pinned just beneath the upper side of the H4 range at 104.73. 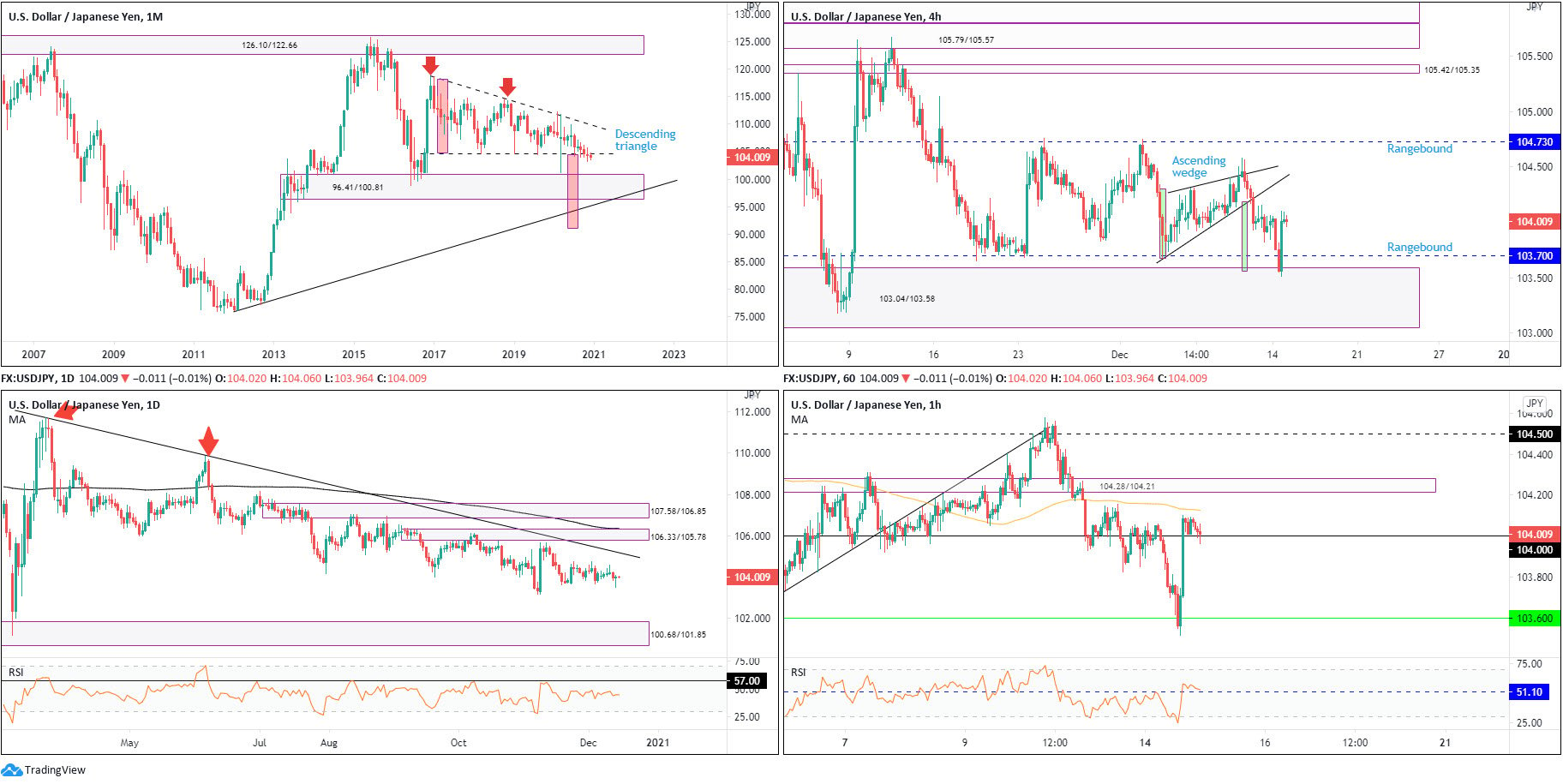 With monthly trendline resistance making an entrance and daily supply also recently joining the fight at 1.3622/1.3467, sellers have since taken the lead, possibly eyeing 1.2645/1.2773.

The RSI, however, reveals the value rebounding from support around 47.00.

H1, as you can see, is clinging to the lower side of the 100-period simple moving average around 1.3330, with 1.33 support also lingering close by.

RSI traders will observe the value testing the underside of 51.00, a support/resistance level since early December.

Monthly price flirting with trendline resistance, as well as sellers showing interest from daily supply at 1.3622/1.3467, communicates a bearish vibe back towards daily demand at 1.2645/1.2773.

H4 demand at 1.3325/1.3281 is in play, potentially aided by 1.33 support on the H1. However, knowing where we’re positioned on the higher timeframes suggests 1.33 (and H4 demand) is unlikely to attract buyers, highlighting a potential bearish theme south of the level towards the 1.32 neighbourhood. 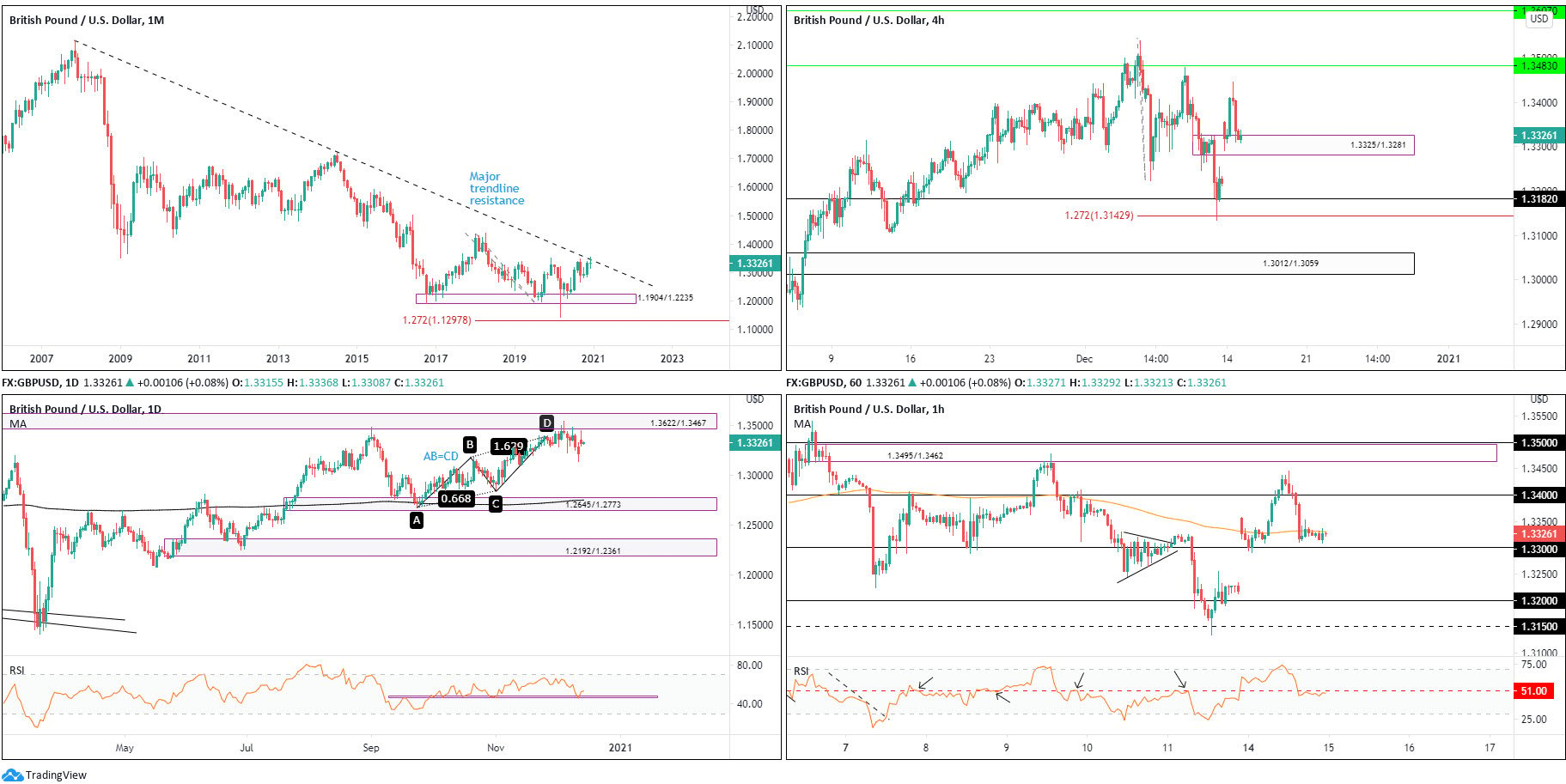