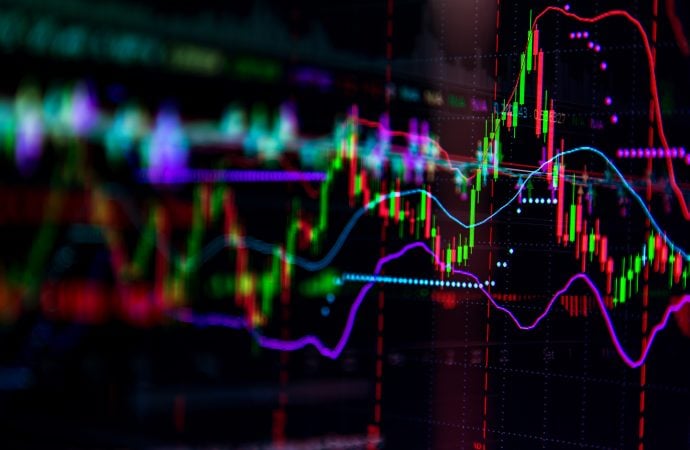 Following the break of long-term trendline resistance (1.6038) in July, and subsequent break of supply from 1.1857/1.1352 in August, a modest correction surfaced. However, with buyers making an entrance in November and December trading higher by 1.3 percent, this argues additional upside may be on the horizon, with ascending resistance (prior support – 1.1641) perhaps targeted.

Since the week kicked off, however, thin bids have allowed price to gradually grind lower. Wednesday, off best levels, is currently seen attempting to topple 1.2095 support in the shape of a bullish flag pattern (1.2177/1.2078)

RSI action shows the value recently exited overbought space, down from peaks at 75.00.

Could the above be enough to drive buying and force a breakout above the daily bullish flag? Failure to hold at the aforesaid H4 demand throws light on demand at 1.2026/1.1992 and trendline support (1.1602).

Following a mild correction that addressed the upper border of demand at 0.7029/0.6664 (prior supply), buyers have so far responded well. Up by 4.5 percent in November, with December also trading higher by 1.3 percent, buyers appear free to explore as far north as 0.8303/0.8082 in the coming months, a supply zone aligning closely with trendline resistance (prior support – 0.4776).

Supply at 0.7453/0.7384 remains under attack, as Wednesday delivered a heavy-handed blow to its upper side and renewed year-to-date highs.

Despite Tuesday’s characterless movement within the parapets of demand at 0.7398/0.7420, robust buying made a show Wednesday and struck highs at 0.7485, consequently taking in the ascending triangle take-profit target (pink) at 0.7463.

As you can see, though, a retreat formed and stopped a few pips ahead of the aforementioned demand zone and established a dragonfly doji candlestick pattern.

Wednesday’s correction off year-to-date highs dropped the pair through 0.7450 support to test the mettle of the 100-period simple moving average around 0.7430.

From a technical stance, retaking the 0.7450 level today sends a bullish signal to this market.

As for the RSI indicator, the value recently generated bullish hidden divergence.

Monthly price calling for higher levels, and daily supply from 0.7453/0.7384 having its upper side tested yesterday, suggests 0.7450 offers could be thin. With that, a push above the latter could emerge. 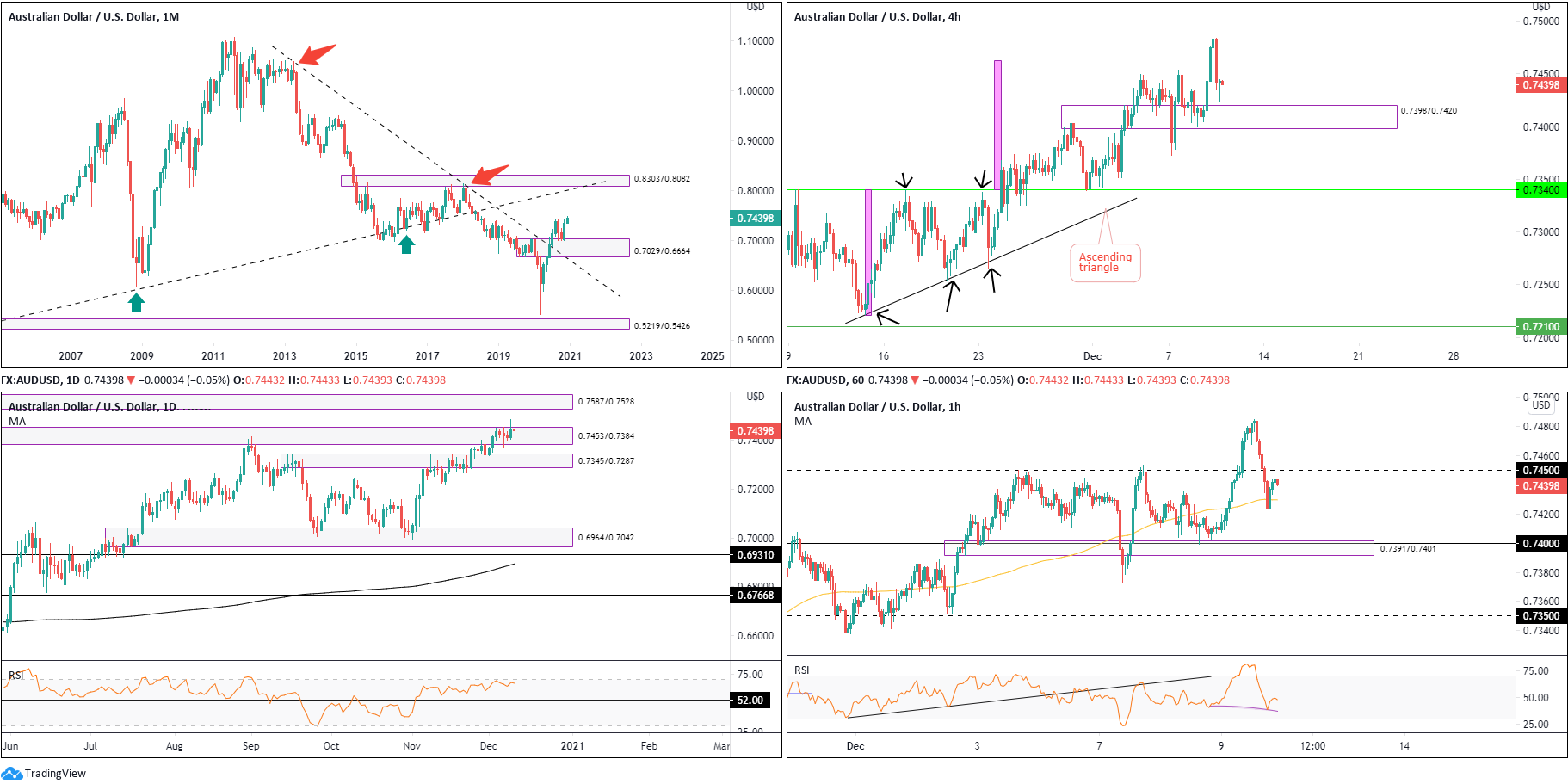 An additional feature worth considering is the ascending wedge pattern (103.67/104.31).

USD/JPY flow on Wednesday, following an earlier retest at the 100-period simple moving average around 104.06, greeted the 61.8% Fib level at 104.34 and trendline resistance (prior support – 103.67). Further interest to lower levels today shines light back on the simple moving average, with subsequent weakness to possibly fill 104 bids.

The above implies H4 sellers may attempt to overrun any defence around the lower side of the H4 ascending wedge pattern, implying a possible breach of 104 could be in the offing.

With monthly trendline resistance making an entrance and daily supply also recently joining the fight at 1.3622/1.3467 (together with Wednesday forming a shooting star candle pattern), sellers may eventually take the lead.

Governed largely on the back of Brexit headlines yesterday, GBP/USD rushed resistance at 1.3396 and topped just ahead of another resistance from 1.3483, before collapsing back beneath 1.3396.

The supply from 1.3495/1.3462 and joining AB=CD pullback proved effective resistance heading into Wednesday’s US session. Following the formation of a shooting star candle configuration out of the aforesaid supply, sellers made a strong showing, retaking 1.34 (and the 100-period simple moving average) and retesting the lower side of the figure before spiking to lows ahead of 1.33. Demand is seen below at 1.3249/1.3274.

Monthly price flirting with trendline resistance, as well as daily supply stepping forward at 1.3622/1.3467, communicates a bearish vibe. Although the immediate trend faces higher on the daily timeframe, the bearish structure (on both daily and monthly charts) and monthly downtrend suggests sellers still have the advantage.

Consequent to the above, a bearish extension off the lower edge of 1.34 would not surprise today.

Another scenario to be watchful of is a whipsaw through the 1.33 level into demand at 1.3249/1.3274. However, any upside derived from this move is unlikely to be anything to write home about due to the pair’s stance on the higher timeframes.