August 26th 2020: Dollar Offered Towards 93.00 as Month-End Currents Crawl into the Narrative 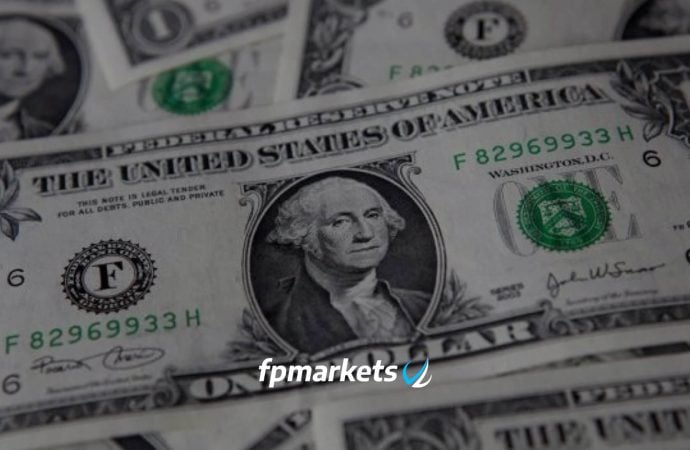 This argues a move to the upside may be on the horizon, with trendline resistance (prior support – 1.1641) on the radar as the next target. Also worth noting, though, is the primary downtrend (since July 2008) remains intact until 1.2555 is engulfed (Feb 1 high [2018]).

August, as you can see, has been relatively lacklustre, currently up by only 0.5 percent.

Efforts to extend July’s advance have so far been contained within a rising channel pattern (1.1695/1.1909), in addition to supply at 1.2012/1.1937 also recently making an entrance, extended from May 2018. Trendline support (1.0774) is likely to welcome price movement should a break lower come to pass, while immersing the aforesaid supply favours moves to resistance at 1.2095.

The RSI indicator, since the beginning of August, has drifted lower and exited overbought space, currently circling the 60.00 neighbourhood.

Price recently came into contact with supply at 1.1828/1.1868, delivering a reasonably solid bearish candle on Monday. Evidently, this was not enough to tempt follow-through selling, therefore price action is, once again, exploring the lower edge of the aforesaid supply area.

An extension to the upside, moves that topple current supply, tips price for more outperformance to another supply coming in from 1.1953/1.1929.

An early 1.18 retest amid European trade Tuesday observed the 100-period simple moving average come under fire. Although proving a reasonably formidable intraday resistance, recent trading closed above the dynamic value and shifted attention to 1.1850 resistance, with a break potentially pressuring things to channel resistance (1.1849), a base that intersects with an area of stacked supply between 1.1896/1.1910 and 1.1894/1.1876. Traders will note the upper base houses 1.19.

In terms of where we stand with the RSI indicator, the value is currently loitering around 60.00, threatening a possible move to overbought status.

All in all, this market echoes a mild bullish tone at the moment, which could lead to +1.1850 moves today.

Since mid-June, the pair has been compressing north between two converging trendlines (0.6832/0.7064), in what appears to be a rising wedge.

Price, as you can see, recently tumbled just ahead of supply at 0.7346/0.7282, leading to a test of the rising wedge base, which has so far held firm.

A break below the aforesaid rising wedge may have dips find initial support around the 0.7067 region.

Trendline support (0.7076) continues to maintain its position on the H4 timeframe. Yesterday’s upward lift from the aforesaid barrier appears to be tipped for additional gains to resistance at 0.7237. Should the resistance contain upside, this could be the early stages of a right shoulder from a head and shoulder’s top formation (0.7241/0.7275).

Monthly price is attempting to secure ground north of supply at 0.7029/0.6664, while daily candles are in the process of forming a rising wedge pattern, a potential reversal formation.

H4 trendline support (0.7076), an ascending line that is now seen slicing through the middle of the current H1 range, remains prominent. The recent H1 trendline resistance break, on top of where the H4 trendline support is now located, as well as room seen to move higher on both the monthly and daily timeframes, forecasts a 0.72 break today, targeting H1 supply at 0.7236/0.7222. 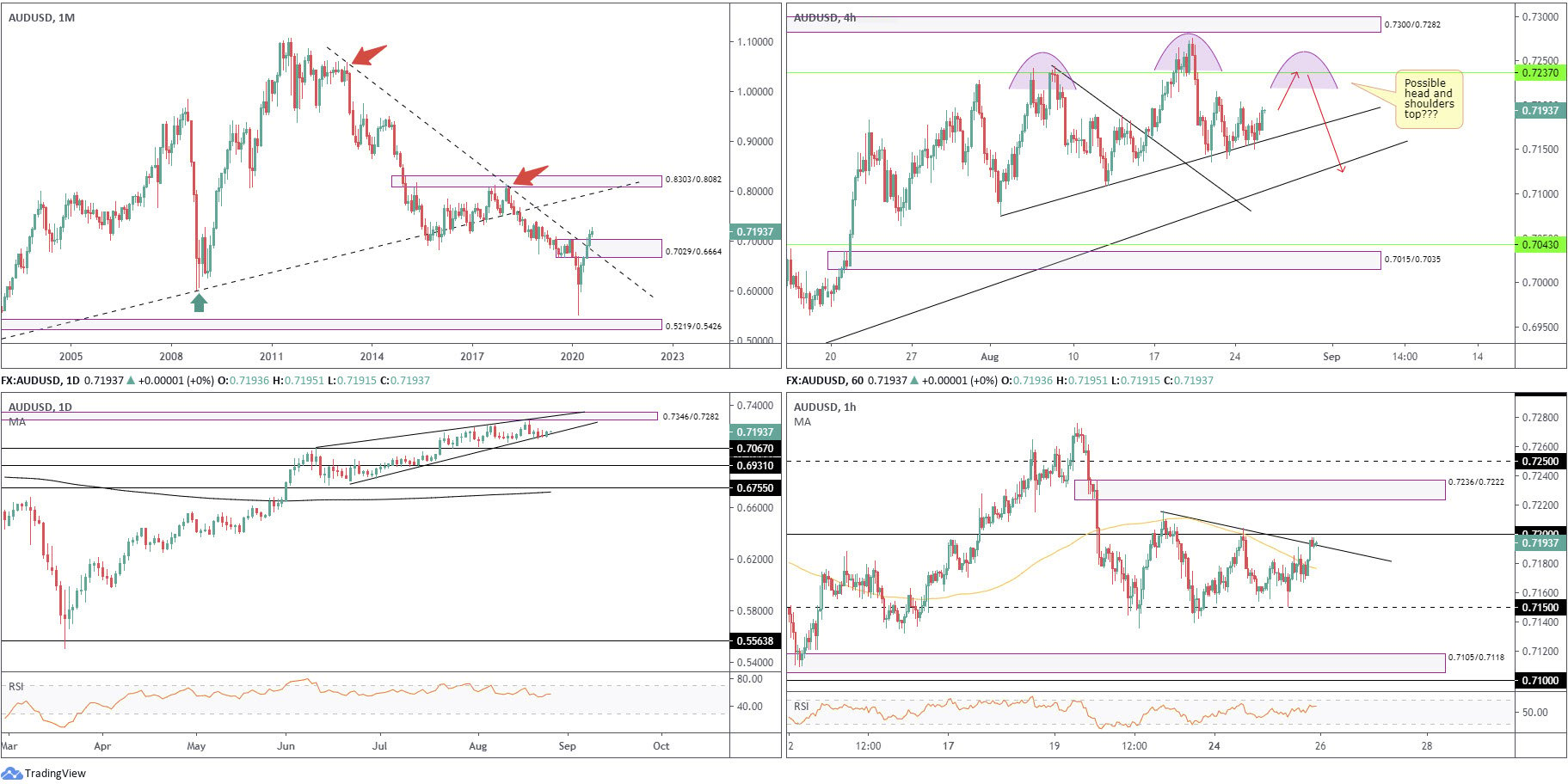 April, May and June were pretty uneventful, with the latter wrapping up indecisively in the shape of a neutral doji candlestick pattern. July, nonetheless, sunk nearly 2 percent, testing the lower boundary of the descending triangle, while August currently trades higher by 0.50 percent.

Since early last week, buyers and sellers have been squaring off mid-range between supply from 107.58/106.85 and support at 104.62, taken from the monthly timeframe (descending triangle support).

Thanks to upbeat risk sentiment, demand for the safe-haven Japanese yen diminished yesterday, consequently lifting USD/JPY to within shouting distance of the aforesaid supply. A push north may take on trendline resistance (111.71) and the 200-day simple moving average at 107.99.

As anticipated, supply at 105.92/106.16 (prior demand) was taken on Tuesday, due to last week’s mild breach and relatively non-committal tone from sellers.

106.19 could also re-enter the fight today as support.

With respect to the RSI value, the indicator entered overbought territory yesterday, though exited the region heading into the close.

Intraday, H4 supply at 106.65/106.43 is in the limelight, as is its approach: an ABCD bearish pattern at 106.57. This, of course, may send the pair lower today, yet with monthly coming from support and daily/H1 action showing room to move higher, buyers still appear to have the advantage. 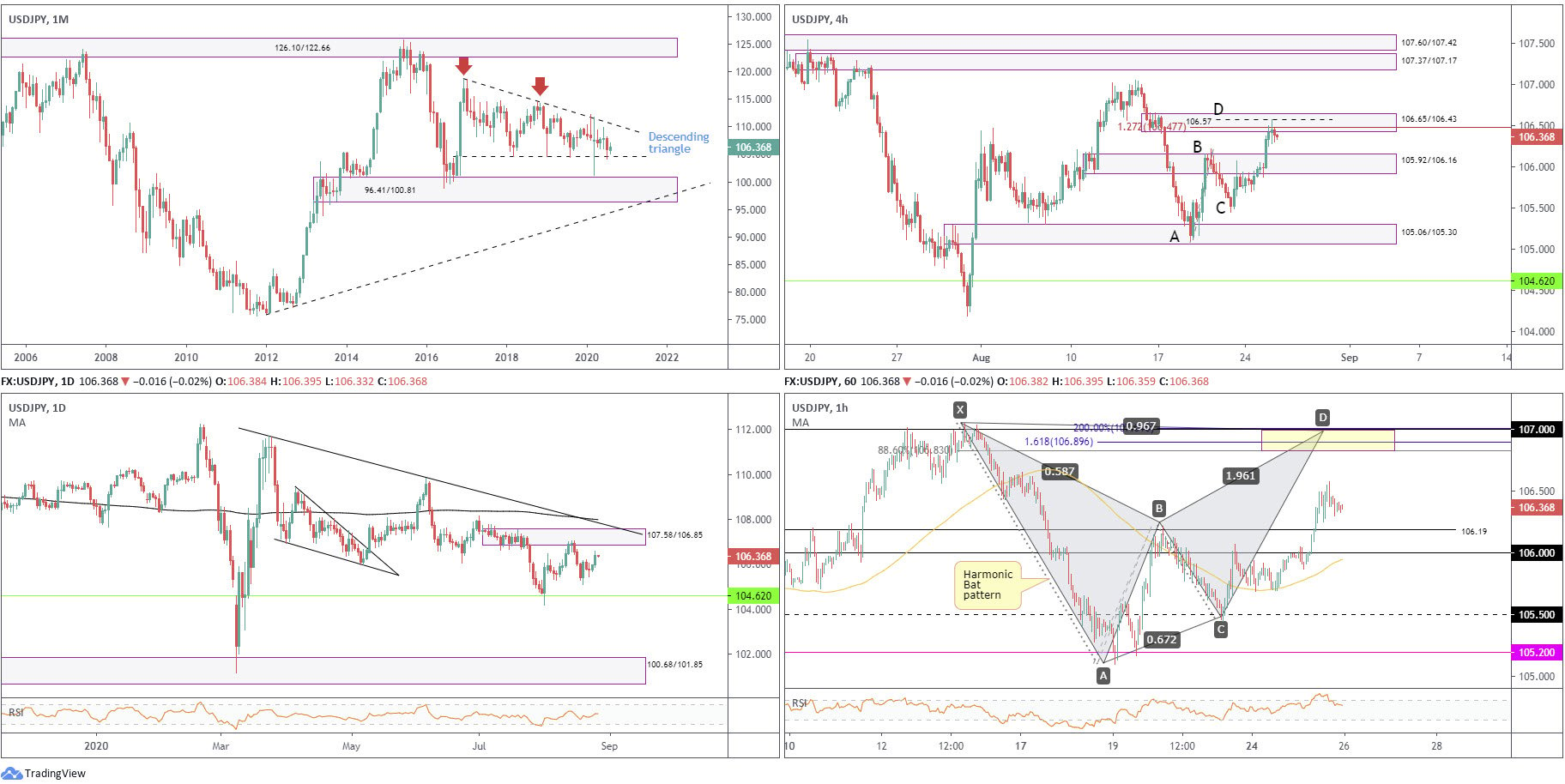 As you can see, buyers and sellers emphasise an indecisive tone right now. On one side, sellers are defending the aforesaid structures, while on the other side of the field buyers appear eager to extend the immediate trend, set in March.

Early US on Tuesday gripped 1.3150 resistance, with downside attempts limited by the 100-period simple moving average. This implies buyers may try for higher levels above 1.3150 today, with 1.32 in line to receive price.

Indicator-based traders will also note the RSI is circling just south of its overbought level.

Though monthly indicates scope to navigate territory north of current price, daily resistance at 1.3201 and the daily 161.8% Fib ext. level at 1.3264 have so far hindered upside attempts.