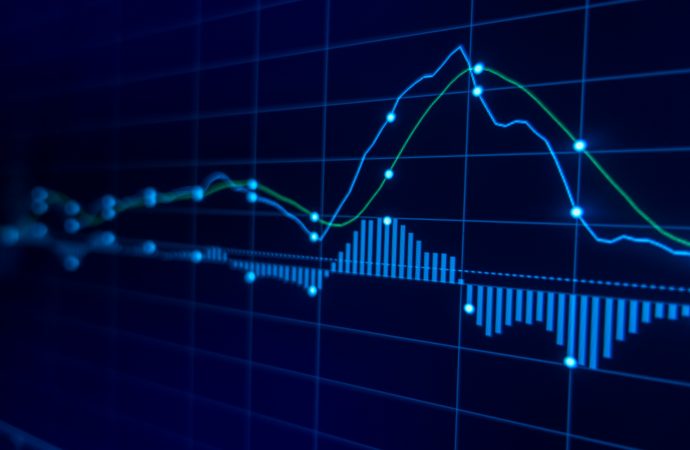 In conjunction with monthly support, Wednesday steadied off the upper edge of a breached falling wedge (between $1.1847 and $1.1975) in the shape of a bullish outside reversal—plotted north of Quasimodo support at $1.1688. Aside from technical forces, the US dollar index (ticker: DXY) retreating on the back of lower US inflation numbers aided the bullish vibe.

Continued pressure to the upside on EUR/USD shines the technical spotlight on the falling wedge pattern take-profit level at $1.1943.

With regards to long-term trend, we have been somewhat directionless since the beginning of the year, despite healthy gains in 2020. From the relative strength index (RSI), the value spun higher ahead of oversold territory in recent trading, which could eventually see the indicator take on trendline resistance, taken from the low 27.11, and resistance at 51.36.

Albeit suffering a breach, Quasimodo support at $1.1720 maintained position on Wednesday and hauled the currency pair to within touching distance of resistance at $1.1763. Air space north of here shifts attention towards resistance at $1.1800.

Violating trendline resistance, drawn from the high $1.1900, and subsequently retesting Quasimodo support from $1.1711 witnessed bulls enter an offensive phase heading into US hours yesterday. As of current price, buyers and sellers are battling for position just south of supply at $1.1766-1.1754, an area accompanied by the 100-period simple moving average.

36.94 holding as support on the relative strength index (RSI) propelled the value through the 50.00 centreline to within close reach of overbought space and neighbouring resistance at 78.97. The aforementioned resistance, therefore, is a level to be mindful of going into Thursday’s session.

Recognising monthly flow testing support at $1.1857-1.1352 and daily price forging a bullish candlestick off the upper edge of a breached falling wedge places a bullish theme in a favourable light.

Month to date, August is up 0.4 percent.

In spite of the Australian dollar launching a one-way move higher against a softer dollar across the board—influenced by lower US inflation data—resistance at $0.7453-0.7384 remains central focus, capping upside since 22nd July.

With respect to trend, 2021 is underwater right now, emphasised by the close below the 200-day simple moving average at the beginning of July. Momentum, as per the relative strength index (RSI), is on the verge of overthrowing resistance at 41.63, a move drawing attention to the 50.00 centreline.

Tuesday confronting the head and shoulder’s profit objective at $0.7328 (the pattern emerged around the lower side of a 38.2% Fib retracement at $0.7408), and whipsawing to Fibonacci structure between $0.7293 and $0.7315, observed a bullish phase materialise on Wednesday.

Quasimodo support at $0.7323 served well, elevating short-term action above the 100-period simple moving average at $0.7356 Wednesday. $0.74 now calls for attention as possible resistance, with supply residing at $0.7450-0.7436 should price overrun the psychological base.

Interestingly, the relative strength index (RSI) exited overbought territory, leaving resistance at 78.26 unchallenged. Dropping from overbought is recognised as a bearish cue by some analysts, which may motivate a bearish scene should $0.74 enter the frame.

Daily resistance at $0.7453-0.7384 is a key watch on the bigger picture, particularly as the monthly timeframe exhibits scope to tunnel lower. This positions the H4 timeframe’s 38.2% Fib retracement value at $0.7408 in the line of fire as feasible resistance, sharing chart space with $0.74 on the H1. Note both levels inhabit the aforementioned daily resistance.

Month to date, August trades 0.7 percent in the green.

Persuaded by US Treasury yields trimming gains—benchmark 10-year note down 2.0 percent—following the US inflation release, USD/JPY wrapped up Wednesday considerably off best levels.

Technically speaking, however, we remain north of local trendline resistance-turned support, forged from the high ¥111.66, movement that could eventually pull in resistance from ¥111.88-111.20 and neighbouring supply at ¥112.68-112.20.

Resistance at 54.00 is under pressure, according to the relative strength index (RSI), showing traders that momentum is directed to the upside and overbought terrain may be on the cards.

Although already welcoming sellers early July, supply at ¥110.99-110.80 was tested to the pip yesterday and offered a bearish platform for sellers to work with.

Relative strength index (RSI) resistance at 78.38—located within overbought—has proved stubborn since mid-June. Yesterday had the value step through the 50.00 centreline and join space just ahead of oversold and support at 18.76.

H1 support at ¥110.38 offers a potential floor for dip-buying scenarios, having seen the base align closely with the 100-period simple moving average. However, the majority of interested traders here will likely pursue additional confirmation before pulling the trigger, given the H4 chart demonstrates room to move to as far south as stacked demand between ¥109.42-109.68 and ¥109.69-109.89.

Since early August, the daily candles have been busy carving out a bullish flag between $1.3983 and $1.3888. Having seen the relative strength index (RSI) modestly defend the 50.00 centreline as support (showing average gains in this market exceed average losses), and Wednesday establish a bullish outside reversal, a push higher could be in the offing. Rupturing the upper edge of the current bullish flag, however, faces resistance at $1.4003. Breaking this base helps validate a bullish existence, targeting Quasimodo resistance at $1.4250.

Fibonacci support between $1.3813 and $1.3826 entered the picture yesterday and served buyers well.

Supply at $1.3933-1.3917 is recognised as the next upside target available on this scale, an important decision point that breached $1.3875ish lows.

Confirmed by the relative strength index (RSI) chalking up bullish divergence within the oversold region (movement showing downside momentum slowing), along with a waning USD, lifted cable higher on Wednesday.

Additional RSI observations show the indicator levelling off a whisker below overbought territory, currently engaging with 60.00.

The daily timeframe’s bullish flag is likely to interest a number of longer-term traders, though many will seek a close above resistance at $1.4003 before committing.