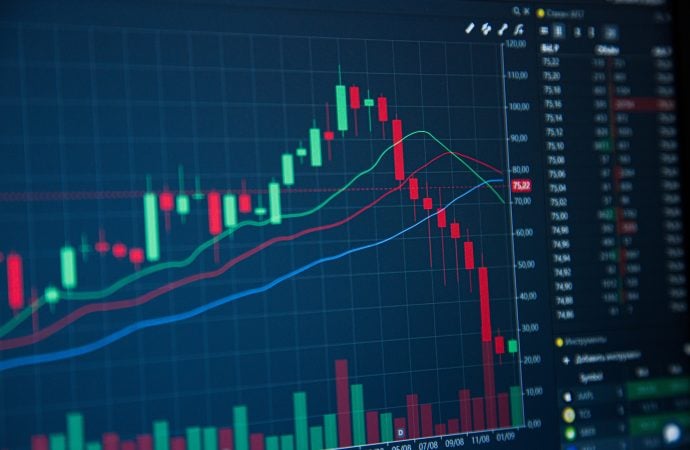 The daily timeframe has buyers and sellers squaring off ahead of a decision point coming in from $1.0788-1.0854, complemented by ascending support, drawn from the $1.0340 3rd January low 2017. This followed successive daily losses, movement sparked by the bearish outside reversal printed south of resistance at $1.1224 on 31st March. Momentum also remains negative on the daily timeframe; the widely watched relative strength index (RSI) continues to navigate beneath the 50.00 centreline (informs market participants that average losses exceed average gains).

In terms of the weekly timeframe’s technical picture, the currency pair is on the doorstep of channel support, extended from the low $1.1186, as well as weekly Quasimodo support at $1.0778. Note that these levels closely share chart space with the daily timeframe’s decision point mentioned above at $1.0788-1.0854.

Trend on the bigger picture continues to echo a downside bias, placing a question mark on weekly and daily supports. Price has reflected bearish status since topping at $1.2350 at the beginning of January (2021). This is strengthened by a trendline support breach on the weekly scale, drawn from the low $1.0636, together with the recent test of weekly resistance following year-to-date lows at $1.0806 in early March.

Reinforcing the bearish perspective is H4 support struggling to entice bullish commitment, shaped by way of a deep 78.6% Fibonacci retracement at $1.0888 and a trendline resistance-turned support, etched from the high $1.1495. The $1.0990-1.0963 decision point resides upstream on the H4, a zone likely to be challenged should buyers regain consciousness. Lower on the curve exposes prime support from $1.0785-1.0820.

H1 Quasimodo support-turned resistance at $1.0931 proved an effective ceiling in recent trading, as $1.09 is ignored (painful for those attempting to fade the level and trade breakouts). ‘Fresh’ H1 support is not seen until a Quasimodo formation at $1.0821; to the left of price, (potential) consumed demand is present between $1.0848 and $1.0890 (8th March).

The Australian dollar remained on the ropes against the US dollar on Thursday, despite a hawkish shift out of the RBA earlier in the week. With many desks citing weakening oil prices as the catalyst behind recent AUD softness, the technical landscape also ‘supports’ additional weakness.

For those who read Thursday’s technical briefing you may recall the following text based on higher timeframes (italics):

Latest technical developments out of the weekly timeframe has price shaking hands with the lower side of prime resistance at $0.7849-0.7599. Candlestick enthusiasts will note the current candle is on track to form a shooting star pattern—a formation echoing a bearish signal.

$0.7849-0.7599 was an area highlighted in previous writing, and for good reason. Take note of recent trend studies:

The trend, according to overall chart studies, suggests that surpassing the noted resistance may be problematic. The monthly timeframe has portrayed a downtrend since August 2011, indicating the pullback (February 2022 to current) on the weekly timeframe might be viewed as a ‘sell-on-rally’ theme and not a ‘dip-buying’ opportunity from within the 2021 advance from pandemic lows of $0.5506 (march 2021).

Price action on the daily timeframe is withdrawing from $0.7660: a daily double-bottom pattern’s ($0.6991) profit objective that dovetails with a 100% Fibonacci projection at $0.7645 (AB=CD harmonic structure). Wider declines in the currency pair shines the technical spotlight on trendline resistance-turned support, extended from the high $0.8007.

In view of the higher timeframes indicating that sellers could have fuel left in the tank, a pullback from $0.75 might be viewed as a sell-on-rally scenario from H1 prime resistance at $0.7509-$0.7527.

Action within the USD/JPY currency space wrapped up Thursday eking out modest gains, pencilling in a fifth consecutive day in the green.

Technically, the market remains entrenched within a dominant uptrend. You might recall the following text from previous analysis:

Along with the daily timeframe holding above its 200-day simple moving average at ¥113.60 since February 2021, the overall longer-term trend has been higher since 2012 (check monthly timeframe). The 21.5 percent correction from June 2015 to June 2016 provided a dip-buying opportunity, as did a subsequent 14.8 percent correction from December 2016 to pandemic lows formed early March 2020. Adding to this, we broke the ¥118.66 December 2016 high in mid-March.

The area between weekly Quasimodo resistance at ¥124.42 and daily resistance at ¥123.72, however, remains a potential headwind. It was aired in recent analysis that the daily timeframe’s relative strength index (RSI) is noteworthy:

While the indicator peaked around 87.52 (a level not seen since 2014), the value has turned higher after dipping a toe under the 70.00 threshold. Exiting overbought space is considered a bearish indication by many technicians. However, in upward facing markets, such as the one we’re in now, false bearish signals are common. If the RSI value does eventually tunnel lower, the 40.00-50.00 area of support may be targeted (served as a ‘temporary oversold’ base since May 2021).

Against the backdrop of higher timeframes, short-term flow has been lacklustre over the past couple of days, toying with the lower side of ¥124 (set beneath H1 Quasimodo resistance at ¥124.20). Nearby, technicians will acknowledge trendline support on the H1 scale, drawn from the low ¥121.28. Probing beneath here highlights ¥123 as a reasonable downside objective.

Recognising higher timeframe resistance (weekly and daily) between ¥124.42 and ¥123.72, a H1 close forming under trendline support on the H1 scale could underpin a bearish setting towards ¥123. In the event of a breakout beyond H1 resistance at ¥124.20-124.00, nonetheless, breakout buyers are urged to pencil in the possibility of a bearish showing from current weekly Quasimodo resistance at.

GBP/USD bulls were unable to find grip on Thursday, weighed by a broadly stronger USD. Overall, though, it was another quiet session for the currency pair.

This has left daily support at $1.3082 in a somewhat negative light. Recent analysis noted the following:

Daily support at $1.3082, as you can see, remains fragile, incapable of stirring interest last week and on the brink of giving way. This is supported by the relative strength index (RSI) pulling lower from the 50.00 centreline (negative momentum) on the daily timeframe. For any longer-term trend followers watching the longer-dated moving averages, you will note the currency pair continues to operate south of the 200-day simple moving average at $1.3542—a (technical) bearish view.

Not only does the daily timeframe echo weakness, the weekly timeframe also reveals a downside bias. The following text was taken from previous analysis:

Thursday’s lacklustre movement has also seen little change on the lower timeframes. Therefore, here’s a reminder of where we left the charts heading into Thursday’s session:

As can be seen from the H4 timeframe, price left prime resistance at $1.3228-1.3186 unopposed and has since navigated lower. Ultimately, the chart displays little in terms of support until reaching the $1.2965ish region, closely shadowed by a 100% Fibonacci projection coming in from $1.2936 (AB=CD structure). On the H1 timeframe, price retested the lower side of $1.31 and respected the base. Interestingly, limited support is observed until the widely watched $1.30 figure, while above we can see Quasimodo resistance at $1.3145.

Given weekly prime resistance at $1.3473-1.3203 receiving price action, in addition to trend direction facing southbound, upside efforts from daily support at $1.3082 are fragile. For that reason, chart studies indicate possible clearance of the level. With H1 price cementing position sub $1.31, this helps ‘confirm’ a bearish theme and may persuade short-term players to commit, targeting $1.30.

As you can see, H1 remains sub $1.31 and appears poised to reach for $1.30 today. A move under the aforementioned psychological level could witness sellers take aim at H4 support from $1.2965.