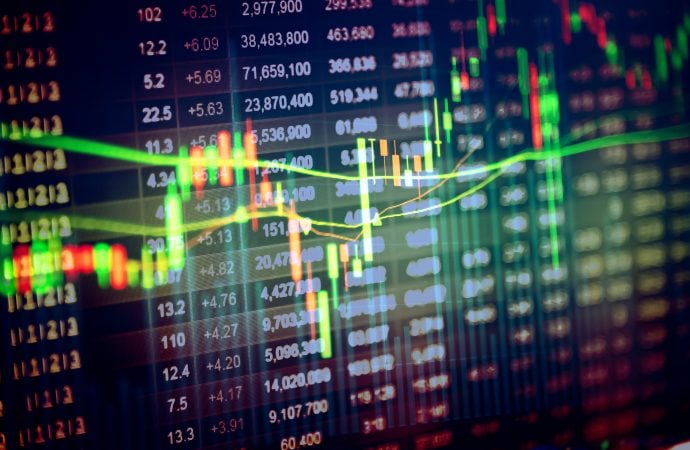 Following a three-month retracement, demand at 1.1857-1.1352 made an entrance and sparked a bullish revival in April, up 3.3 percent MTD.

Erasing March losses, April upside throws light on the possibility of fresh 2021 peaks, followed by a test of ascending resistance (prior support – 1.1641).

1.2058 support welcomed another retest on Wednesday, underpinning a modest bullish tone into the close. Additional bullish fuel was derived from USD softness, on the back of the US Federal Reserve keeping short-term interest rates anchored around zero (0.0% – 0.25%), and Fed Chair Jerome Powell stating it was ‘not time’ to talk about tapering asset purchases.

Quasimodo resistance now calls for attention at 1.2169, followed by another Quasimodo formation at 1.2278.

Momentum, according to the RSI oscillator, is within a whisker of entering overbought territory. Interestingly, within this space, resistance is arranged around 80.39.

Trend studies, as aired in recent analysis, reveal EUR/USD has been trending higher since early 2020 (many analysts will refer to this as a primary trend).

Buyers, as you can see, did indeed take control on Wednesday, establishing fresh monthly peaks at 1.2134. With this, technicians are likely to be eyeballing Quasimodo resistance at 1.2177 today.

Demand at 1.2049-1.2061 has proved an effective base. Early US trade on Wednesday had price pencil in a hammer candle formation from the aforesaid demand—typically viewed as a bullish signal—and subsequently dethrone 1.21 to shine light on 1.2138 resistance.

The RSI oscillator recently spiked within close proximity of overbought territory and mildly corrected to 65.00. RSI resistance is seen parked around 78.97.

For those who read Wednesday’s technical report, the piece aired the following (italics):

With 1.21 giving way on Wednesday, a retest of the latter today could spark continuation buying, with, as noted above, the majority of price action traders taking aim at H1 resistance from 1.2138.

Resistance at 0.7817 remains a focal point on the daily scale, proving a stubborn ceiling since the beginning of March.

In terms of the RSI oscillator, we remain navigating territory above the 50.00 centreline, with channel resistance, extended from the high 80.12, in sight (plotted below overbought). Momentum, according to this indicator, remains northbound for the time being.

Following less-than-stellar Aussie CPI data early trade Wednesday, the unit nosedived into the walls of demand at 0.7725-0.7737. Despite mildly clipping the lower edge of the aforesaid demand, a recovery play emerged and eventually elevated price to 0.78, which, as you can see, holds as resistance.

Breakout buyers above 0.78, as aired in recent analysis, are likely to be wary of daily resistance at 0.7817. Overthrowing 0.78 and holding, on the other hand, underlines 0.7850 resistance.

With respect to the RSI oscillator on the H1 scale, we shook hands with overbought space as price challenged 0.78. RSI resistance at 80.85, therefore, is perhaps worth noting.

While a bullish breakout theme above 0.78 on the H1 is clouded by daily resistance at 0.7817, the lack of bearish interest seen around the aforesaid daily base could motivate a bullish push. Therefore, a H1 close above 0.78 today, followed up with a decisive retest in the form of support, could be enough to encourage buying to at least 0.7850 resistance on the H1.

April, currently down 1.9 percent, is seen attempting to climb back through the breached descending resistance.

RSI movement is seen engaging the underside of the 50.00 centreline, stationed beneath resistance at 57.00.

108.99 resistance made an entrance on Wednesday and, as you can see, motivated a bearish presence. This shifts focus back to support pinned at 108.50 and neighbouring demand plotted at 108.20-108.43—effectively the decision point prior to climb 108.50.

Supply-turned demand at 108.57-108.46 commanded position in recent movement, following a one-sided decline from the 109 figure. What’s technically interesting is the current demand houses H4 support at 108.50.

Note we also have the 100-period simple moving average circling around 108.25, should sellers engulf the aforementioned demand (the SMA is seen within H4 demand mentioned above at 108.20-108.43).

According to the RSI indicator, the value voyaged south of the 50.00 centreline on Wednesday and is now within touching distance of oversold space and RSI support at 18.76.

However, traders are urged to pencil in the possibility of a dip into H4 demand at 108.20-108.43, joined by not only the 100-period simple moving average on the H1, but also daily trendline support.

GBP/USD chalked up a fourth successive bullish close on Wednesday, eking out a 0.2 percent gain on the session.

Technical structure to be mindful of can be seen at resistance around 1.4003, closely shadowed by trendline support-turned resistance, taken from the low 1.1409. Lower on the curve, 1.3670 bottoms are visible, arranged north of Quasimodo support at 1.3609 and associated Fibonacci confluence (commonly referred to as a Fib cluster).

Technical studies from the H4 scale reveal price action travelled through resistance at 1.3919, likely removing a large portion of any offers around this region. Quasimodo resistance at 1.4007 is seen overhead, should buyers maintain position.

Latest developments out of the H1 chart show short-term flow climbed above 1.39 early US and subsequently retested the psychological level as support. This triggered an additional wave of buying, movement which marginally spiked above supply at 1.3946-1.3925. Deprived of resistance above current supply could have the currency pair take aim at the key figure 1.40.

RSI structure has the value above the 50.00 centreline, currently inching towards overbought waters. Note that within this area, resistance is arranged at 84.66.

Having seen the range of H1 supply at 1.3946-1.3925 tested yesterday—in addition to daily price displaying scope to approach resistance at 1.4003 and H4 recently taking on resistance from 1.3919—follow-through buying could materialise to target the key figure 1.40 on the H1. A 1.39 retest, therefore, may attract bullish flow, particularly if the 100-period simple moving average aligns with the psychological base.