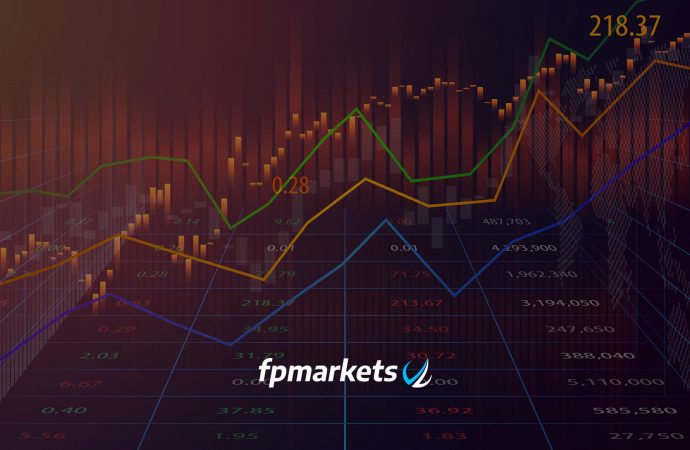 April, as you can see, has spent the best part of the month feasting on the top edge of 1.0488/1.0912, threatening the possibility of moves lower.

Despite a spirited advance in early trade Tuesday, EUR/USD failed to maintain a presence north of highs at 1.0888. The end-of-day correction formed what appears to be a gravestone doji candlestick, generally interpreted as a bearish signal among candlestick traders. This, along with Monday’s lacklustre performance, certainly places a question mark on the comeback off the 78.6% Fib level at 1.0745.

Demand at 1.0526/1.0638 continues to call for attention, an area extended from March 2017. Additionally, technical research has a potential ABCD correction (orange) lining up around the upper edge of the aforementioned demand.

Tuesday’s analysis underscored the possibility of an upside attempt towards trendline resistance (1.1147), positioned close by tops around the 1.0890 neighbourhood and a 61.8% Fib level at 1.0888.

As evident from the chart, European hours welcomed price action at the said resistances on Tuesday, pencilling in a notable move to the downside amid US hours. Aside from the possibility of support developing off last Friday’s low at 1.0727, demand at 1.0602/1.0630 remains an obvious target.

The reaction off the current H4 trendline resistance, as well as a broad-based USD pullback, guided intraday flow sub 1.0850 as we stepped into US trading Tuesday, identifying the 100-period simple moving average (SMA) at 1.0814 as the next possible floor.

1.08, if tested, may turn the dial, though having seen the response from H4 trendline resistance, buyers are likely to be squeezed here, highlighting a supply-turned demand base coming in from 1.0774/1.0761.

Monthly demand at 1.0488/1.0912 has so far encouraged little to the upside. Daily price is also struggling to capitalise on the rebound from 1.0745, recently shaping back-to-back shooting star candlestick patterns, emphasising a bearish tone.

It was underlined in yesterday’s analysis that H4 trendline resistance (1.1147) will likely be of interest for sellers and that a move beneath 1.0850 on the H1 timeframe could see traders reduce risk to breakeven.

On account of the above, short sellers from the said H4 trendline resistance have likely reduced risk to breakeven, with intraday crosshairs now fixed on the 100-period SMA on the H1 timeframe and the 1.08 handle. A break of 1.08 would light up the path to 1.0774/1.0761 on the H1 timeframe, persuading further selling. The ultimate target for shorts, nonetheless, is set at daily demand discussed above from 1.0526/1.0638.

Upbeat risk sentiment, together with diminished demand for the greenback, observed AUD/USD list its fifth successive daily gain Tuesday, uncovering supply from 0.6618/0.6544. It should also be emphasised that this area comes with a 127.2% Fib ext. level at 0.6578 and a nearby 161.8% Fib ext. level at 0.6642. In addition, the RSI indicator is seen fast approaching its overbought level.

The harmonic Gartley formation, boasting a defining limit at the 78.6% Fib level from 0.6433, remains a focal point on the H4 timeframe, despite the week’s advance thus far. The said pattern, technically, remains valid until breaking the X point at 0.6684.

Despite an early retreat to lows at 0.6434, the pair regained its footing into Europe Tuesday and mounted the 0.65 handle. Although the psychological point echoes a fragile tone, 0.65 remains a resistance on this timeframe. In the event buyers muster enough strength to overrun 0.65, we see stacked supply between 0.6612/0.6543, whereas moves lower has trendline support in view (0.6282) and a supply-turned demand at 0.6461/0.6435.

Indicator-based traders may also want to pencil in bearish divergence out of overbought territory (black line). 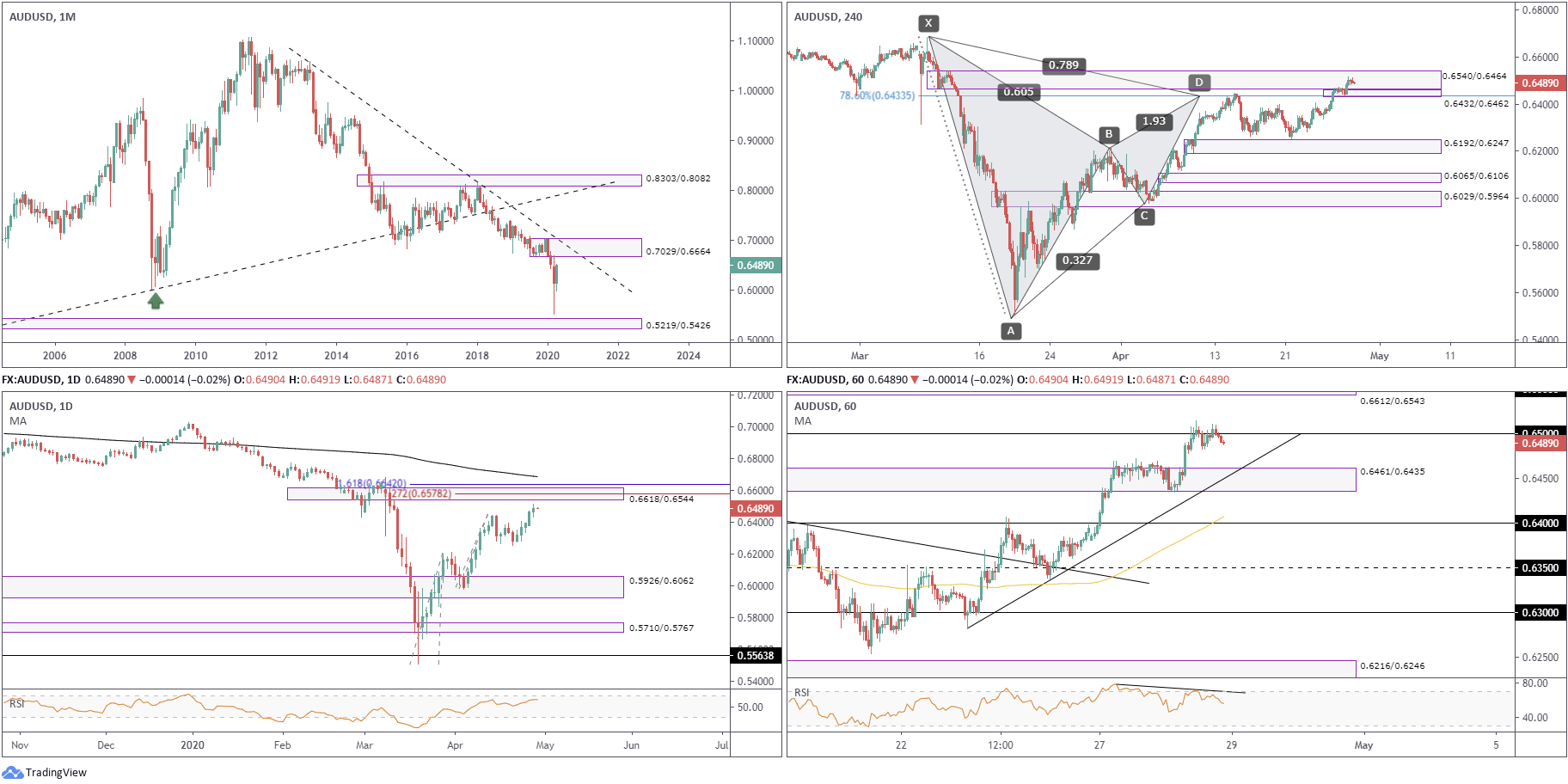 Demand from 105.70/106.66 greeted price action Tuesday after consolidating south of the 200-day simple moving average (SMA) at 108.28 since mid-April.  Should the said demand cede ground, we can potentially look forward to demand plotted at 100.68/101.85 making an appearance.

Demand at 106.75/107.22 has remained a feature since the beginning of the month, though thanks to yesterday’s slump we dipped a toe in waters south of the zone.

Interestingly, since mid-April the candles have been compressing within a bearish pennant pattern between 106.92/108.07, with Monday observing a bearish close form beneath the pattern’s lower limit. Yesterday’s follow-through downside is a strong sign we could be heading for demand at 105.75/105.17. Traditionally, take-profit targets are formed by measuring the preceding move (109.38-106.92) and adding this value to the breakout point (black arrows).

Heading into Europe Tuesday, sellers strengthened their grip and slid through demand at 106.99/107.16 and the 107 handle, reaching lows at 106.56 before mildly paring losses into the close.

Daily price recently crossed paths with demand at 105.70/106.66; bulls therefore may look to make a show. 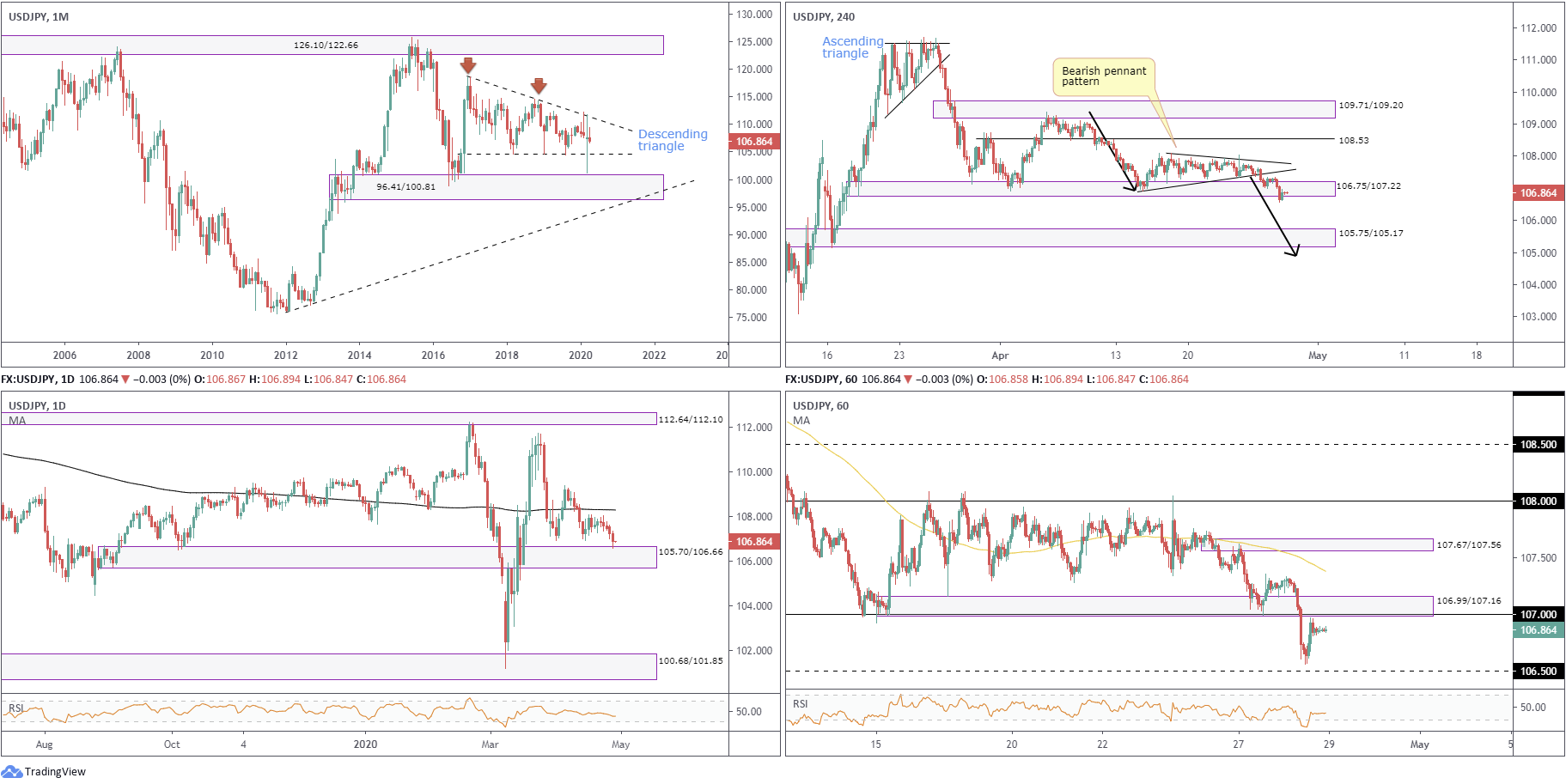 1.25 nudged its way into the limelight Tuesday, with price action pencilling in an array of selling wicks. This, along with 1.25 being a widely watched figure, was likely enough to encourage technical selling.

Recent hours witnessed 1.2450 yield with the said base shortly after serving as resistance. 1.08 is likely to call for attention today, with a whipsaw of the level into demand at 1.2379/1.2393 expected. It should also be noted the 100-period simple moving average (SMA) is seen interacting with the noted zone.

Coming from H4 supply at 1.2622/1.2517 places 1.24 in the firing range today. This figure, as well as the small H1 demand base at 1.2379/1.2393, and the 100-period SMA, could offer intraday buyers a stage today. How much of a move is seen out of the said area, though, is difficult to judge. Not only have we H4 price tumbling from supply, but monthly price is showing little enthusiasm to the upside.

An alternative is the current H1 trendline support. Unfortunately, this level also faces the same issues as the H1 supports underlined above. 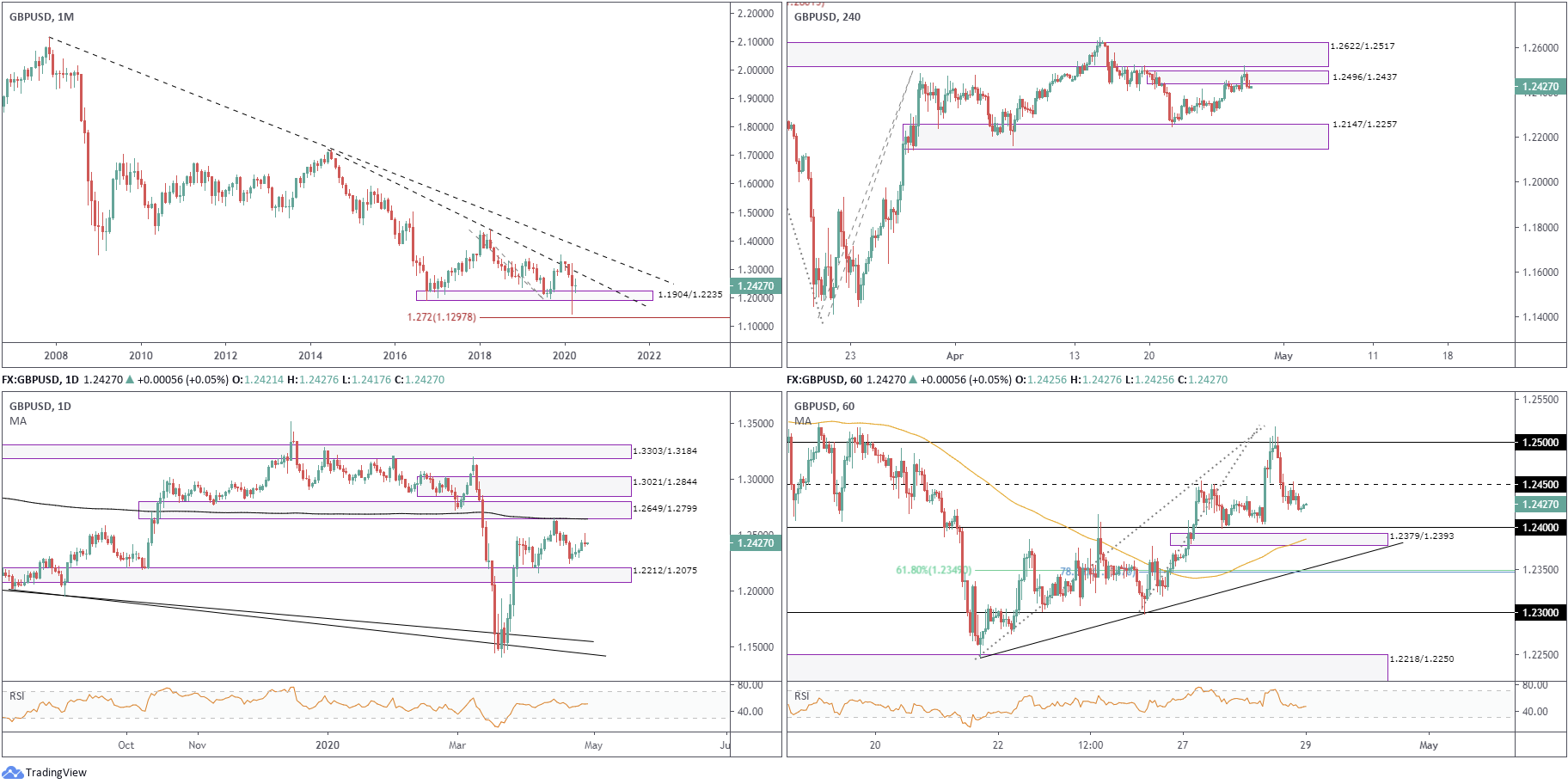