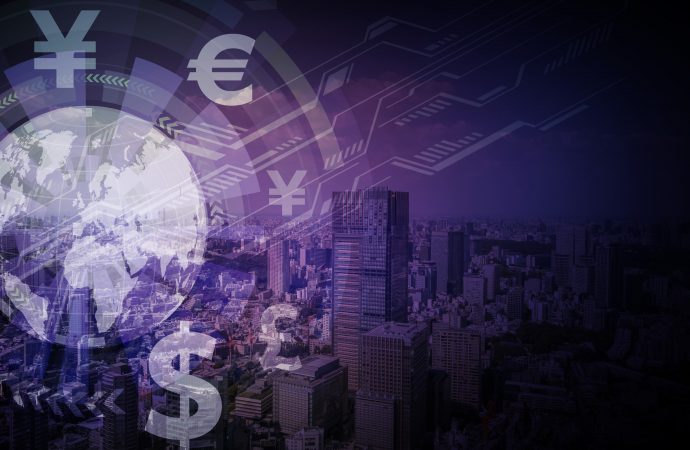 Following the three-month retracement slide, demand at 1.1857-1.1352 sparked a bullish revival in April, up 2.3 percent MTD. The possibility of fresh 2021 peaks is on the table, followed by a test of ascending resistance (prior support – 1.1641).

In terms of where the RSI oscillator stands, the value recently levelled off south of overbought space and dropped through 60.00.

In spite of a somewhat hawkish ECB vibe, Europe’s single currency struggled to secure a bid against the US dollar on Thursday.

Quasimodo resistance at 1.2070—a level sharing space with a Fib cluster (1.618% Fib expansion at 1.2068 as well as a 100% projection at 1.2066)—delivered a solid ceiling heading into the early hours of US trade on Thursday, with price subsequently travelling below the 100-period simple moving average at 1.2024 to shake hands with the 1.20 figure (joined by a Fib cluster between 1.1994 and 1.2001). Candlestick enthusiasts will note the 1.20 test established a hammer pattern (usually interpreted as a bullish signal at lows).

With reference to the RSI oscillator, bullish divergence could form as the value circles territory above support at 35.45.

1.20 is a widely watched psychological base. In light of Fib confluence adding weight to the round number, and the recent test in the shape of a H1 hammer candle, a bullish wave could come about and at least test the 100-period simple moving average at 1.2024. However, traders are urged to pencil in the possibility of a whipsaw to H4 support at 1.1990 before buyers attempt to take the wheel.

Monthly demand at 1.1857-1.1352 supports buying, yet daily price rejecting resistance at 1.2058 casts a bearish cloud over the currency pair.

Despite an initial non-committal tone, sellers took control beneath 0.7817 resistance Thursday amidst sour market sentiment and muscular USD demand. Sustained interest to the downside elbows February’s low at 0.7563 into the spotlight, with subsequent selling highlighting demand at 0.7453-0.7384 and the 200-day simple moving average at 0.7436.

The technical view from the RSI oscillator reveals momentum levelling off under the 60.00 mark, with the value poised to cross swords with the 50.00 centreline.

The tail end of Thursday’s session witnessed price movement dive into the walls of 0.7696-0.7715 demand, lightly clipping the lower edge of the aforesaid area.

Downstream, Fibonacci traders will note a Fib cluster formed between 0.7667 and 0.7679. This area is made up of Fib extensions, Fib expansions and Fib retracement levels. Although technically confluent, the Fib cluster is sited just north of trendline support, extended from the low 0.7531, therefore a whipsaw through the Fib cluster is perhaps on the table.

The technical landscape on the H1 scale shows price action carved out a dragonfly doji candlestick (typically viewed as a bullish candle at lows) in recent hours, a formation which pierced through 0.77 (likely tripping stops beneath the round number) and tapped the upper side of demand at 0.7679-0.7695. Note the said demand area represents the decision point to break above 0.77 in mid-April.

In conjunction with H1 price action, the RSI shows signs of bullish divergence ahead of oversold territory.

Despite USD demand, and US equities taking a hit on the back of a Bloomberg report stating US President Biden may hike capital gain’s tax, USD/JPY remained pretty much unchanged on Thursday.

The spotlight, therefore, remains firmly on trendline support, etched from the low 102.59, as well as demand plotted at 107.58-106.85 (prior supply) and a 38.2% Fib level at 107.73. Voyaging into the aforesaid areas underlines the possibility of a bullish revival.

Although late US trade invited downside moves, stirred on the back of a JPY safe-haven bid, demand at 107.81-108.01—benefits from a Fib cluster around 108ish—continues to underpin price movement.

108.50 resistance, as you can see, is arranged to the upside. Should the aforesaid demand move aside, however, welcoming support at 107.44 could be on the cards.

The 108 psychological support extended its presence on Thursday, though buying pressure from the level appears deflated, weighed by trendline resistance, taken from the high 110.55, and the 100-period simple moving average at 108.19. Additional zones to the upside to be mindful of are supply areas at 108.57-108.46 and 108.60-108.71.

From the RSI, we can see the recent dip in price hauled the RSI value to within striking distance of the 50.00 centreline.

Quasimodo support calls for attention at 1.3750 should sellers remain in the driving seat.

Buyers abandoned the 1.39 figure mid-way through London hours on Thursday, offered lower on the back of a bearish presence from the underside of the 100-period simple moving average around 1.3916 (and RSI action holding under resistance at 54.88).

The 1.39 breach, as you can see, ignited breakout selling, though momentum to the downside slowed as we transitioned to the US session.

Technicians may also note the RSI nosedived into oversold space, testing lows of around 22.50.

H1 testing 1.38 confluence is likely to spark short-term bullish interest, yet whether movement from the level would be enough to take on bearish flow under H4 resistance at 1.3852 is difficult to estimate. With that, traders interested in 1.38 may consider waiting for additional candlestick confirmation to form before pulling the trigger—think bullish engulfing pattern or hammer formation.