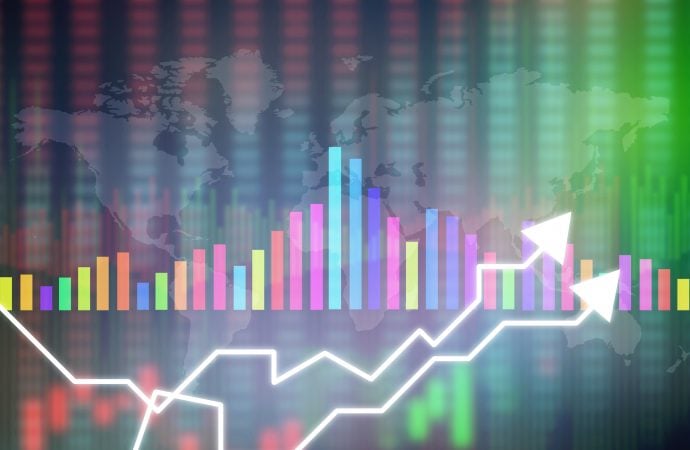 Hawkish ECB commentary and a broadly softer USD underpinned EUR/USD on Wednesday. This—coupled with the ‘technical lift’ from weekly support—observed a 0.5 per cent advance. Although the currency pair has been stepping lower since the beginning of 2021, Quasimodo support at $1.0778, complemented by channel support (extended from the low $1.1186), recently made an entrance.

Weekly support putting in an appearance slowed breakout sellers south of the ascending line on the daily timeframe, drawn from the $1.0340 3rd January low 2017. Whether the weekly levels are enough to put the brakes on selling, however, is challenging to estimate at this early juncture. In support of bullish activity is the daily timeframe’s relative strength index (RSI). Since 12th April, the indicator has been levelling off around 38.00, supporting the possibility of positive divergence. Voyaging above the 50.00 centreline would help confirm an upside bias.

Alongside the current downside bias on the bigger picture, H1 prime resistance at $1.0906-1.0892, as well as additional surrounding H1 technical confluence, may draw bearish attention if tested.

AUD/USD bulls went on the offensive Wednesday, gaining 1 per cent at the close of European trading and elevating the currency pair north of $0.74. Aided by USD softness, H1 action is now on the doorstep of resistance from $0.7467. Overthrowing the aforementioned level unlocks the door to $0.75 and prime resistance at $0.7509-0.7527. Higher up on the scale, nonetheless, H4 resistance is active at $0.7451, plotted nearby a decision point at $0.7492-0.7466. This follows the recent recovery from H4 Quasimodo resistance-turned support at $0.7349 and trendline support convergence, etched from the low $0.6968.

Across the page on the higher timeframes, price remains languishing south of prime resistance at $0.7849-0.7599 on the weekly timeframe, following a reaction from the area in early April by way of a shooting star candlestick formation. Longer term, the trend has been lower since August 2011, therefore further bearish action could materialise. Trendline resistance-turned support, extended from the high $0.8007, proved solid support in recent days on the daily timeframe, positioned north of the 200-day simple moving average at $0.7293. Continued interest higher up could see the 100% Fibonacci projection at $0.7645 targeted.

We’re still seeing a difference of opinion on the bigger picture at the moment. Structurally, the daily timeframe’s trendline resistance-turned support is delivering a floor to work with, while weekly prime resistance caps upside at $0.7849-0.7599 in a market trending lower (long term). Overall, higher timeframes tend to take precedence over lower time periods, therefore buying pressure may eventually deteriorate.

The ¥128.66-127.64 supply area on the daily timeframe had its upper edge stripped in recent movement, perhaps clearing the pathway for neighbouring daily supply at ¥130.65-129.57. Interestingly, the currency pair also pencilled in its first bearish close in 13 trading days; could this be enough to draw price to the weekly support at ¥125.54? Adding to the daily timeframe’s technical picture, we can see the relative strength index (RSI) peaked around 87.52 resistance again on Tuesday (a level boasting historical significance as far back as 2014). Note that this is technically the early stages of a double-top within the RSI. Exiting overbought space is considered a bearish indication by many technicians. However, in upward facing markets, such as the one we’re clearly in now, false bearish signals are common. If the RSI value does eventually tunnel lower, the 40.00-50.00 area of support may be targeted (served as a ‘temporary oversold’ base since May 2021).

The H1 support area between ¥126.73 and ¥127 could be a target for buyers in the event the unit continues to explore space south of ¥128. Alternatively, reclaiming ¥128+ status might pull in breakout buying interest, targeting ¥129.

The British pound outperformed against its US counterpart on Wednesday, adding 0.5 per cent.

We can see that despite a healthy move higher yesterday, long-term trend direction on the weekly chart has been southbound since late 2007 tops at $2.1161. As a result, the 25 percent move from pandemic lows ($1.1410) in March 2020 to February 2021 might be viewed as a pullback within the larger downtrend. This, of course, places a question mark on the 8.5 percent ‘correction’ from February 2021 ($1.4241) to April 2022, suggesting the possibility of continuation selling. The bearish trend, in addition to price rejecting the lower side of prime resistance at $1.3473-1.3203 with room to push towards weekly support at $1.2719, adds to the bearish environment. This, coupled with space to move lower on the daily timeframe to support at $1.2862 (and channel support) and the daily timeframe’s relative strength index (RSI) holding beneath the 50.00 centreline, could hinder further buying.

As evident from the H1 timeframe, $1.30 continues to serve well as support, strengthened by the 100% Fibonacci projection at $1.2985. Recent hours witnessed price dethrone H4 resistance at $1.3051 and subsequently retest the barrier as support. $1.31 is seen overhead and may well be challenged should buyers defend $1.3051.

The break above H4 resistance at $1.3051 has likely interested short-term buyers in this market, in spite of the higher timeframes leaning on lower prices. With that said, chart studies reveal limited resistance until $1.31, therefore a short-term bullish scenario may unfold as we head into more liquid sessions today.