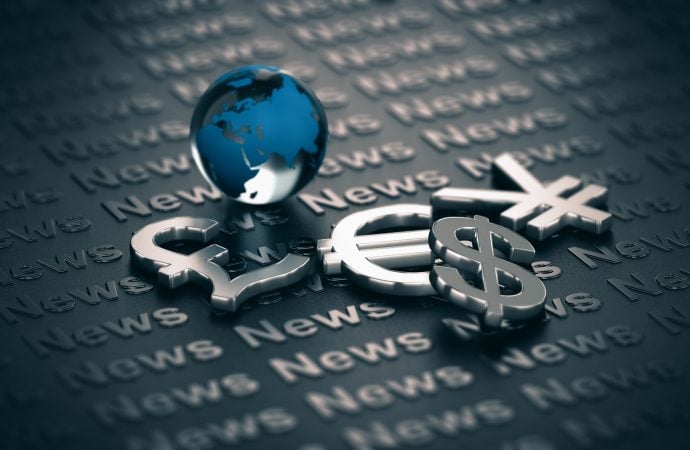 A closer reading of price action on the daily timeframe shows the unit pencilled in a healthy bullish advance on Monday, amid intensified USD selling (US dollar index [DXY] approaching 91.00).

Recent outperformance, as you can see, not only extended the bullish position north of the 200-day simple moving average at 1.1906, the move elbowed resistance at 1.2058 into the spotlight, with subsequent buying throwing light on Quasimodo resistance at 1.2169.

Trend studies show the pair has been trending higher since early 2020 (many analysts are likely to refer to this as the primary trend).

Following an earlier hammer candle (a bullish formation at troughs) arising just north of support at 1.1937, 1.1990 resistance—a level capping upside since mid-March—stepped aside Monday, consequently unearthing supply at 1.2101-1.2059 which happens to rest on top of daily resistance at 1.2058. Technicians will note that a 1.1990 retest (as support) could materialise prior to testing the aforesaid supply.

Early hours Monday had price stage a one-sided recovery from demand at 1.1956-1.1945, aided by the 100-period simple moving average and RSI support at 35.45. Moves through 1.20, an advance likely catching many short sellers off guard, will likely have technical analysts eyeballing the Quasimodo formation at 1.2070 as a possible resistance (sharing chart space with a 1.618% Fib expansion at 1.2068 as well as a 100% projection at 1.2066).

The view from within the RSI oscillator reveals the value spiked into overbought terrain on Monday and shook hands with highs just south of resistance from 78.97. Note that the indicator concluded the session exiting overbought, a bearish signal among many technical traders. However, with support lurking at 59.66, any downside momentum could be short-lived.

The Australian dollar eked out modest gains against a weaker USD to kick off the week, shining the technical spotlight on resistance at 0.7817. North of the latter, supply at 0.8045-0.7985 is on the radar.

Momentum remains above the 50.00 centreline, according to the RSI oscillator. Increased upside momentum is likely to elbow things to channel resistance, drawn from the high 80.12.

Quasimodo resistance at 0.7800 deserves notice as the next potential ceiling, closely stationed beneath demand-turned supply from 0.7848-0.7867.

As evident from the H1 chart, price action recently bottomed a few pips north of the 0.77 figure, a level joined closely by demand at 0.7679-0.7695. This is an important area as it was within this base a decision was made to break above 0.77.

Also technically noteworthy is the 100-period simple moving average at 0.7724 and, of course, the 0.78 figure, which may serve as resistance, should we navigate higher terrain.

RSI movement peaked within overbought territory on Monday, coming within striking distance of resistance at 80.85, before retreating to the 50.00ish neighbourhood. With the immediate trend facing higher, the 50.00 region could deliver a supportive base.

Daily, H4 and H1 timeframes suggest a short-term bullish phase could emerge, with 0.78ish serving as an upside target, followed by daily resistance at 0.7817. This could stir a dip-buying scenario today, particularly if H1 retests the 100-period simple moving average currently around 0.7725.

Sustained USD weakness, amidst a softer risk tone on Monday, guided USD/JPY lower by 0.5 percent and closed a touch off session lows.

As a result of recent weakness, trendline support, etched from the low 102.59, as well as demand plotted at 107.58-106.85 (prior supply) and a 38.2% Fib level at 107.73 deserves notice. Voyaging into the aforesaid areas today unlocks the possibility of a bullish revival, technically speaking.

RSI action recently journeyed beneath support at 57.00, and dipped a toe under 40.00 yesterday. This implies momentum remains to the downside for the time being, threatening moves into oversold space.

Thanks to Monday’s squeeze lower—movement that overturned demand at 108.31/108.50—price action crossed swords with interesting demand from 107.81/108.01, which benefits from a Fib cluster around 108ish.

Should the aforesaid technical areas fail to stimulate bullish activity today, support at 107.44 could make an entrance, set within the walls of daily demand mentioned above at 107.58/106.85.

108 welcomed price action heading into US trading hours on Monday, stirring a modest bullish vibe. Reinforced by H4 demand at 107.81/108.01, and the Fib cluster glued to its upper edge, the H1 chart may witness candle action test resistance at 108.39, with a break potentially calling for supply at 108.60/108.71 (and trendline resistance, taken from the high 110.55).

RSI action, as you can see, is circling 40.00, following an earlier bottom within oversold space. Upstream, trendline resistances are seen around 45.00.

However, should the pair explore lower levels and test H4 support at 107.44, this barrier packs more of a bullish punch, having seen the base align with daily demand at 107.58/106.85.

April, however, thanks to yesterday, is now trading higher by 1.5 percent.

Leaving Quasimodo support at 1.3609 unchallenged, sterling ended Monday on the front foot against the US dollar and closed a few pips off session tops.

In terms of structure, trendline support-turned resistance, taken from the low 1.1409, is next on tap, with a breach unmasking 2021 peaks around 1.4241 and Quasimodo resistance at 1.4250.

RSI activity is now within touching distance of overbought waters (in particular resistance at 76.14) after cementing position above the 50.00 centreline.

The latest to come out of the H4 chart is the break of resistance at 1.3852 in dominant fashion, movement that highlights Quasimodo resistance parked at 1.4007. Beyond here, technical structure shows limited resistance until around the 1.4200 neighbourhood.

What’s technically appealing is that not only is 1.40 a widely watched psychological level, it benefits from additional technical confluence in the form of a H4 Quasimodo resistance at 1.4007 and daily trendline resistance.

With respect to the RSI oscillator, the indicator reveals upside momentum somewhat levelling off within overbought territory, after testing tops at 87.50.

As underlined above, the central element this morning is the 1.40 figure, knowing the barrier brings with it additional technical confluence in the shape of a H4 Quasimodo resistance at 1.4007 and daily trendline resistance.