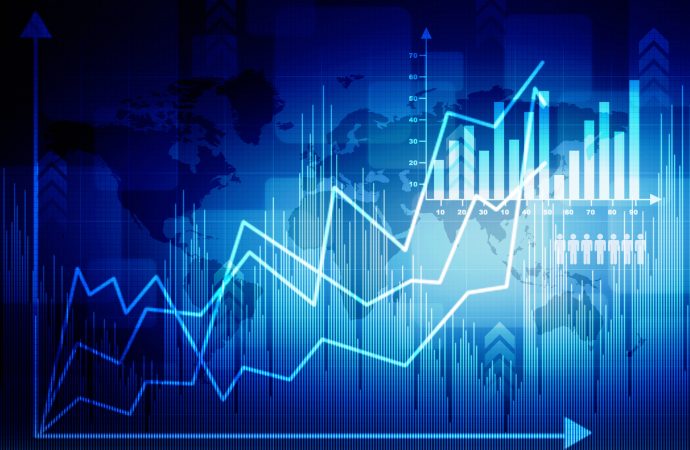 April’s 1.8 percent rebound thus far shifts attention to the possibility of fresh 2021 peaks and a test of ascending resistance (prior support – 1.1641). Extending lower, on the other hand, shines the technical spotlight on trendline resistance-turned support, taken from the high 1.6038.

Trading primarily as a function of USD weakness, EUR/USD movement adopted a bullish phase Tuesday and consequently recorded fresh multi-week peaks. Resistance at 1.1966 is next in line, with a break unmasking additional resistance at 1.2058.

The 200-day simple moving average continues to echo supportive structure, following an upside breach in the second half of last week.

RSI analysis shows upside momentum continues to gather traction, after the value swept through trendline resistance (taken from the peak 75.97) and formed a bullish failure swing (a sign of a potential reversal). Resistance is now in sight at 60.30.

1.1974/1.1965 supply is next in the firing range should buyers maintain a bullish trajectory today. Traders, however, are also urged to pencil in the possibility of a 1.1919 support retest.

Thanks to recent upside, RSI movement rebounded from trendline support, taken from the low 20.50, and has made its way to within touching distance of overbought space and RSI resistance plotted at 78.97.

The technical view from the monthly scale implies a bullish theme could develop, given we’re coming from demand at 1.1857/1.1352. However, buyers face daily resistance at 1.1966, closely shadowed by H4 resistance at 1.1990.

With the above in view, a short-term bullish scenario may materialise today, taking out H1 supply at 1.1956/1.1935 and testing H1 supply at 1.1974/1.1965. It is the latter zone that sellers could make an appearance from, given this area shares chart space with daily resistance at 1.1966. Any bullish moves north of here, nevertheless, buyers could reach for the key figure 1.20 (and H4 resistance at 1.1990).

Since 25th March, buyers and sellers have been squaring off around the 0.7563 February low, aided by a 1.272% Fib extension at 0.7545. Tuesday concluded in the shape of a bullish outside reversal (similar formation to a bullish engulfing pattern, though focuses on the range of the previous candle rather than the real body).

Any decisive downside shines the technical spotlight on Quasimodo support at 0.7529, a level joined closely by a trendline resistance-turned support, taken from the high 0.7805.

Heading into the early hours of US trading Tuesday, price movement speared through 0.76 to shake hands with a Fib cluster around 0.7586. Strong bids soaking up sell-stops south of 0.76 lifted the currency pair north of the 100-period simple moving average to 0.7650ish, adding 0.3 percent on the day.

Limited (obvious) resistance shifts technical interest to the 0.77 figure, a psychological base sheltered under supply drawn from 0.7716/0.7707 (an important decision point to initially push below 0.77).

Action out of the RSI oscillator reveals the value testing space just south of overbought territory, threatening moves to resistance at 80.85.

In conjunction with higher timeframes, the H4 trendline resistance as well as H4 resistance at 0.7668 may be on the radar for short-term sellers today.

April, currently down 1.5 percent, is seen retesting the breached descending resistance, movement that may entice bullish flow. With respect to long-term upside targets, supply at 126.10/122.66 calls for attention.

The US dollar notched up a second consecutive decline against the Japanese yen Tuesday, in line with US Treasury yields also dipping lower (the benchmark 10-year US Treasury yield ended lower by nearly 3 percent).

Despite supply at 110.94/110.29 limiting upside since the beginning of April, the monthly timeframe testing descending resistance-turned support places a question mark on further selling. Therefore, technically speaking, the collection of lows around 108.36ish (green oval) could limit downside moves.

RSI action journeyed beneath support at 57.00 in recent trading, implying that momentum remains firmly to the downside for the time being.

Sterling wrapped up Tuesday off worst levels against a broadly weaker greenback; GBP/USD has staged a moderate comeback so far this week off March 25th Lows at 1.3670.

The RSI failed to find acceptance north of the 50.00 centreline last week, though at the same time is reluctant to explore levels south of 40.00.

Shorter-term flow on the H4 chart has support in play at 1.3680, delivering a floor to work with on Monday. Upside attempts have so far been limited by a 38.2% Fib level at 1.3763, as well as trendline support-turned resistance, taken from the low 1.3670.

External areas to be cognisant of are 1.3852 resistance and the Quasimodo support mentioned above on the daily timeframe at 1.3609.

1.37 welcomed price action on Tuesday, fuelling a healthy bid into the US session (aided by RSI trendline support, taken from the low 27.58). As you can see, this elevated GBP/USD above the 100-period simple moving average to test the mettle of 1.3750 resistance.

The daily timeframe’s Quasimodo support at 1.3609 is likely to remain on the watchlist for many traders. Not only is this considered stable structure, the neighbouring Fib confluence reinforces its technical presence.

Across the page on the lower timeframes, H4 is attempting to overthrow a 38.2% Fib level at 1.3763, while H1 is battling 1.3750 resistance. A firm H1 close above 1.3750 may be enough to tempt breakout buying to around 1.38. Equally interesting, this psychological area may be sufficient to hold back buyers, given the level shares space with H1 Fib levels and also unites with H4 trendline support-turned resistance.