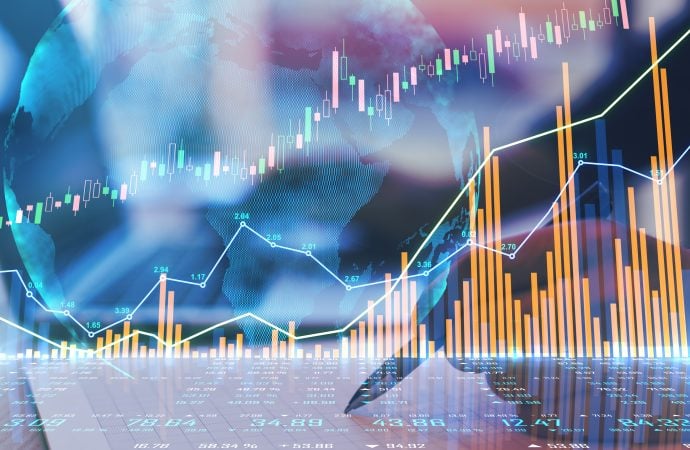 As traders and investors digest the effects of policy tightening, global equities navigated lower on Monday. US Treasuries continued to absorb bids as the 10-year yield clocked a high of 2.784%, levels not seen since early 2019. This weighed on major growth stocks and led the US Dollar Index (USDX) northbound, attempting to reclaim 100.00 to the upside.

In a market decisively trending lower since the beginning of 2021, EUR/USD, based on the weekly timeframe, is stationed ahead of Quasimodo support at $1.0778, complemented by weekly channel support (extended from the low $1.1186). Scope to press lower on the weekly timeframe places a question mark on the daily timeframe’s decision point at $1.0788-1.0854 (and ascending support, drawn from the $1.0340 3rd January low 2017). Interestingly, though, downside momentum is slowing according to the daily relative strength index (RSI), levelling off around 38.00ish.

Against the backdrop of higher timeframes, movement on the H1 timeframe dropped under $1.09 heading into US hours on Monday. This followed an earlier rejection from H1 Quasimodo support-turned resistance at $1.0931, a level serving well on numerous occasions since 6th April. To the downside, the technical radar is directed towards H4 prime support from $1.0785-1.0820 and H1 Quasimodo support at $1.0821.

Holding south of $1.09 signals short-term weakness, in line with the weekly timeframe’s downside bias. While further selling involves confronting the daily decision point zone at $1.0788-1.0854, technical evidence suggests sellers are in the driving seat. Therefore, additional weakness could be in the offing, targeting H4 prime support from $1.0785-1.0820 and H1 Quasimodo support at $1.0821.

Downbeat risk sentiment and spirited USD demand weighed on AUD efforts to the upside on Monday. Technically speaking, recent softness is not a surprise. Candlestick enthusiasts will acknowledge the week carved out a shooting star pattern from weekly prime resistance at $0.7849-0.7599. This, coupled with a market trending lower since August 2011, the daily timeframe has space to manoeuvre lower towards trendline resistance-turned support, extended from the high $0.8007, and a 38.2% Fibonacci retracement at $0.7397. Those who read previous writing may recall the unit withdrew from $0.7660 on 5th April: a daily double-bottom pattern’s ($0.6991) profit objective that dovetailed with a 100% Fibonacci projection at $0.7645 (AB=CD harmonic structure), as well as the weekly prime resistance noted above. One final point regarding the daily timeframe is the relative strength index (RSI) shaking hands with the 50.00 centreline after dropping from overbought territory in early April.

Lower on the curve, H4 price elbowed under $0.7451 and subsequently retested the level as resistance. This further adds weight to the bearish narrative, with room to drop as far south as H4 Quasimodo resistance-turned support at $0.7349. On the H1 timeframe, we can also observe the currency pair dipping a toe in waters below $0.7424, perhaps clearing the river south to $0.74.

While the daily timeframe remains above its 200-day simple moving average at $0.7295, the overall trend pointing lower and weekly price dropping from prime resistance at $0.7849-0.7599 indicates sellers may remain at the wheel. Consequently, further selling below H1 resistance at $0.7424 could be seen, targeting at least $0.74 (and daily support structure). Any downside beyond $0.74 shines light on H4 Quasimodo resistance-turned support at $0.7349.

Boosted on the back of rising US Treasury yields, the USD/JPY glided higher on Monday, extending to 3.2 percent MTD and adding to March’s eye-popping 5.8 percent rise. 1st June high (2015) remains on the watchlist in this market at ¥125.86, sharing chart space with the ¥126 figure applied to the H1 timeframe. Whether these levels contain enough technical ‘oomph’ to delay the decisive uptrend (since 2021) is difficult to estimate at this time.

Adding to the daily timeframe’s technical picture, we can see the relative strength index (RSI) peaked around 87.52 (a level not seen since 2014) in late March. Despite an immediate push lower, dipping a toe under the 70.00 threshold, the value remains within overbought territory. Exiting overbought space is considered a bearish indication by many technicians. However, in upward facing markets, such as the one we’re in now, false bearish signals are common. If the RSI value does eventually tunnel lower, the 40.00-50.00 area of support may be targeted (served as a ‘temporary oversold’ base since May 2021).

In terms of immediate support in this market, ¥125 calls for attention.

Sterling ended Monday largely unmoved against its US counterpart, ranging between $1.3056 and $1.2989. From a technical perspective, higher timeframe chart studies remain bearish.

The trend on the weekly timeframe, in addition to price rejecting the lower side of prime resistance at $1.3473-1.3203 with room to push towards weekly support at $1.2719, adds to the bearish environment. Further weighing on this market is the recent break of support on the daily timeframe at $1.3082, and potential clearance to daily support at $1.2862. Momentum also remains negative, according to the relative strength index (RSI) pulling lower from beneath the 50.00 centreline.

H4 resistance made its way into the spotlight on Monday at $1.3051, plotted closely with trendline resistance, taken from the high $1.3620. Based on the H1 timeframe, limited resistance is seen until $1.3074. Beyond here, H1 supply appears consumed until $1.31. While south of current price directs focus to $1.30 and the 100% Fibonacci projection coming in from $1.2936 (AB=CD structure).

Given weekly prime resistance at $1.3473-1.3203 receiving price action, in addition to trend direction facing southbound and daily price dropping beneath support at $1.3082, H4 resistance at $1.3051 and H4 trendline resistance nearby could prove a solid ceiling.