Fundamental feeds of the past week:

The feed into FX from the fundamentals has been the continued weakness in DXY.

Technical Feeds:
The dollar basket is under a level of pressure it hasn’t seen in many a year. The downside momentum is strong and is clearly backed on several technical fronts. We are cautious to fight momentum we would certainly prefer to ride it where possible and pick up parcels as we ride it to enhance positions but also to mitigate risks. However, that does not mean we should overlook the red flags that are presenting in several indicators across some pairs and in DXY itself. 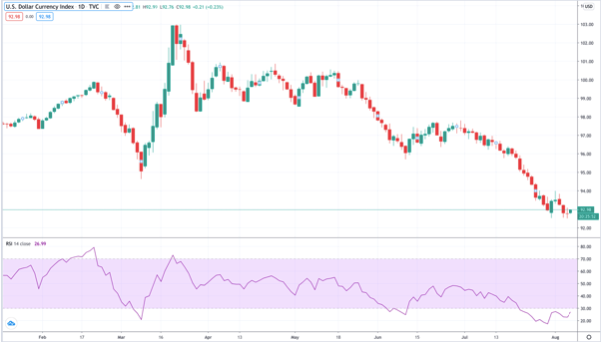 As we pointed out last week DXY does not stay below 20 on the RSI for very long and it’s been fighting its way out of the oversold position for the past week. Yet is still in an oversold position and this remains a caveat to the momentum trade of the past month and a half.

This means on a more granular level several pairs are slowing down and that is clearest in EUR/USD. 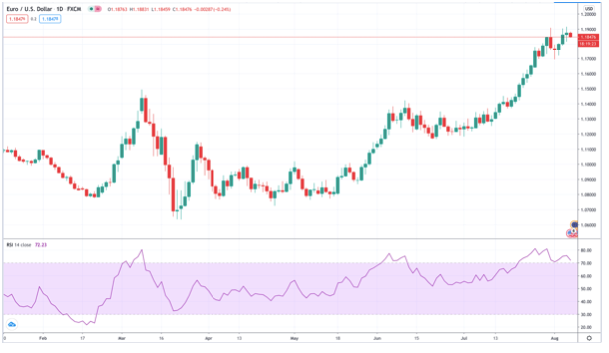 The astronomical speed and momentum in the pair are finally showing signs of exhaustion. There is a resistance level forming at $1.187 and the RSI is starting to move out of the overbought territory. It’s the pair most likely to ease in the near term and would be healthily for it to ease back to $1.17 levels.

That’s not to say there aren’t pairs with strong momentum and aren’t overbought. The clearest example here is the AUD/USD 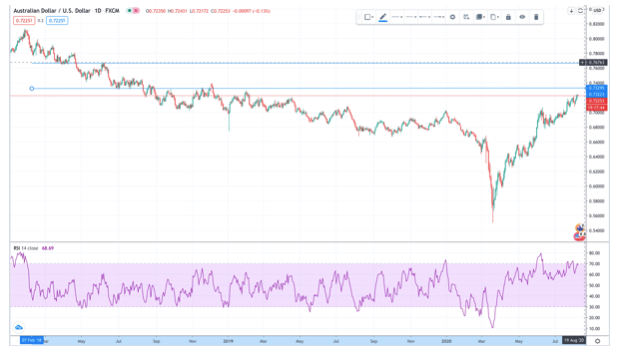 Pair is hovering just under the overbought territory at 68 on the RSI but when you factor in the fact the AUD/USD is up 31% from its low the momentum and value increase looks ‘toppy’.

However, it’s clear it’s not under the same technical pressures as its EUR peer. If we look at the longer-term chart the next resistance level is $0.733 from there $0.767. Its 5-year high would be the next level at $0.81 however that would need something really special to drive it to that level. Expect pair to slow rise slowly toward first and second resistance in the coming weeks.