[VIDEO] Currency Point: Flags and the other ‘currency’

Sometimes forgotten in the FX world is spot gold and spot silver are actually traded and priced in the FX market. And, considering the amount of interest both have received in the past few months it would be remiss not to dive into what has happened and what might happen going forward.

XAU/USD and XAG/USD had their worst trading day in seven years last Tuesday as a collision of US economics and a USD saying ‘enough is enough’ finally zapped the gold and silver bugs that have been caught staring at the ‘COVID-doom’ blub.

Spot gold and silver have been trading on a fundamental principle that inflation is nowhere to be seen and that global (really the US) economic is going to fall off a cliff.

However, if we have learnt anything in the post-COVID trading world, markets will take almost anything as a positive. US Inflation data is strengthening, global activity is improving even in the face of growing second waves and output is clearly better than the depths of the crisis in March – these are clear XAU and XAG negative feeds.

There is another point that could explain the collapse last week. US-listed Gold ETFs had two consecutive days of large outflows leading up to this correction – clear profit-taking, the question being could it be a repositioning movement for another attempt at the record?

Let’s drill into the technicals for possible clues.

I want to concentrate on XAU/USD as the inputs are clearer and more define than is a precious peer.

The initial break below the psychologically significant US$2,000oz not only consolidated but gathered pace as the week transpired. XAU/USD also finds itself some US$30 below the breakout point from August 4 a level that appears significant. 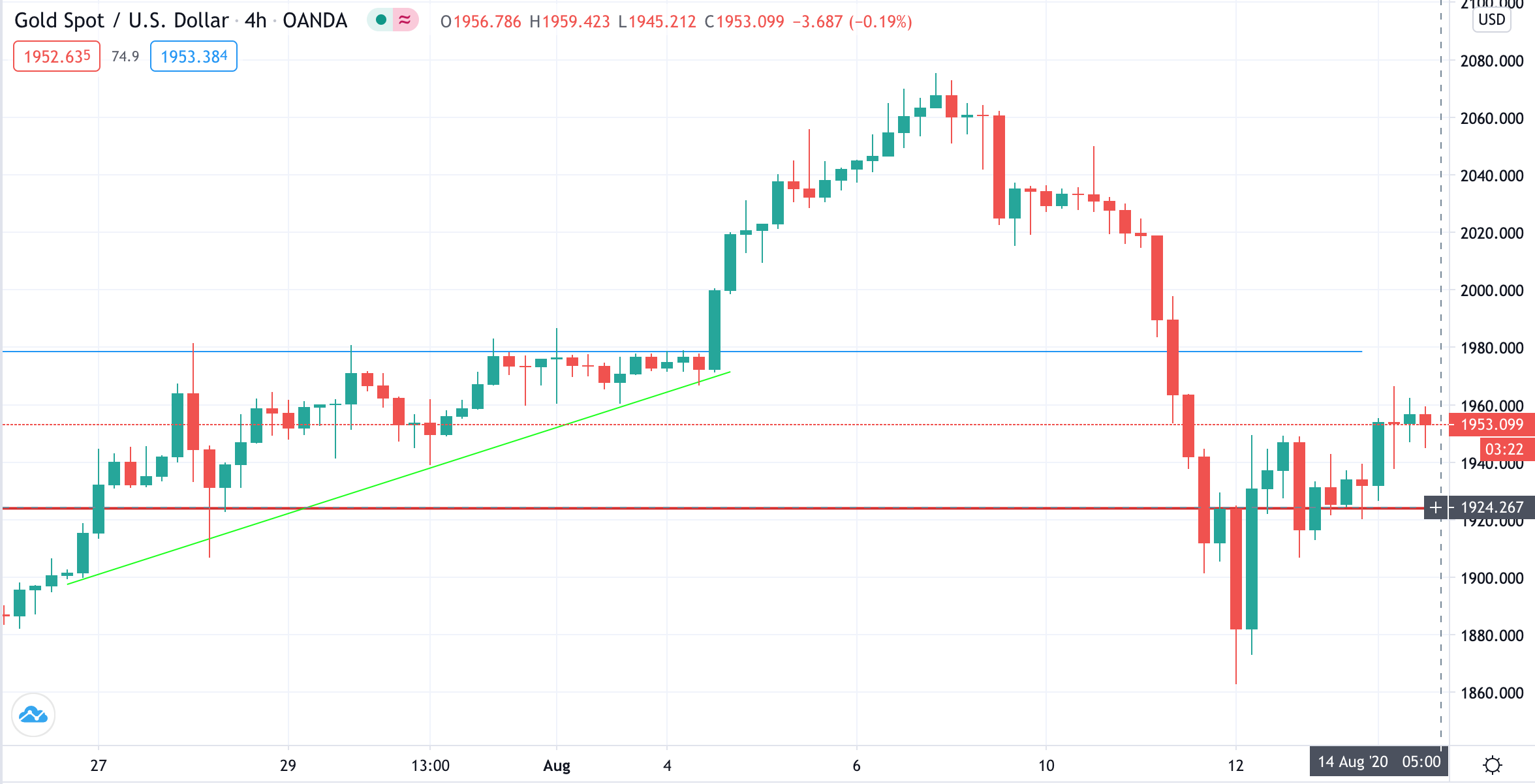 The small recovery rally since the collapse is also becoming quite interesting.

The red horizontal line marks the previous all-time hit set in 2011, it shows XAU having fallen below this on the initial shakeout has not only recovered but has broken past it. Traders had been looking at this point as an indicator as a failed attempt at $1925 would probably have signalled a further shake out.

Having now past that point there is a clear uptrend forming, suggesting the Gold ETF shakeout may have driven the bulk of the sell-off. Therefore, we are watching the previous breakout point of $1980, a break or rejection of this point should give us a trade direction for the coming few days.