For the past 30 months, the linear decline in the AUD/USD was closely correlated with the spread in the Aussie 10-year bond to the US 10-year bond. That correlation has now broken down suggesting the current 11-year low in the AUDUSD is becoming a technical break. 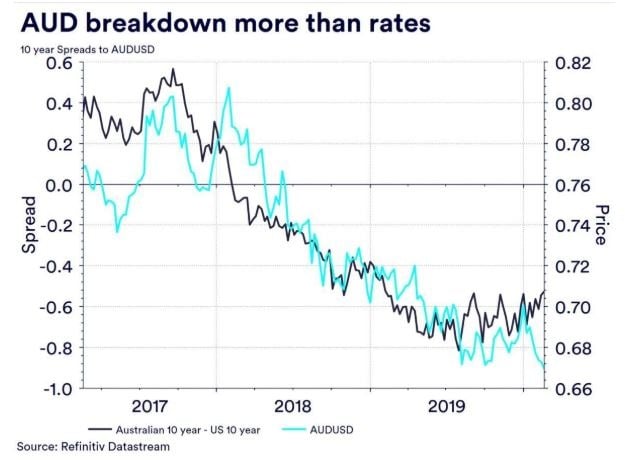 The breakdown is interesting considering the leg lower on the 20th of February was a repricing in the probability of the RBA cutting rates in March after a soft read from the January employment data. The key part of the employment read was underemployment which is back at a 2-year high. Employment was the main justification for cutting rates in 2019, so it should be the reason in 2020. The trend from forward-looking indicators such as job ads and employment subcomponents in PMIs is for employment to remain soft. Therefore cuts are coming – it’s a matter of went.

But, this does not explain everything regarding the pair’s complete breakdown over the last week.

This chart shows the estimates from 28 FX strategists surveyed by Refinitiv come December 2020. The yellow line being the top estimate, the orange the bottom estimate and the purple being the running average. The pair is now tracking with the low estimate and looks like holding to this line in the near future. However, the purple line suggests the pair could actually tick up over the rest of the year which is against the momentum it’s currently exhibiting.

If we look at the AUD/USD in the daily chart, the pair has crossed over the 21-, 50- and 100-day moving averages with ease in the past week. All three are now chasing the pair lower confirming the momentum is to the downside and that buyer exhaustion is now on. Watch out below: 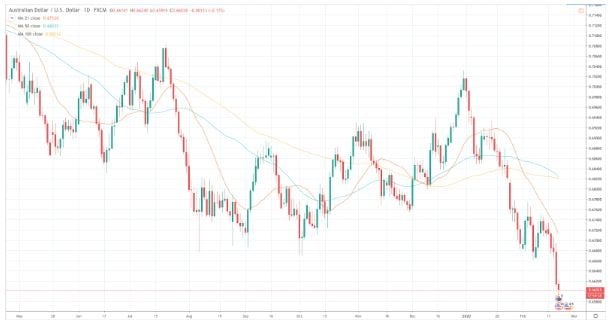