DXY remains under pressure, and this pressure is likely to over the coming months as the economic and health disparities between the US and its peers reduces and the world continues to reopen. The risk-off sentiment that drove defensive trades into the USD is clearly unwinding on improving global risk sentiment.

But there are signs of fatigue in this almost one directional trade and we would not be surprised to see either some consolidation and/or profit-taking in the interim as several pairs test but fail to break newly-formed resistance levels.

EUR/USD
As expected, EUR/USD broke through $1.10 and rose quickly through $1.1170 and up to its highest level since March 11 of $1.136 on the back of the ECB. The pair has moved in waves since the crisis began, but in the main, the uptrend of the wave has been stronger than the downtrend. Fundamentally the pair to the end of 2020 is likely to rise further, but in the very short term expect consolidation back in the $1.12 handle before going again.

GBP/USD
Since the BoE stepped back from its suggestion it was gearing up to start negative rates GBP/USD has added some 5 cents. At $1.26 on the back of the USD weakness, the pair looks evenly poised for a further risk burst but, suspect it too will consolidate first before going further. We remain wary of this pair, there are a plethora of factors at play that make Cable tricky to be involved with.

AUD/USD
AUD/USD over the past few weeks has been on an absolute tear, as fundamentals on the AUD side combine with the global risk trade and USD weakness. I wrote a piece last week illustrating the fundamentals and they are clearly part of the reasoning the pair touched a 6 month high of $0.6989.

However, on the release of Australian first-quarter GDP that momentum has been to slow. By no means has it end the run but it has given traders a moment to pause below the magical $0.70 level.

If we compare the daily chart and the 4-hour chart we can see the uptrend is still intact in the daily but is consolidating in the 4-hour. 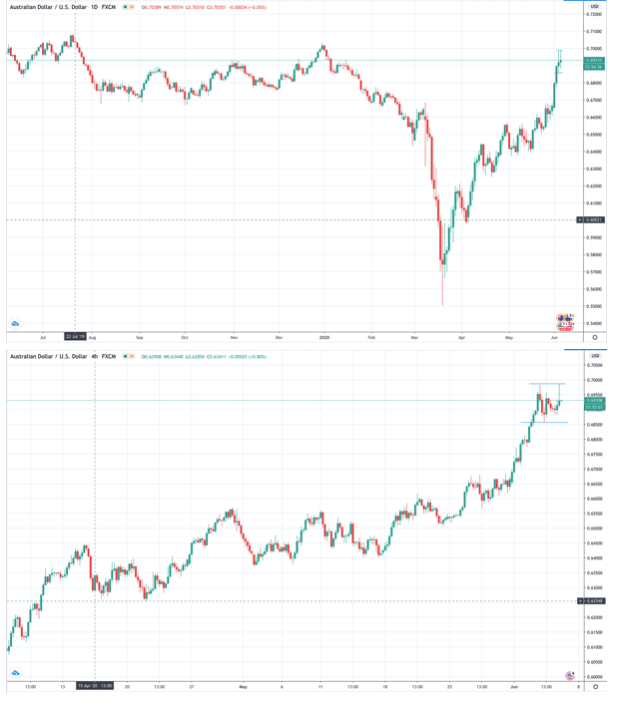 With Australia employment data out this week and global risk data coming through as well signs the COVID crisis is abating further may just be the push the pair needs to continue onwards. However, as it waits for this, don’t be a surprise to see some buyer fatigue that sees the pair at the lower end of $0.69 and even back into $0.68 handle.