[VIDEO] Currency Point: Scratching the bottom of the barrel

The push-pull factors in FX are building by the day. We are still of the view that in the interim the USD will follow a ‘typical’ path in the lead up to the November 3 Presidential election by appreciation.

Post-November 3 will be all about the result, and who wins the White House, the Senate and the House (Congress) will be core to the USD direction. This is something we will discuss in our special “Trading the US election” series over the coming weeks.

However individual pairs and crosses have had specific data and policy updates to deal with in the past week and we can’t go past the AUD/USD as case in point.

The breakdown has been amazing, a 5.7% decline inside 5 days on the USD ramping up but also on the back of the RBA somehow finding ‘additional’ policy levers in its already exhausted arsenal.

Although these policy levers have not been enacted, the probability of it happening according to the market is near 100%.

The reactions in the AUD are just as telling seeing it touch 2-month lows. 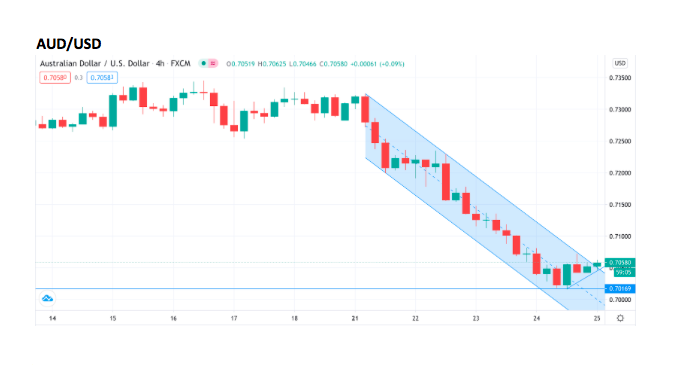 AUD/USD hit $0.7016 (two-month low) before trimming losses. Interestingly enough on the 4-hour it’s broken out of the very steep and strong downtrend of the past 6 trading days. The question is, is this a true breakout or consolidation before a possible further leg lower?

The fundamentals for the pair over the coming 2-4 weeks are bearish, the longer-term fundamentals however are bullish. We would be watching for momentum fatigue or acceleration to confirm direction in the interim.