This is what the market is expecting from the policy framework review: “stronger guidance about the path of interest rates by linking the timing of future rate increases to specific thresholds for unemployment and inflation.”

Using target ‘static’ figures will certainly add to ‘clarity’ but will also provide the market with an ability to ‘run’ on fluctuations and over and under shoots.

Most had expected the review to be pre-announced, but this confirmation has heighted the market’s view that there will be something significant announced as the Fed minutes proved to be something of a volatility event.

The lack of consensus for a change to average-inflation rate and the fact yield caps are off the table (for now) triggered a solid covering rally in the USD, particularly in AUD/USD and USD/JPY.

It is why Jackson Hole could be a core catalyst for the coming months even with the US Presidential elections only 2 months away.

While we are on the Fed, something remarkable happened last week – 38 former Federal Reserve officials signed an open letter urging the Senate not to confirm the nomination of Trump advisor Judy Shelton to the Fed Board of Governors. The separating of monetary and fiscal policy is getting ever smaller.

We must also remember that data, in the main, continues to be ‘positive’ and that despite the fact US weekly jobless claims were at up to 1.106 million; expectations had been for approximately 992,000. Continuing claims however were better falling by 633,000 to 14.844 million.

The August Philly Fed softened which is unsurprising considering the second wave effects in the US but the forward (6month) outlook rose to 38.3 from 36.0 and is now a mile ahead of its low point in May.

USD/JPY: After a short sharp recovering rally the pair is back on trend also highlighted by the short-term weighted averages crossing. 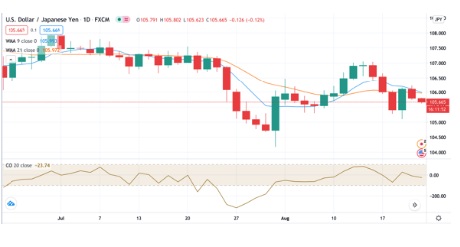 EUR/USD is finding strong resistance at $1.195 levels, tend is still to upside but needs catalysts. One to watch around the Jackson Hole announcement, could fall on Powell’s messaging.

AUD/USD, like its EUR peer can’t break through $0.725. Moving averages are narrowing and the pair is starting to make a sideways channel. It too needs a catalyst to confirm movement. 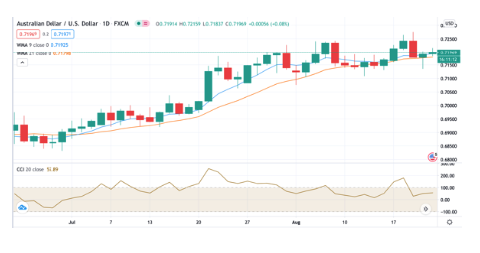 GBP/USD is the one with most momentum and one that is looking through the current impasses its peers are experiencing, Cable want to head higher on a technical basis.