Currency Point: Just keep throwing money at it – the US way

Just keep throwing money at it – it just seems to be the US way these days. The news that the Biden administration is to announce a $6 trillion budget for 2022, would be the largest package since the second world war. Further fuelling the mountain the cash that has flushed US markets in the post COVID-world and taken the USD with it.

It goes hand in hand with what the Fed is trying to do drive down borrowing, drive up confidence and see spending and wealth prosper.

What is interesting from all of this is this chart: 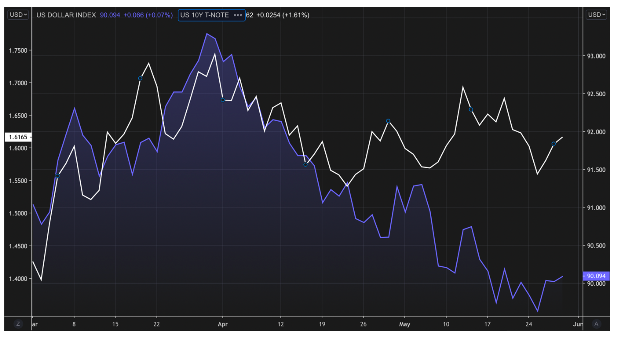 This is the dollar basket correlated to the US 10-year bond yield – something we discussed for most of the first quarter.

However, this link has clearly broken down, yields have stabilised, but DXY has continued to fall. That break down is likely due to 2 things – Biden’s second $1.9 trillion stimulus and the fact the Fed has (so far) won the argument over tapering and when rates will rise.

However, over the past week or so that downward trend in DXY has slowed and we now find ourselves in tight ranges – But, Fed speak continues to be the driver.

This ‘equilibrium’ in pairs maybe facing some interesting pressures as more and more members are changing tune on ‘taper’. Not by much, but we can’t ignore the fact the second biggest player at the FOMC looks to have put a foot in each camp and that is Fed
Vice-Chair Richard Clarida.

The comments that mattered.

“It may well be…in upcoming meetings, we’ll be at the point where we can begin discuss scaling back the pace of asset purchases…I think it’s going to depend on the flow of data that we get.”

His quote on the recent CPI reads was rather interesting: &quot;[it was] very unpleasant surprise but would “prove to be largely transitory”.

Now the reaction in the bond market was actually the complete opposite of what one would expect from these comments doing by falling. Could explain why FX remained quiet.

It could also fall to further Fed members holding the line:
Fed President of Chicago Charles Evans reiterated that the rise in inflation is likely to be “transitory, in fact he when further by suggesting this was a positive “after a decade of shortfalls” and that it “does not herald a persistent rise. Inflation expectations so far only point to moderate increases.”

So this week, watch for signs.