It had been built as the biggest FX catalyst of the month, even more important than last week’s non-farm payrolls yet CPI was more a dead-cat bouncer than a spark to fire up traders. Why? It certainly raise plenty of questions about future expectations and current policy settings.

Here is the chart of US CPI over the past 5 years and its year-on-year change.

We have added a line of best fit (blue) to highlight the large kink in the 2020 data (see the red circle) that has most FOMC members and economists alike calling the current year on year trend transitory rather than structural. 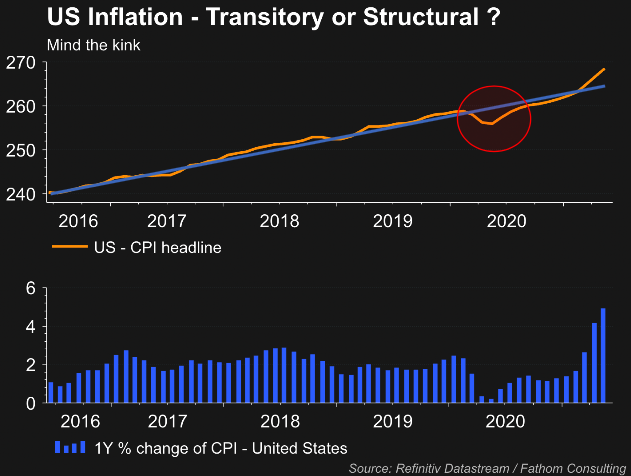 The kink is large and the rolling 12-month nature of a year-on-year comparison does have its floors. However, the chart does show that even factoring in the COVID effect in 2020, inflation is accelerating above trend, see it breaking about the line of best it. So maybe there is some merit to the idea that some of the aspects that make up inflation are indeed structural not just COVID transitory.

Looking at the actuals US CPI rose 0.6% in May when you couple this with April’s 0.8% it’s the strongest 2 months of growth since the 1980s. As the chart shows year on year it surged 5.0% compared to estimates of 4.7% and April’s year on year figure of 4.2%. CPI ex-food  energy rose 0.7% month on month and 3.8% year this is the largest increase in core CPI since June 1992. But all over this is being explained away by the incredible gains in used vehicle prices up a further 7.3% in May to go with the 10% in April – a transitory read for sure.

However again, it’s not that simple services are rising, employment is strong and thus wage pressure is coming. What is also interesting is that the next PCE read is on the 25th (26th for us in Asia) and using today’s CPI you can infer a 0.5% month on month gain and 3.4% year on year gain.

The Fed at their last meeting have PCE at 2.2% come December, that is becoming materially unlikely. So, are they forced to update their forecast and then dismiss it? Or is this going to be something more?

But as we said CPI was really a dead cat bounce, the USD initially jumped on it, before latching onto US bond yields and sliding all the way back to pre-release levels and then some.

EUR/USD is stuck at $1.217 but its mainly been driven by the USD side of the pair so further USD weakness will test a resistance that is building at $1.223.

USD/JPY is also revering back to a trend of 109.5 have lost interest in this pair for now.

Movement is low for what is normally a very attractive pair.

AUD/USD at $0.775 after a bit of a round trip on the CPI read, we remain concerned for the AUD. Having release strong data of late and seeing commodity prices holding firm for it to be still below $0.78 shows two things. The RBA is still holding firm in the market and two that the commodities story is being seen as cyclical.