The Correlation Trader shows the correlation between symbols over a configurable
timeframe, e.g. recent H1 bars.
Correlation is measured on a scale from -100 to +100:

Correlation can have a major effect on your trading risk. For example the following charts show H1 EURUSD and USDCHF over the same time period:

These symbols had very strong negative correlation (about -95). If you were long EURUSD and short USDCHF over this period, or vice versa, then you would have seen very similar profits on both positions. In effect, you did not have two positions: you only really had one position. (If you were long both symbols, or short both symbols, then you probably had a profit on one and a matching loss on the other.)

It is generally advisable to minimise the correlation between your open positions. Otherwise, you are either trading the same price action twice over, or you have two positions which cancel each other out.

The Correlation Trader helps you to identify symbols with strong or weak correlation, and to trade emerging differences in the correlation.

The Correlation Trader shows recent price charts for two symbols side by side (and can be used simply as a way of displaying two linked price charts): 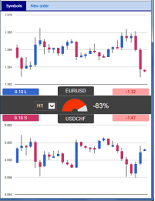 2.2 Correlation
The bar in the middle lets you change the timeframe for the charts. It also shows the following:

2.2.1 Correlation values
The gauge shows the correlation on scale of 0 to ± 100. It makes little difference whether values are positive or negative (e.g. +90 or -90), and the meaning depends on whether you are long or short each symbol. For example:

2.2.2 Correlation colors
The color of the gauge depends on the strength of the correlation:

2.3 Changing the symbol selection
You can change a symbols by clicking on its name. The label is replaced with an editable box where you can type in a new symbol name, with auto-complete.

2.4 Opening and closing positions
[Please note: the order tab is not available on the tradable platform] 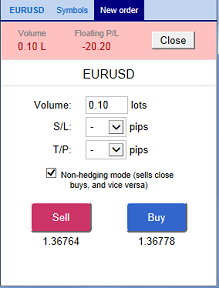