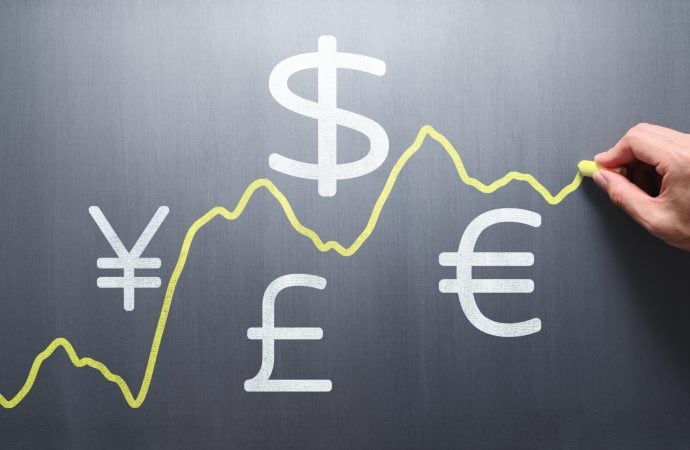 Against a basket of foreign currencies, the US dollar index (ticker: DXY) left behind a colourless vibe last week, ranging between 90.44/89.53 session extremes.

Support at 89.34 continues to command technical relevance on the daily chart, extended from as far back as early 2009. Pattern structure, on the other hand, reveals the unit pierced the upper side of a descending wedge (a pattern displaying a decrease in downside momentum within its walls [91.43/90.42]). With the DXY in decline since topping at the 93.43 31st March peak, the recent upside pattern breach is likely viewed as a reversal signal.

While the pattern break shines the technical spotlight on a possible run back to 91.36 resistance, Friday’s shooting star candlestick pattern—a bearish signal—implies upside pressure is perhaps fragile and a dip into 89.34 support could also be on the cards this week.

With respect to trend, as noted in previous writing, a bearish narrative has clouded the greenback since the early months of 2020, in the shape of well-defined lower lows and lower highs. Many analysts likely refer to this downward movement as a primary trend. Interestingly, the 93.43 31st March peak—and subsequent downside—echoes seller strength within the current downtrend, unlocking the possibility of fresh lower lows beyond 89.34 support over the coming weeks (see black arrows).

The RSI indicator, a popular gauge of momentum, reveals the value remains south of resistance at 45.51. This suggests upside momentum lacks impetus, emphasising we may drop in on oversold space, possibly greeting support at 21.36. Should 45.51 move aside, another layer of indicator resistance is visible at 55.67.

Quasimodo resistance-turned support at 1.2169 has established a resilient floor, welcoming price action on Friday by way of a dragonfly doji candlestick pattern (bullish signal). Note, a mirror version was seen on the US dollar index in the form of a shooting star candlestick pattern (see above).

For those who read Friday’s technical briefing you may recall the research team underlined a pennant pattern (1.2214/1.2175) that established around the 1.22 figure.

As you can see, Friday navigated beneath the pattern’s lower edge and nosedived to within touching distance of Quasimodo support at 1.2132, before pulling back and crossing swords with the 1.22 figure (those short based on the pennant pattern were likely eyeing lower price levels, as the textbook take-profit level is formed by taking the height of the earlier move from 1.2262 and extending this value from the breakout point). Space north of 1.22 has the 100-period simple moving average in range at 1.2212 this week, followed by supply coming in at 1.2240-1.2228.

Interestingly, the RSI value rebounded from trendline resistance-turned support (taken from the high 75.04) at the same time H1 bottomed ahead of the noted Quasimodo support.

The overall trend facing higher, and monthly price exiting demand at 1.1857-1.1352 in April, positions the daily timeframe’s (dragonfly doji candle pattern) test of Quasimodo resistance-turned support at 1.2169 in favourable light this week. Buying from here has resistance to target at 1.2278 (another Quasimodo formation).

In conjunction with the bigger picture, H4 displays scope to approach resistance at 1.2244. With H1 testing the resolve of 1.22 offers Friday, the technical outlook suggests a break of this psychological level early week, leaning towards H1 supply drawn from 1.2240-1.2228, sited just south of H4 resistance mentioned above at 1.2244.

Since the beginning of 2021, buyers and sellers have been battling for position south of trendline resistance (prior support – 0.4776 high) and supply from 0.8303-0.8082. Should a bearish scenario unfold, support at 0.7394 is featured to the downside, with additional downside pressure targeting demand at 0.7029-0.6664 (prior supply).

Despite rupturing resistance at 0.7816 early May, the level maintains its position on the daily chart. Interestingly, since April 20th, AUD/USD has offered a non-committal tone, consolidating between the aforementioned resistance and support from 0.7699 (yellow). Of late, however, the currency pair shook hands with the lower wall of the aforementioned range.

Out of the RSI, the indicator remains flirting with space south of the 50.00 centreline, following a dip from 60.30 peaks in May.

The Australian dollar staged a modest comeback against the US dollar on Friday as the US dollar index trimmed earlier upside from two-week tops. In addition, the risk-on setting weighed on the safe-haven buck and aided the risk-sensitive Aussie dollar.

The technical landscape on the H4 scale saw 0.7696-0.7715 support welcome price action on Friday. Arranged as a support/resistance zone since the end of January, price action traders will likely be watching for this area to hold and ultimately encourage an advance to at least Quasimodo resistance at 0.7782, with a break unmasking daily resistance at 0.7816.

Amidst the opening hours of US trading on Friday, short-term movement whipsawed through 0.77. Sell-stops fuelling moves into bids off neighbouring demand at 0.7671-0.7687 was clearly sufficient enough to elevate the currency pair back above 0.77 and cross paths with resistance at 0.7714—a previous Quasimodo support level.

Overhead resistance to be mindful of this week falls in around the Quasimodo formation at 0.7755, closely shadowed by supply coming in from 0.7783-0.7771 (houses the H4 Quasimodo resistance at 0.7782).

With reference to the H1 chart’s RSI, the value rebounded north of oversold support at 19.30 on Friday and subsequently exited oversold space. The 50.00 centreline could prove to be a roadblock this week (resistance), yet a breach throws light on overbought resistances at 70.61 and 80.85.

The daily timeframe’s consolidation between 0.7816 and 0.7699 remains a key watch this week. Technically, a run off the lower edge of the said range promotes a bullish scenario. Beneath the range, nonetheless, reveals possible downside to daily support at 0.7563.

Although April finished lower by 1.3 percent and snapped the three-month winning streak, May is currently holding the breached descending resistance, up by 0.5 percent and echoing potential support.

USD/JPY—in lockstep with the US dollar index—powered higher for a third successive session on Friday. However, unlike prior sessions, a few pips shy of long-term resistance at 110.94-110.29 (posted under supply at 111.73-111.19), we witnessed price fade earlier gains and shape what’s known as a shooting star candlestick pattern (bearish signal).

The RSI value has moved above resistance at 57.00, shifting attention to the possibility of further upside momentum into overbought terrain and resistance at 83.02.

Off multi-week tops at 110.20, USD/JPY modestly recoiled on Friday and concluded the session within touching distance of support coming in from 109.71.

Traders are urged to note territory beneath the said support shows scope to drop as far south as demand at 109.02-109.20—a decision point to initially push above 109.71 resistance—which aligns closely with trendline support, drawn from the low 107.47.

As evident from the H1 scale on Friday, price action whipsawed above the 110 psychological level—movement likely viewed as a bull trap—and concluded the session around local lows at 109.74. Above 110, however, we can see Quasimodo resistance at 110.40.

It is sub 109.74 sellers may find space to work with, directing towards a Quasimodo resistance-turned support at 109.45 and intersecting trendline support, pencilled in from the low 108.56.

For those who watch the RSI, the value rebounded from the 50.00 centreline in closing trade, helped by trendline support, taken from the low 25.47.

Monthly flow is attempting to forge support off a recently breached descending resistance line, which underscores a potential bullish scenario.

H4 support at 109.71 is a relatively clean level, having seen the base serve as healthy resistance during April and May. As such, in conjunction with the monthly timeframe’s technical structure, buyers making an entrance off 109.71 this week could be seen.

A H1 close back above the 110 figure would help confirm bullish intent off the aforementioned H4 support and likely welcome additional buyers in the form of breakout orders.

Alternatively, should H4 support at 109.71 give way, technical expectations are for a dip to H1 support at 109.45 and intersecting H1 trendline support.

The pendulum swung in favour of buyers following December’s 2.5 percent advance, stirring major trendline resistance (2.1161). February subsequently followed through to the upside (1.7 percent) and refreshed 2021 highs at 1.4241, levels not seen since 2018. May, despite diminished volatility during March and April, trades firmly on the front foot, up by 2.6 percent MTD.

Buyers and sellers have been squaring off (consolidating) a touch south of Quasimodo resistance at 1.4250 since May 18th, following an earlier 1.4003 support retest.

The RSI informs traders that upside momentum is levelling off, movement which may have trendline support, taken from the low 36.14, make an entrance.

Similar to the AUD/USD (see daily timeframe), GBP/USD is clearly a patience game right now, fluctuating within the walls of a reasonably defined range at 1.4105-1.4219. Understandably, having noted the overall trend faces a northerly trajectory, the majority of traders are likely anticipating a break to the upside to cross swords with the daily Quasimodo resistance at 1.4250.

In similar fashion to the H4 scale, we can see short-term H1 traders playing the range between 1.42 and 1.41, with Friday fading the upper edge of this range. In between the area, the 100-period simple moving average is seen circling 1.4158ish.

Outside of the aforesaid consolidation, technical elements reveal double-top resistance around 1.4246 and support priced in at 1.4078.

In regards to the RSI, the value retested the underside of resistance at 56.58 on Friday and wrapped up just ahead of the 50.00 centreline. Below the latter, shaking hands with support at 33.00 is possible, stationed ahead of oversold space.

With scope to advance on the monthly scale (to 1.4376), as well as a defined uptrend visible on the daily timeframe since pandemic lows around March 2020, the daily chart’s Quasimodo resistance at 1.4250 is perhaps vulnerable.

Breakout traders will also likely be closely monitoring the ranges. A breakout, which given the current uptrend, is likely to be north, with an initial target set around the H1 double-top resistance at 1.4246, followed by the daily timeframe’s Quasimodo resistance at 1.4250.