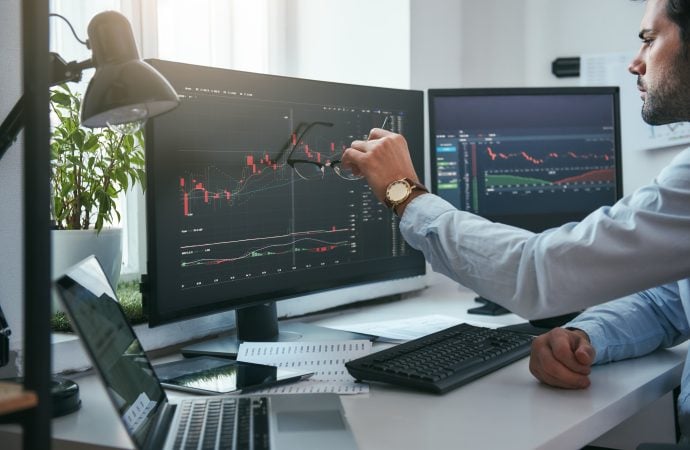 The US dollar—measured by the US Dollar Index—extended recovery gains last week, adding 0.4 per cent and touching a high of 105.79, values not visited since 2002. Consequently, the decision point from 105.61-104.87 came under attack and had its upper boundary probed as a result. You will note the aforementioned area served well in mid-May and delivered a 350+ point decline that came to an end at the 50-day simple moving average at 102.63, currently circling just north of an ‘acceleration’ trendline support, taken from the low 95.17 (both of which assume the role of possible support this week). Upstream, assuming the unit dethrones the current decision point, brings light to Quasimodo resistance from 106.97.

Through the relative strength index (RSI), recent momentum studies reveal negative divergence established just south of indicator resistance from 79.23, a sign of slowing momentum. Should the indicator extend its retracement this week, focus swings to support between 40.00-50.00: a ‘temporary’ oversold region since August 2021 (common viewing in strongly trending environments).

In spite of decreased momentum (RSI), the break of the decision point from 105.61-104.87 signals strength on the side of buyers. This—coupled with the active primary bull trend—buyers may extend Friday’s advance to take aim at Quasimodo resistance from 106.97 in the coming weeks.

Despite ranging between $1.0601 and $1.0359, EUR/USD wrapped up 0.2 per cent lower last week and fashioned what many candlestick enthusiasts would refer to as a ‘long-legged doji’—indecision.

The general trend in this market reflects a primary bear trend, establishing a series of lower lows and lower highs since 2021. Adding to this, seen from the monthly timeframe, the overall vibe has been to the downside since topping in April 2008. The trend, therefore, is likely one of the main factors discouraging any meaningful buying from current weekly support, made up between Quasimodo resistance-turned support at $1.0298, 2nd January low at $1.0340 (2017), and a 100% Fibonacci projection at $1.0445 (AB=CD harmonic bullish formation). Should weekly flow remain beneath Quasimodo support-turned resistance from $1.0778, and eventually dismantle current support (as the trend suggests), a 1.272% Fibonacci projection could be targeted beneath parity at $0.9925.

Assessing shorter-term flow for the week, the H4 chart features prime resistance at $1.0655-1.0632, as well as a potential AB=CD bearish pattern (100% Fibonacci projection) at $1.0685, while lower on the curve, focus remains on Quasimodo support at $1.0354. A closer reading of price action on the H1 shows a breach of prime support at $1.0608-1.0582, informing traders that sellers might soon take the wheel. As you can see, the week ended with price testing $1.05, though what’s technically interesting is H1 resistance sheltering the level at $1.0533 and prime resistance at $1.0586-1.0551. Should sellers indeed pursue lower levels, any movement beyond current prime support shines light on $1.04.

Medium term (weekly and daily timeframes) delivers support to work with this week: weekly support between $1.0298 and $1.0445. Although a recovery attempt could materialise, this may actually be viewed as a sell-on-rally scenario as a result of the trend, particularly if weekly resistance enters the fight at $1.0778.

AUD/USD extended the prior week’s 2.3 per cent decline last week, finishing 1.5 per cent lower. Month to date, the currency pair is down 3.3 per cent, consequently centring focus on weekly support this week between $0.6632 and $0.6764, comprised a 100% Fibonacci projection, a price support, and a 50% retracement. Supporting the possibility of additional bearish pressure is the long-term trend direction. The monthly timeframe has portrayed a downtrend since August 2011, indicating the rally from the pandemic low of $0.5506 (March 2020) to a high of $0.8007 (February 2021) on the weekly timeframe is likely viewed as a deep pullback among long-term chartists. Downside from the 2021 February top (an early primary bear trend), therefore, is potentially seen as a move to explore lower over the coming weeks.

Out of the daily chart, the pair continues to work under the 200-day simple moving average at $0.7240 and, thanks to Friday’s dominant one-sided bearish showing, is threatening to topple familiar Quasimodo support at $0.6901. Clearing the aforesaid level sets the stage for an approach to support at $0.6678, which happens to be nestled within current weekly support. According to the relative strength index (RSI), the indicator has registered minus 50.00 values since early June, informing traders that, on average, losses are exceeding gains: negative momentum. The Question is whether we will see oversold space tested this week? It’s almost a guarantee if price breaches $0.6901.

Taking into account the bearish landscape on the bigger picture, the H1 timeframe poses interesting structure. Following Friday’s rebound from $0.69 during US hours, this invites prime resistances at $0.7029-0.6984 and $0.6991-0.6958 into view. Technically, both have equal chance of rejecting price, though something to keep in mind is the possibility of running stops above $0.70 which would haul price into the higher of the two prime resistances (yellow). Another particularly standout zone, of course, is primary support at $0.6863-0.6892, strategically positioned beneath $0.69.

Having noted the bearish primary trend, and the weekly timeframe pointing to lower levels, daily Quasimodo support from $0.6901 is in a vulnerable position. Prior to longer-term sellers taking command (assuming long-term sellers do indeed make a push), H1 prime resistances between $0.7029-0.6984 and $0.6991-0.6958 may be tested which could function as a platform for short-term sellers to work with this week, targeting at least $0.69.

Month to date, the currency pair is higher by nearly 5.0 per cent. Aside from a momentary pause in May, the recent advance follows March and April’s mammoth gains (5.8 per cent and 6.7 per cent, respectively). However, momentum on the weekly timeframe noticeably slowed in recent trading at 28th January high (2002) from ¥135.16, despite ending the week considerably off worst levels, touching a high of ¥135.59 (levels not visited since 1998), and the overall market echoing a heavy-handed uptrend since 2021 (primary bull market). Also of relevance on the weekly chart is resistance at ¥136.04; support, for those looking lower, remains obvious at ¥125.54 (tucked under the ¥126.36 swing low [24th May]).

Supply-turned demand at ¥131.93-131.10 on the daily chart, as you can see, delivered a platform for dip-buyers to operate with at the tail end of the week. From this zone, price reclaimed a large portion of earlier losses. Weekly resistances also remain key on this timeframe this week between ¥136.04 and ¥135.16.

While the trend is healthy, weekly resistances between ¥136.04 and ¥135.16 are a concern for buyers and should not be overlooked. This—together with H1 dipping a toe back under ¥135—signals sellers could show at least until ¥134 before buyers attempt to take the currency pair higher in line with the longer-term uptrend.

In a market demonstrating a downside bias (primary bear trend) from February 2021 tops ($1.4241), as well as a long-term downtrend since late 2007 tops at $2.1161 (check monthly timeframe), an impressive lower shadow took shape on the weekly timeframe last week from Quasimodo support at $1.1958. This is not a hammer candlestick formation, though, of course, invites bullish undertones given the size of the lower shadow. Overhead on the weekly timeframe casts light on resistance at $1.2719. A little closer to home, however, is daily trendline resistance, taken from the high $1.3639, with a break here pointing to daily Quasimodo support-turned resistance at $1.2762 (placed just above the weekly resistance at $1.2719). Finally on the bigger picture, the daily timeframe’s relative strength index (RSI) is testing resistance around the 50.00 centreline, following positive divergence.

Shorter term, though, $1.22 will be watched closely in early trading on the H1 timeframe. A break of this level, together with H1 trendline support, informs intraday players that a test of $1.21 could be seen. This also implies a test of daily trendline resistance is unlikely to occur. Respecting $1.22, on the other hand, signals a run to at least $1.23.