Having cancelled the next COVID support package for the American people in five 280-character tweets (something that was actually leading to risk on trading), all attention is back on the election.

Which is interesting in itself as other fundamental forces that have been driving FX trade for the past 2 weeks rather than the biggest political event in several years.

On the election; the polls are starting to show signs of a ‘bridge to far’ for the President.

Now; yes, polls are wrong and yes, 2016 the shows that the President is capable of pulling off a win.

However, this chart from RCP (RealClear Politics) is a blend of all polls taken to produce a consensus read and that consensus read must be a concern for the President. 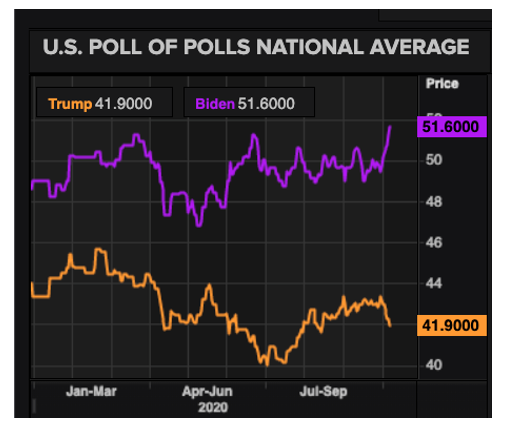 The 9.7 percentage point lead the Biden holds is bigger than the lead Hilary Clinton took into the 2016 election. What is also different to 2016 is that Clinton didn’t have as many consecutive months ahead as Biden does in 2020, nor the same amount of undecided voters which is at a record low.

What is also different in 2020 compared to all elections going back to 1992 is that the market is seeing a change of administration as a ‘positive’ rather than a negative.

DXY in the past 6 elections has appreciated leading into an election when an administration has changed. It has fallen when the administration was re-elected.

However, this time, (so far at least) DXY has deviated from this trend completely. A trend that has only ramped up as the polls have widened this week as we can see here.

The spike ‘up’ on October 6 was due to the President’s tweets – a risk off event. All subsequent movement suggest the market is possibly content with a Biden win. It is something we will be watching very closely with just over 3 weeks to go and as we said would be the first time this trend has been broken in over 28 years.