US Employment Data in Focus – November 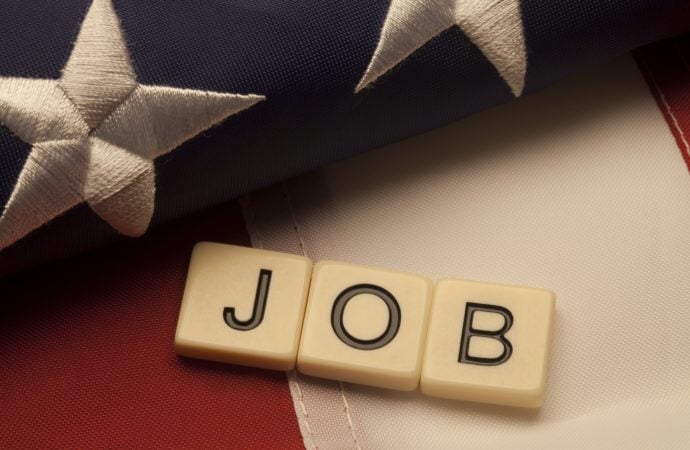 As we head into the close of an undeniably tumultuous 2020, Friday gifts traders with November’s US non-farm payrolls report.

The COVID-19 pandemic continues to influence the world and the financial markets, recently reporting an eye-popping 64 million global cases, according to Johns Hopkins University, a US private research institute located in Baltimore, Maryland. Masks remain mandatory across most of the US, with some states imposing stay-at-home orders, including California.

With additional restrictions expected, the COVID toll is likely to continue to weigh on the US economy and employment. There is some light at the end of the tunnel, however, in the form of progress in discussions over a fresh US COVID-19 relief package, in addition to COVID-19 vaccine hopes that triggered robust gains in US equity benchmarks during November.

According to the Centers for Disease Control (CDC) Director in a recent interview on Fox News, the vaccine is likely to begin being rolled out mid-December initially in a hierarchical way, targeting healthcare providers and high-risk individuals. The Director added hopefully by March the vaccine will be available to the general public. In more recent news, the UK approved Pfizer-BioNTech’s vaccine – the first country in the world to do so.

The employment release is formed by two comprehensive reports: the household survey and establishment survey. The former covers the unemployment rate, while the latter focuses on the headline non-farm payrolls figure.

October’s non-farm employment release added 638,000 payrolls, falling from an upwardly revised 672,000 in September (above market consensus of 595,000). According to the BLS[1], gains were evident in leisure and hospitality, professional and business services, in addition to retail trade and construction. Employment in government, however, declined.

The general consensus for November’s US non-farm payrolls is in the range of 500,000, marking the lowest reading during the pandemic and largely reflecting recent COVID-19 restrictions.

The unemployment rate is a closely followed economic indicator, derived from a monthly survey called the Current Population Survey (CPS), made up of approximately 60,000 households.[2]

October’s unemployment rate witnessed a 1.0 percentage point decline to 6.9 percent, according to the BLS’s Household Survey. The survey also added that unemployed individuals fell by 1.5 million to 11.1 million, a sixth successive decline since April’s 14.7 percent reading.

November’s unemployment reading is anticipated to tick lower by 0.1 percentage points to 6.8 percent.

The consensus for November’s average hourly earnings is 0.1%.

According to the Institute of Supply Management (ISM)[3]:

Interestingly, all but the employment index remained in expansionary territory in November, largely impacted by a resurgence of COVID-19 cases. Figures above the 50 percent mark suggests expansion in manufacturing; under 50 percent indicates a contractionary phase. ISM noted that out of 18 industries, eight reported employment growth.

Overall, although the rate of change has slowed, the manufacturing sector continues to grow, notching a sixth consecutive month in expansionary territory. 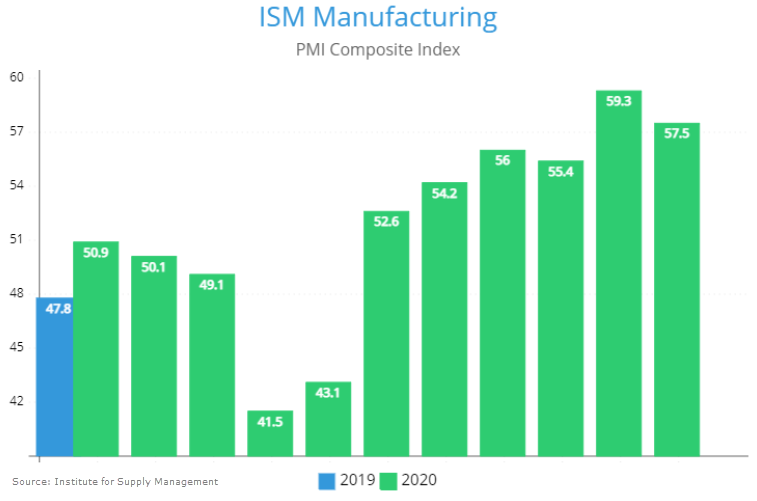 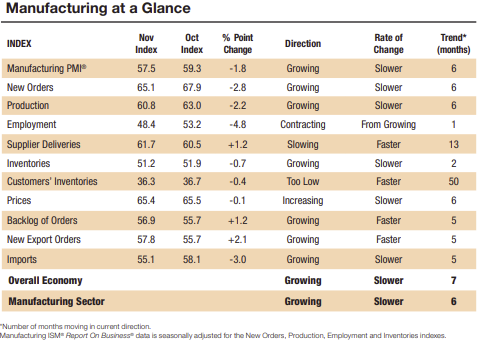 Each month the Conference Board surveys a nationwide sample of 5,000 households, consisting of a questionnaire. The report gauges individual (household) confidence levels concerning the performance of the economy.

November’s consumer confidence registered 96.1, down from October’s upwardly revised 101.40 reading and lower than the 97.7 consensus.

‘Consumer confidence declined in November, after remaining virtually flat in October’, said Lynn Franco, Senior Director of Economic Indicators at The Conference Board. ‘Consumers’ assessment of present-day conditions held steady, though consumers noted a moderation in business conditions, suggesting growth has slowed in Q4. Heading into 2021, consumers do not foresee the economy, nor the labour market, gaining strength. In addition, the resurgence of COVID-19 is further increasing uncertainty and exacerbating concerns about the outlook’.[4]

Private sector employment increased by 307,000 jobs in November, according to the ADP National Employment Report[5], lower than October’s upwardly revised 404,000 reading and lower than the 433,000-consensus value. Leisure and hospitality led the way, adding 95,000 jobs despite soaring COVID-19 cases across the US.

‘We expected a much weaker number, so this is something of a relief’, said Ian Shepherdson, chief economist at Pantheon Macroeconomics. In fact, Shepherdson said the ADP number, which has often underestimated the government’s non-farm payroll count through the pandemic, is consistent with a total around 700,000-750,000 for November.[6]

Manufacturing activity remains in expansionary terrain, though the employment index dipped beneath the 50 percent mark.

With economic indicators pointing to a soft employment market at the moment, the dollar’s technical picture, as represented by the US dollar index, appears to be trading on the same page.

Technically, a declining dollar is not surprising.

From a long-term trend perspective, you will note the market’s primary trend exhibits a bearish disposition on the monthly chart, entrenched within a large pullback since May of 2008. Since 2016, however, resistance formed around the 103.00 level, causing the daily timeframe to form a series of lower lows and highs in 2020 – some may consider this to be the secondary trend, trading in unison with the bigger picture.

The buck, as you can see, also recently established fresh year-to-date troughs, visiting levels not seen since April 2018. Down nearly 1 percent on the week, as of writing, and on track to register a third successive weekly decline, the greenback is flirting with the possibility of breaching daily support at 90.99. Owing to the bearish presence, current support is unlikely to attract fresh buying and could eventually direct daily price towards demand at 89.83/90.29.

Additionally, recent USD weakness tugged the daily timeframe’s RSI value into oversold territory, an area not visited since August of this year. Concerning the 200-day simple moving average, circling 95.87, the dynamic value has continued to curve lower since June.