US Employment Data in Focus – December 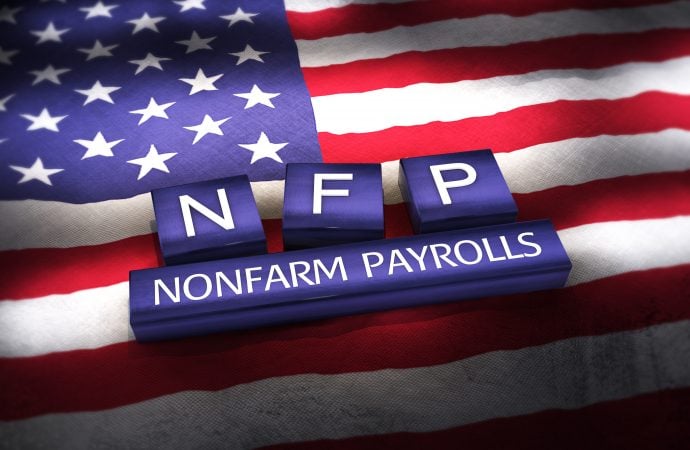 With 2020 in the rear-view mirror, the first full trading week of 2021 is underway and gifts traders with December’s US non-farm payroll’s report Friday.

The COVID-19 pandemic also remains a central theme across the US, and most parts of the world. The US recently recorded 21 million cases and more than 350,000 deaths, according to Johns Hopkins University (JHU)[1]. The Daily Mail also reported 1 in 930 Americans have died from COVID-19, and more than 18,400 died of COVID-19 in the last week[2].

Several countries launched COVID-19 vaccination programs in recent weeks. According to the Centres for Disease Control and Prevention (CDC)[3], nearly five million Americans have received a dose of a COVID-19 vaccine, boosting hopes that it may be the beginning of the end of the pandemic.

The employment release is formed by two comprehensive reports: the household survey and establishment survey. The former covers the unemployment rate, while the latter focuses on headline non-farm payrolls.

The general consensus for December’s US non-farm payrolls is between the 50,000-100,000 range – the lowest reading since the COVID-19 pandemic took hold in early 2020.

The unemployment rate is a closely followed economic indicator, derived from a monthly survey called the Current Population Survey (CPS), made up of approximately 60,000 households[5].

December’s unemployment reading is anticipated to have ticked higher by 0.1 percentage points to 6.8 percent.

The consensus for December’s average hourly earnings is anticipated to have ticked 0.1 percentage points lower to 0.2 percent.

According to the report released by ADP on Wednesday, private payrolls for the month of December contracted for the first time since early 2020[6], down by 123,000 jobs (consensus: 60,000 payrolls). The ADP report also highlighted the service-providing industry contracted by 58,000 jobs, with trade, transportation and utilities trailing not too far behind, registering a 50,000 contraction. The majority of layoffs were seen in large companies employing more than 1,000 workers (-169,000).

Ahu Yildirmaz, vice president and co-head of the ADP Research Institute, noted: ‘as the impact of the pandemic on the labour market intensifies, December posted the first decline since April 2020. The job losses were primarily concentrated in retail and leisure and hospitality’.

With economic indicators pointing to a soft employment release, the US dollar’s technical picture, as measured by the US dollar index, or more commonly referred to as the DXY, remains increasingly bearish.

Kicking off from the top, monthly price structure dethroned a long-term trendline support (72.83) in December. On top of room to reach for support priced at 88.65, this provides a relatively bearish standpoint. Further downstream, notable support resides around 83.22, joined by a number of Fib levels (Fib cluster).

Depending on the structural view one takes with regards to swing points, the broader outlook shows we topped around the 103.00 level (between 2017 and 2020), following a deep pullback from 2008. Continuation lower, according to the trend, therefore, is potentially on the table over the coming months.

From the daily timeframe, support, taken from March/April 2018, at 89.34 recently made an entrance, with Thursday, as of writing, forming a robust bullish candle.

Technical observations on the daily chart also show price recently punctured the upper side of a declining wedge pattern between 94.30/92.18. This is likely to be interpreted as a bullish signal, with 92.76 targeted (green boxes). Though in light of the sluggish performance following the breakout higher, resistance at 91.00 and 92.26 may hamper upside.

Additional points of note here are the trend on this timeframe, launching a series of lower lows and highs since topping in early March 2020. Also notable is price crossing the 200-day simple moving average heading into June 2020.

With reference to the RSI, the indicator also formed a declining wedge pattern throughout November and December. The pattern’s upside target rests around 52.00 (conveniently aligning with RSI trendline resistance). So, with the indicator currently registering 39.00, increased bullish momentum could be on the cards here.

The H4 timeframe currently has price action engaging a Fib resistance cluster around the 90.00 level. Additional resistance can be seen on the RSI indicator at 58.69, in place since late October 2020. Another base of price resistance is found at 90.46/90.33.

With the monthly timeframe suggesting room to dig deeper ground and the daily timeframe, albeit coming off support at 89.34, displaying sluggish upside interest since the break of the declining wedge pattern, 90.00 is particularly interesting on the H4, benefiting also from strong Fib confluence. Should buyers push higher ahead of the NFP release, technical eyeballs are likely to be on H4 resistance at 90.46/90.33.

Therefore, with the above taken on board, NFP consensus and the technical view (based on the presented chart studies) are largely in alignment for a USD decline following the employment release.