Enhance Your Understanding of the MACD Indicator 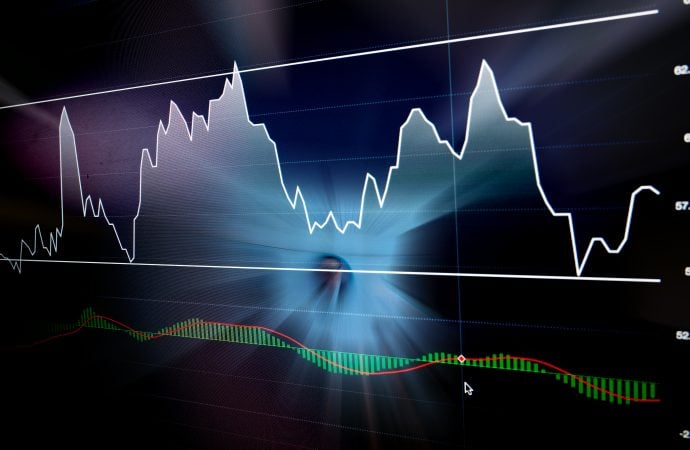 Although the author of several well-known trading books, Gerald Appel is perhaps most recognised as the developer behind the Moving Average Convergence Divergence indicator (MACD), introduced to the world in the 1970s. Interestingly, Appel also founded Signalert Corp. in 1973, a widely read newsletter to this day called Systems & Forecasts.

Over the years, the MACD has become a household name among the technical analysis community, known for its simplistic, yet effective, approach.

Regrettably, traders seldom use the MACD to its full potential. This is where the following article may help.

The MACD, often pronounced as either Mac Dee, or M-A-C-D, is designed to produce trend-following signals based on moving-average crossovers. On top of this, the MACD serves as a momentum indicator (or oscillator), helping decipher when a trending market is gaining/losing momentum.

The MACD value (MACD line) is then further smoothed in the shape of an additional EMA, referred to as a signal line. Most charting packages also provide a histogram. Furthermore, unlike other momentum oscillators such as the relative strength index (RSI) or stochastics oscillator, the MACD is unbounded.

Default settings on MetaTrader 4 (MT4), applied by selecting Insert > Indicators > Oscillators > MACD, are often confusing for newer traders. The MACD’s histogram is displayed as the outline of the signal line (see figure 1.A). Therefore, the traditional histogram’s calculation is not visible.

Figure 1.B, however, represents more of a traditional design, working with the MACD value, the signal line and histogram, which can be installed for free via the MQL5 community.

Indicator colour schemes will, of course, be dependent on the charting software. Though the majority of the time traders are free to adjust colours to suit personal preferences. 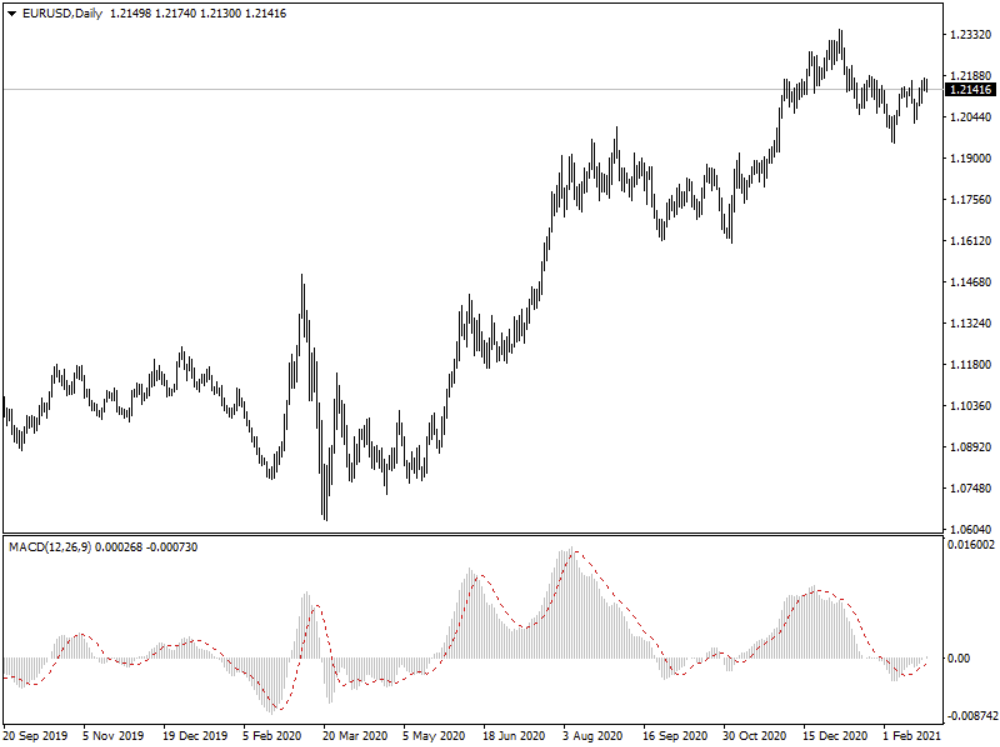 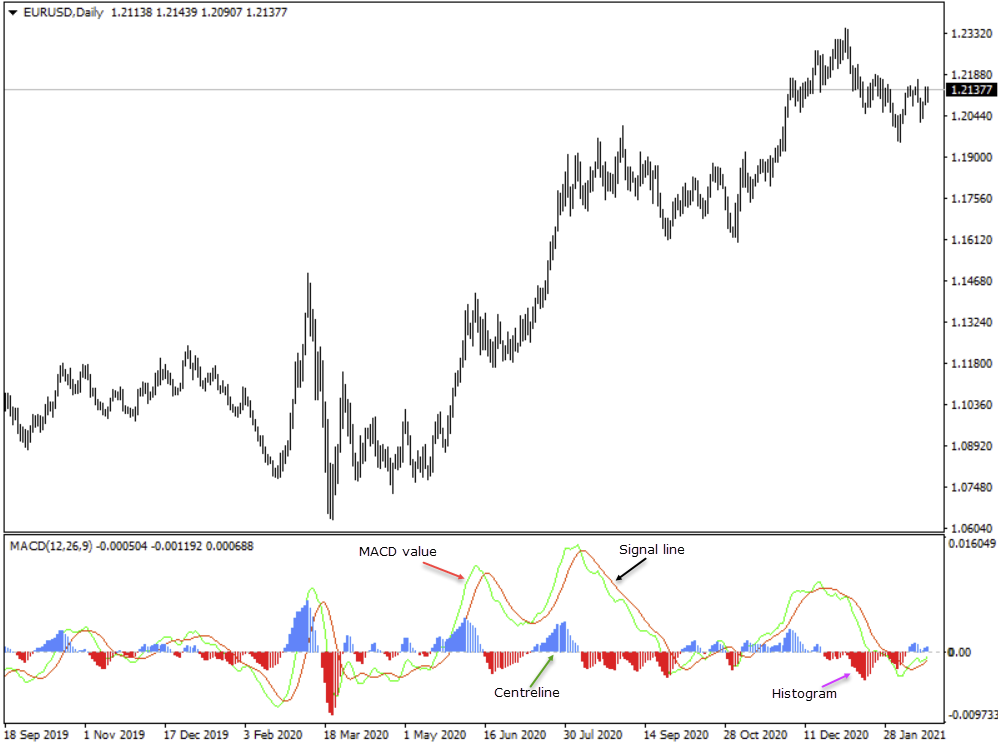 The two default EMAs making up the MACD value are 12 and 26 periods (periods refer to the timeframe—the MACD operates as both a short-term and long-term indicator). The signal line is a 9-period EMA of the MACD value, and the histogram calculates the difference between the MACD and signal line. Note, closing prices are often used in the calculation.

The above settings are considered default periods, presumably established by the developer. Yet, traders are free to modify settings to suit their trading strategy.

The zero-centreline (or zero line) crossover is a common approach, consisting of bullish and bearish centreline crosses.

These movements are recognised as indications the trend is likely to accelerate in the direction of the crossover.

Due to the MACD indicator working with an unbounded surface, many traders believe it is unable to produce overbought and oversold signals, like the RSI.

While boundaries are undetermined on the MACD, some traders opt to apply limits based on historical values. Figure 2.A shows overbought and oversold areas derived from historical movement, which, as you can see, often serves well as upper and lower borders.

Some traders look for bullish/bearish signal line crossovers to form around these overbought and oversold areas to add confluence.

A divergence occurs when the MACD value diverges from price movement. Bullish divergence takes shape when price establishes a lower low and the MACD value prints a higher low. It is important to acknowledge that for price action, the focus is on closing prices, not candle extremes. Figure 2.B demonstrates bullish divergence. The lower low in price confirms the downtrend, yet the MACD’s higher low reveals decreased momentum to the downside.

Figure 2.B also shows bearish divergence, movement which has the currency pair record a higher high and the MACD value form a lower high.

Divergence does a good job of forecasting trend reversals or sizeable retracement/pullbacks; as such, divergence is considered a leading indicator.

However, divergences are by no means a guarantee price action will react. Divergence simply shows the trend’s momentum is slowing, but will, in the case of uptrends for example, continue to outpace downside momentum if the MACD value remains above the zero centreline.

As highlighted at the beginning of the article, the histogram represents the difference between the MACD value and the signal line. Therefore, the histogram is sometimes used to form divergence signals to help forecast potential bullish and bearish signal line crossovers.

In addition to using the histogram’s peaks and troughs, traders also use individual bars as the histogram moves towards the centreline to form divergence signals.

The MACD is considered a top-tier indicator.

The Majority of traders, however, do not trade solely on the back of the indicator’s signals, as the MACD is often used as a confirmation tool.

An example is price testing support—a level which has withstood a number of downside attempts—confirmed by a MACD bullish divergence signal.

Irrespective of how you employ the MACD, you must ensure the trading system is fully tested under different market conditions. This is where a demo account is useful, a simulated practice account using live price data.

Feel free to test-drive FP Markets อบัญชีทดลอง on MT4 or MT5, an established broker that’s been regulated since 2005.