September 30th 2020: Greenback Extends Downside Ahead of US Presidential Debate 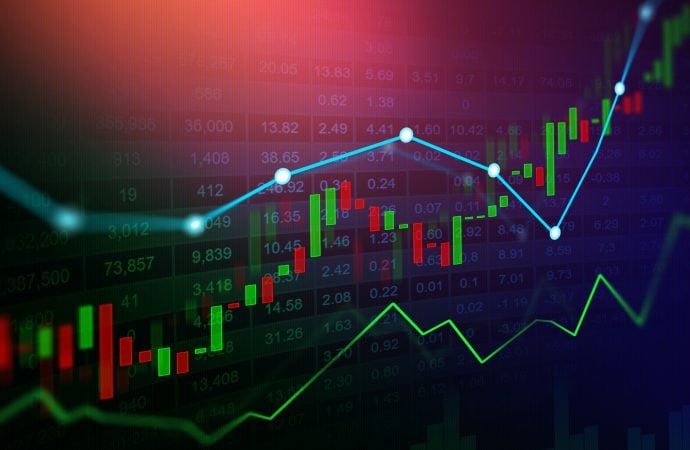 Trading in September, however, is down more than 1.6 percent, on track to snap a four-month winning streak and retest broken trendline resistance.

Leaving behind support at 1.1553, EUR/USD established a bottom Monday, with strong follow-through buying emerging on Tuesday.

The RSI oscillator, after rotating just north of oversold levels at the beginning of the week, is currently hovering just beneath the 50.00 region.

Heading into afternoon trading in London on Tuesday, a break of 1.17 unfolded, swiftly followed up with a retest that propelled candle action north of resistance at 1.1719. After a retest of the level, buyers concluded Tuesday consolidating gains just ahead of 1.1750 resistance. Above 1.1750, supply is visible at 1.1798/1.1776, sheltered under the 1.18 level.

In terms of the 100-period simple moving average, Monday, as you can see, closed above the dynamic value. With respect to the RSI indicator, the line entered overbought status and has recently established a trendline support.

Despite testing above monthly supply at 1.1857/1.1352, September’s depreciation echoes the possibility of further declines to retest the recently penetrated monthly trendline. 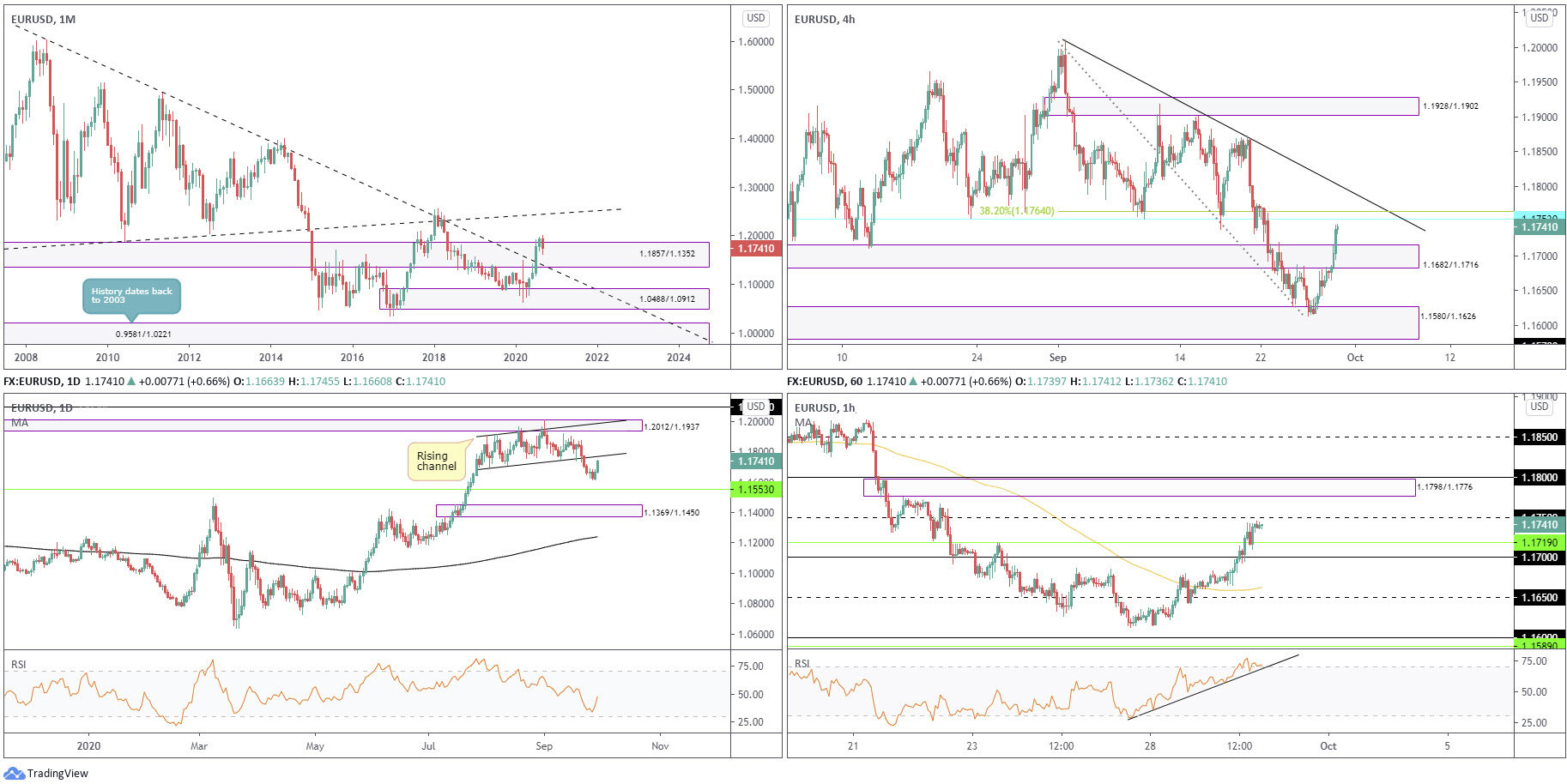 The month of September (lower by 3.3 percent), however, is on the brink of snapping a five-month winning streak with price currently retesting 0.7029/0.6664.

The trend, according to the daily timeframe (and also the 200-day simple moving average), has emphasised a positive tone since bottoming in late March. Traders may also recognise the RSI recently rebounded from oversold turf and on course to retest 53.00 resistance.

After trading above the 100-period simple moving average late Monday, Tuesday gathered traction and toppled 0.71 going into European trading, which led to supply at 0.7148/0.7135 making a show.

In terms of where we stand concerning the RSI indicator, the value exited overbought territory on Tuesday, yet struggled to discover deeper water, hindered by support at 61.10.

On account of the above, short-term action could have sellers make a show, though it may be short-lived having seen monthly price trading from demand.

Notably, September tested the lower boundary of the aforesaid pattern and is on course to end the month off worst levels.

Recent recovery gains off monthly support at 104.62 (the lower boundary of the monthly descending triangle) invites the prospect of additional bullish sentiment towards trendline resistance (111.71) and nearby supply at 107.58/106.85.

The RSI, for those who follow momentum oscillators, recently bottomed ahead of oversold levels and is currently hovering around the 50.00 mark.

With reference to the RSI indicator, the value has emphasised resistance around the 60.00 region.

Monthly support at 104.62 (lower base of the monthly descending triangle) prompting a reasonably decisive advance last week, along with the daily chart exhibiting room to approach trendline resistance and supply coming in from 107.58/106.85, signals buyers are likely to remain behind the wheel.

Violating the aforesaid demand shines light on another demand placed at 1.2192/1.2361, an area that contained downside in late June, whereas moves higher target resistance at 1.3201.

Demand at 1.2646/1.2685 accepted price action last week. While upside attempts were initially met with strong opposition from resistance at 1.2773 (the upper edge of daily demand), buyers mustered enough strength Monday and blew through resistance to greet supply at 1.2965/1.2911. Since then, price has entered into a narrow consolidation between 1.2828 and the under ledge of the aforesaid H4 supply.

Traders will also note the 100-period simple moving average is in the process of turning higher, and could be tested in the event of a breakout to the downside. Pushing through range resistance, nonetheless, has supply at 1.2966/1.2948, a rally-base-drop formation, in sight.

Also of note is the RSI oscillator testing trendline support. 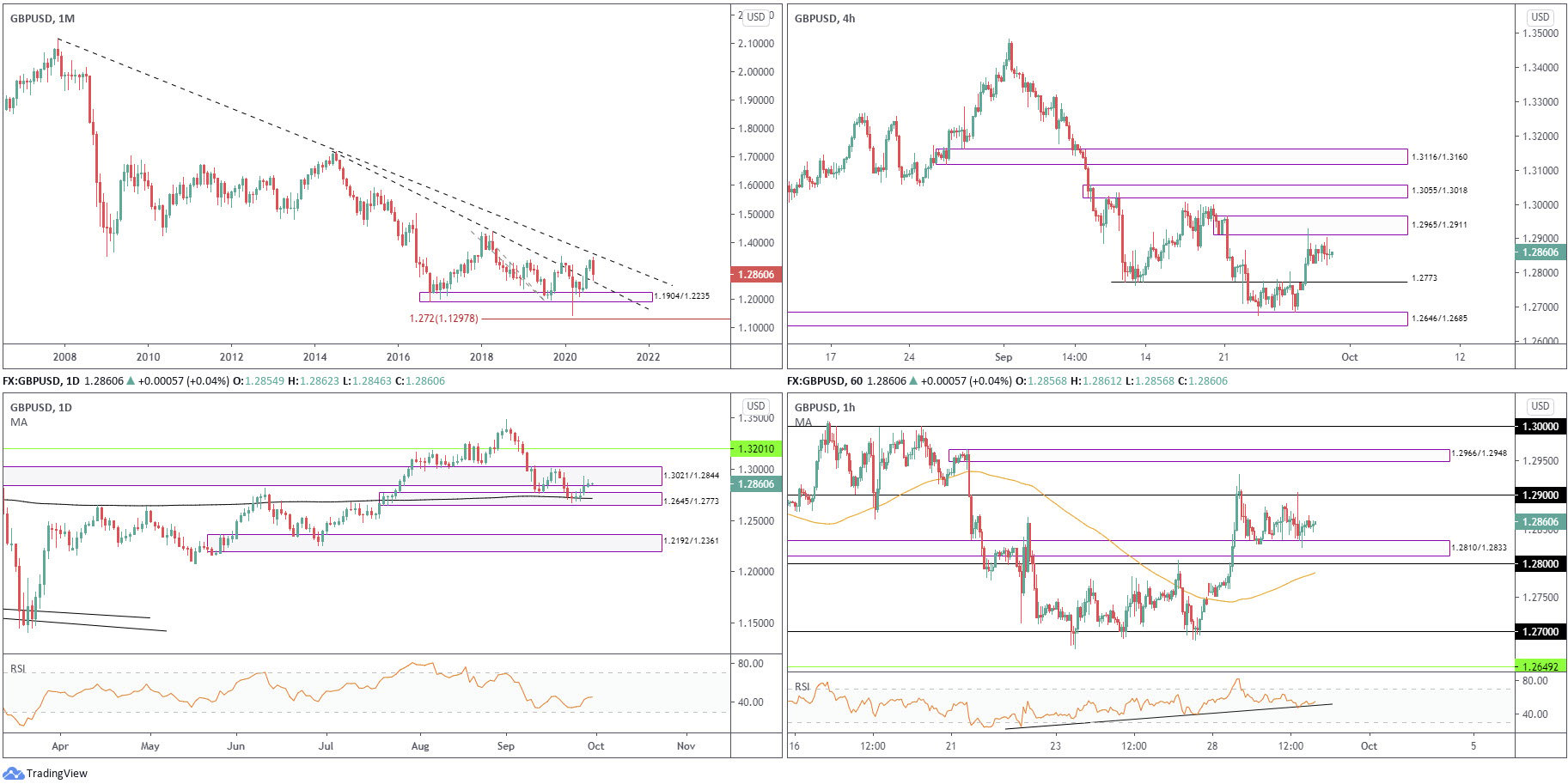