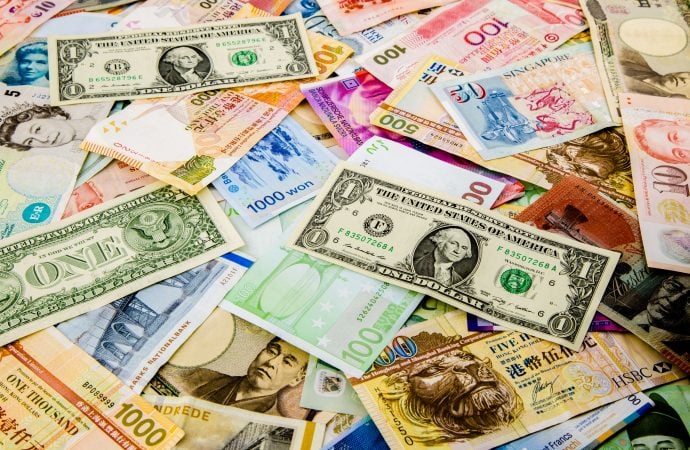 Trading in September is down more than 1.4 percent.

As you can see, the euro traded 0.6 percent lower to the dollar on Monday, dropping to test channel support from 1.1695. Fracturing the aforesaid limit signals a continuation to the downside to support at 1.1553, with a break uncovering clear demand at 1.1369/1.1450.

With respect to the RSI oscillator, we remain inside a (near) two-month descending channel formation.

The US dollar booked impressive gains Monday as sentiment soured, weighing on EUR/USD. Reconnecting with support at 1.1753 and an aligning trendline support (prior resistance – 1.1965), this was enough confluence to attract buyers in recent hours.

Early trade US had candle action assault lows at 1.1731, a few pips plotted ahead of support from 1.1722, and mildly pare losses into the close.

Supply around 1.1787 (red arrow) is seen as the next possible hurdle on the H1 timeframe, located just below the 1.18 level, therefore gains above 1.1750 could be extended today.

In terms of the RSI indicator, the line exited oversold territory, advancing from a low of 22.60.

Despite Monday’s steep decline, technical indicators suggest an upturn in the euro could be on the cards. Monthly price is hovering around the upper edge of broken supply, daily action recently greeted channel support and H4 price also challenged support at 1.1753 and trendline support. In addition, H1 exhibits room to approach 1.18.

With the above in mind, a retest at 1.1750 is a scenario buyers may welcome, initially targeting the 1.18 hurdle. 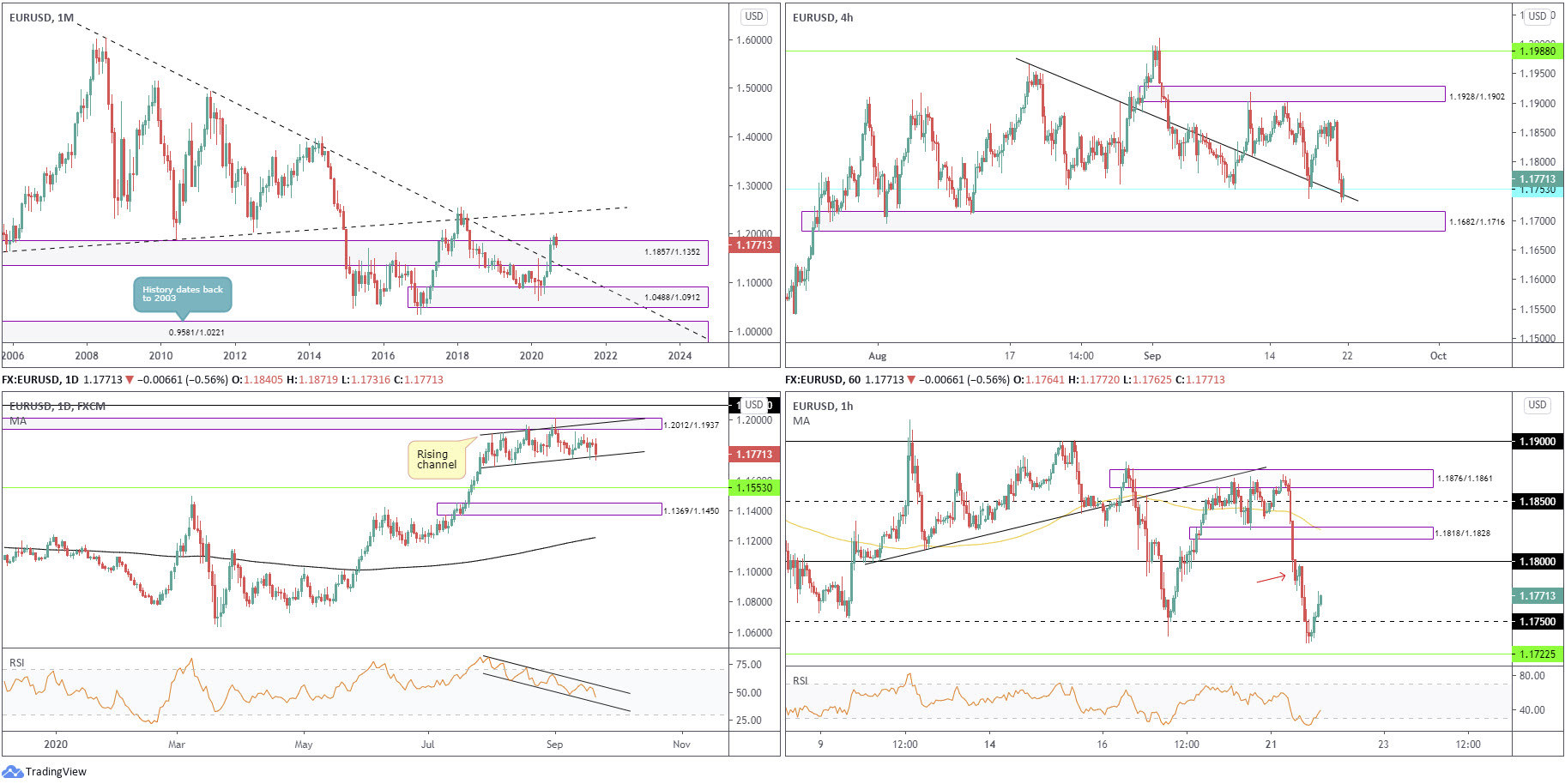 Indicator-based traders may also recognise the RSI dropped through support at 53.00, a clear S/R level since October 2019.

Extending the mild recovery out of 0.7186/0.7207 has the recently penetrated trendline support to target; breaking to lower levels, however, could send price as far south as demand at 0.7119/0.7134.

With reference to the RSI, we recently exited oversold terrain after tapping lows at 20.40.

Given 0.72 (a recorded support level in Monday’s analysis) resides within H4 demand and eight pips above daily demand at 0.7131/0.7192, buyers could remain in control today and take on current H1 supply and H4 trendline resistance, areas where current longs may move stops to breakeven and bank partial profits.

Another scenario to keep an eyeball on is possible dips beneath 0.72 to test the upper edge of daily demand at 0.7192. Alone, this may be enough to spark another wave of buying.

Since kicking off 2017, USD/JPY has been carving out a descending triangle pattern between 118.66/104.62. As you can see, though, price is currently testing the lower boundary of the aforesaid pattern.

Snapping a five-day losing streak, buyers stamped through a mild recovery Monday around monthly support at 104.62 (the lower boundary of the monthly descending triangle).

The RSI is seen bottoming ahead of oversold levels.

USD/JPY staged an impressive recovery during US trading on Monday, lifted on the back of broad USD strength and technical buying derived from a 161.8% Fib ext. level at 104.12, positioned ahead of another 161.8% Fib ext. point at 103.90.

By midday London Monday, the 104 level made a show and encouraged buyers to take over. Upside gained speed heading into the US morning session, clearing 104.50 resistance and testing resistance coming in from 104.82 and intersecting 100-period SMA. North of here, traders will note the 105 level as viable resistance, positioned close by supply at 105.23/105.14.

The RSI oscillator is seen topping ahead of overbought territory, after a strong run higher from oversold space.

The monthly support level at 104.62, derived from the lower boundary of a descending triangle pattern, is likely to be of interest to buyers in this market.

Previous writing stated that buyers pushing for at least 105 on the H1 would not be a surprise. It was also underlined that traders would likely expect sellers to make an entrance around 105, owing to the lower edge of daily supply circling 105.10 and H4 supply at 105.06.

Going forward, and seeing as how we’ve yet to test 105, a 104.50 retest on the H1 could be in the offing today, a move fresh buyers may welcome.

The RSI indicator is currently drawing up a bottoming phase ahead of oversold levels.

The recent depreciation, a victim of USD strength, created firm supply around 1.2965/1.2911 and positioned price action within a stone’s throw from support at 1.2742 and merging ABCD support.

Following an early retest at trendline resistance (prior support – 1.2773), we ducked under the 100-period simple moving average and challenged 1.29 and 1.28. the latter, as you can see, managed to keep price action afloat into the close.

As we enter Asia Pac hours, H1 hovers just above 1.28 and the RSI is poised to potentially connect with 50.00 after exiting oversold space.