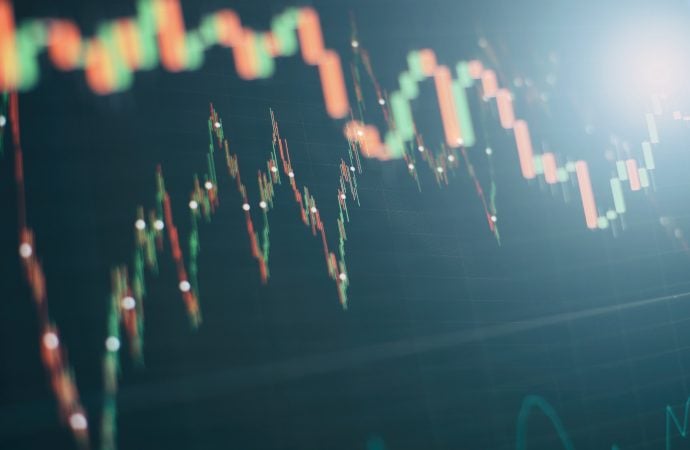 Technical studies reveal movement hovering north of prime support at $1.1473-1.1583 on the weekly timeframe. Gleaning additional technical confluence through a 100% Fib projection at $1.1613 and 1.27% Fib extension at $1.1550, this base remains a key watch, long term. With respect to trend on the weekly chart, the market has largely been bullish since the early 2020.

Charted a pip ahead of the daily Quasimodo, the $1.1690-1.1705 decision point put in an appearance on Monday, encouraging H4 sellers to dial back and hand the baton to buyers. Quasimodo support-turned resistance at $1.1742 is now in range on this timeframe, with subsequent bullish interest to perhaps take aim at Quasimodo resistance from $1.1771.

Intraday action on Monday was interesting. The US dollar, in addition to other safe-haven currencies such as the Japanese yen and Swiss franc, gained traction Monday, elevated amidst clear-cut risk-off sentiment. Europe’s single currency, however, reclaimed a large slice of lost ground, aided (technically) not only by the H4 decision point mentioned above at $1.1690-1.1705, but also $1.17 on the H1. At the time of writing, H1 resistance at $1.1728 is active; rupturing the latter paves the way to $1.1742 on the H4, a level shadowed by H1 prime resistance coming in at $1.1767-1.1776, joined by supply at $1.1762-1.1774.

Latest out of the weekly timeframe has AUD/USD touching gloves with prime support at $0.6968-0.7242. Since printing a two-week recovery in late August, the currency pair has been fighting to entice fresh bullish interest. Failure to command position from $0.6968-0.7242 opens up support at $0.6673. Buyers regaining consciousness, nevertheless, has prime resistance at $0.7849-0.7599 to target. Trend studies on the weekly scale show we’ve been higher since early 2020. Consequently, the response from $0.6968-0.7242 could STILL be the beginnings of a dip-buying attempt to merge with the current trend.

The daily timeframe’s technical landscape informs traders bids are perhaps thin within weekly prime support, at least until price shakes hands with Fibonacci support at $0.7057-0.7126. Those who follow the relative strength index (RSI) will note the value journeyed through the 50.00 centreline last week and had Monday dip a toe below 40.00. This highlights a bearish atmosphere until making contact with oversold territory.

The uninspiring vibe out of weekly demand is demonstrated by way of a consolidation on the daily timeframe between prime support at ¥108.96-109.34 and resistance from ¥110.86-110.27. Range support, as you can see, is currently in the frame. In the event price deviates from range extremes, Quasimodo resistance at ¥111.11 is seen, along with a concealed Quasimodo support at ¥108.43. Based on the relative strength index (RSI), the value is confined to a consolidation surrounding the 50.00 centreline, between 40.87 and 56.85.

Broad declines observed in major US equity indexes elevated demand for the safe-haven JPY Monday. USD/JPY downside swings technical curiosity to the H4 double-top pattern’s (¥110.44) profit target around ¥108.71—sharing chart space with a 1.618% Fibonacci projection at ¥108.86 and a 1.272% Fibonacci projection at ¥108.72. However, in order to reach the aforesaid pattern target, the lower edge of the daily range support highlighted above at ¥108.96-109.34 must be taken.

In keeping with the H4 timeframe, booking additional losses is possibly on the cards until the double-top pattern’s (¥110.44) profit target around ¥108.71. Still, to reach the aforementioned profit target, sellers must marginally defeat the daily timeframe’s range support at ¥108.96-109.34 and take on any bullish interest from weekly demand at ¥108.40-109.41.

Should we nudge through H1 Quasimodo support at ¥109.31, this could be an early sign of bearish muscle making an entrance, and with this, additional selling might take shape.

In the shape of a hammer candlestick formation (bullish signal), supply-turned demand at $1.3629-1.3456 on the weekly timeframe stepped forward in July. The aforementioned zone remains active, welcoming an additional test mid-August. Yet, pattern traders will also note August’s move closed south of a double-top pattern’s neckline at $1.3669, broadcasting a bearish vibe. Conservative pattern sellers, however, are likely to pursue a candle close beneath $1.3629-1.3456 before pulling the trigger.

Sterling kicked off the week on the ropes, clocking one-month lows versus the US dollar. GBP/USD remains comfortable beneath the 200-day simple moving average at $1.3831 and is within reach of Quasimodo support at $1.3609. Previous analysis underlined the daily chart has communicated a rangebound environment since late June between a 61.8% Fib retracement at $1.3991 and the noted Quasimodo support. Momentum, according to the relative strength index (RSI) value, extended position below the 50.00 centreline and scraped through 40.00 on Monday. This informs traders that momentum to the downside is increasing in the form of average losses exceeding average gains.

Yesterday’s bearish presence established a decision point at $1.3750-1.3721, an area forming a decision to tunnel through Quasimodo support from $1.3693 (currently serving as resistance). Daily Quasimodo support mentioned above at $1.3609 calls for attention as a downside objective also on the H4 scale.

From the H1 timeframe, mid-way through London on Monday clipped the lower side of $1.37 and also brought in resistance at $1.3689—a previous Quasimodo support level drawn from 26th August. Further softening places Quasimodo support at $1.3618 and the $1.36 figure in sight.