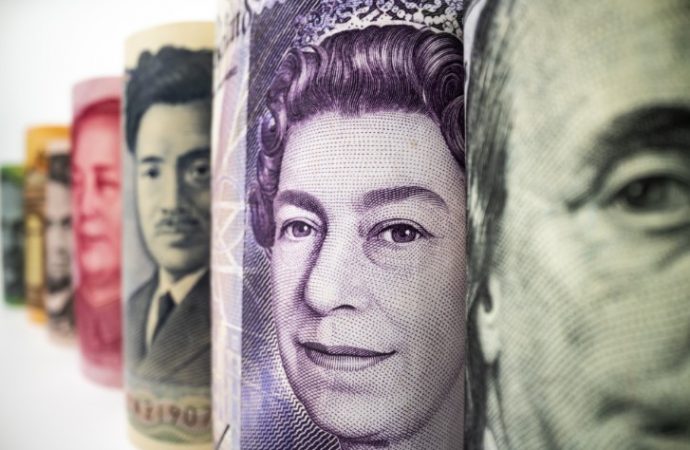 Efforts to extend higher remain contained within the parapets of a rising channel pattern (1.1695/1.1909), in addition to supply at 1.2012/1.1937 making an entrance on August 18, extended from May 2018. Recent trade witnessed a recovery form from the aforesaid channel support, aided by trendline support (1.0774).

Based on the daily timeframe, trend traders will note that alongside monthly price violating long-term structure, EUR/USD has trended higher since late March. With respect to the RSI indicator, we crossed back above 50.00 last week, rebounding from a month-long channel support with the value now poised to retest channel resistance.

Demand stationed at 1.1794/1.1833 upheld position on Monday, delivering modest upside to peaks at 1.1887. The demand represents a reasonably significant zone, a rally-base-rally area where a decision was made to break the 1.1865 September 4 peak.

Supply at 1.1928/1.1902 could welcome the pair again this week, an area that withstood a decisive upside attempt Thursday.

Trendline support (prior resistance – 1.1965) and support at 1.1753 are next to come under fire should sellers push for control; above current supply, resistance at 1.1988 will likely be monitored.

Asian trading and the majority of the European session Monday observed mild upside, drilling into a relatively long-standing supply zone at 1.1894/1.1865. Heading into the US session, a collection of clear selling wicks appeared within the aforesaid supply, generating a modest pullback and threatening a possible 1.1850 retest (joins with channel support [1.1810]).

In terms of where we stand on the RSI indicator, a clear support/resistance zone remains around 45.00.

The above indicates a 1.1850 retest on the H1 could be in store, a level that may contain enough fuel to prompt bullish strategies.

Removing supply throws light on supply at 0.7339/0.7357, a prior demand zone; dipping to lower levels calls for a reconnection with the aforesaid trendline and demand.

H4 is finding it difficult to topple supply from 0.7300/0.7282, yet having seen the lack of selling pressure emerge from here recently indicates buyers may take over. H1 is seen fading the 0.73 resistance. Overrunning the latter, a potential move given the higher timeframes, sparks possible buying to H1 supply at 0.7346/0.7333 (fastened to the underside of H4 supply at 0.7339/0.7357). 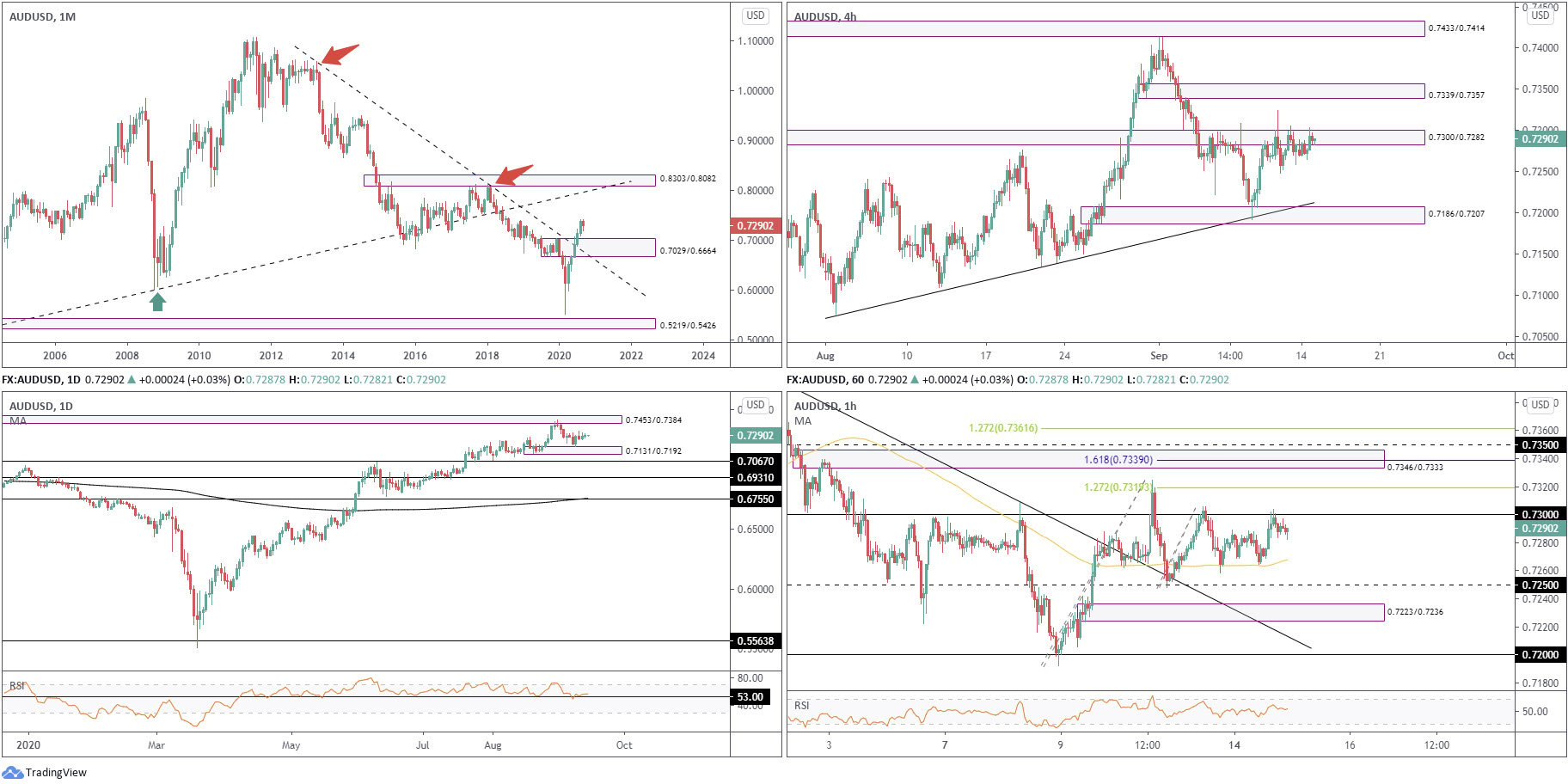 Supply from 107.58/106.85 proved a tough nut to crack in August, an area demonstrating a close connection with trendline resistance from 111.71. The aforesaid areas, alongside a narrow support area at 105.10/105.29, has carved out an active range.

With reference to the RSI, we still remain pretty neutral right now, though we did marginally nudge under 50.00 in recent trading.

USD/JPY traded on the backfoot Monday, potentially weighed by the DXY also pursuing deeper water. The session concluded clipping the lower base of demand at 105.57/105.76, projecting sellers may reach for demand at 105.06/105.30 (prior supply).

The RSI support/resistance zone at around 43.00 was retested as resistance yesterday, with the value currently attempting to exit oversold terrain, as we write. 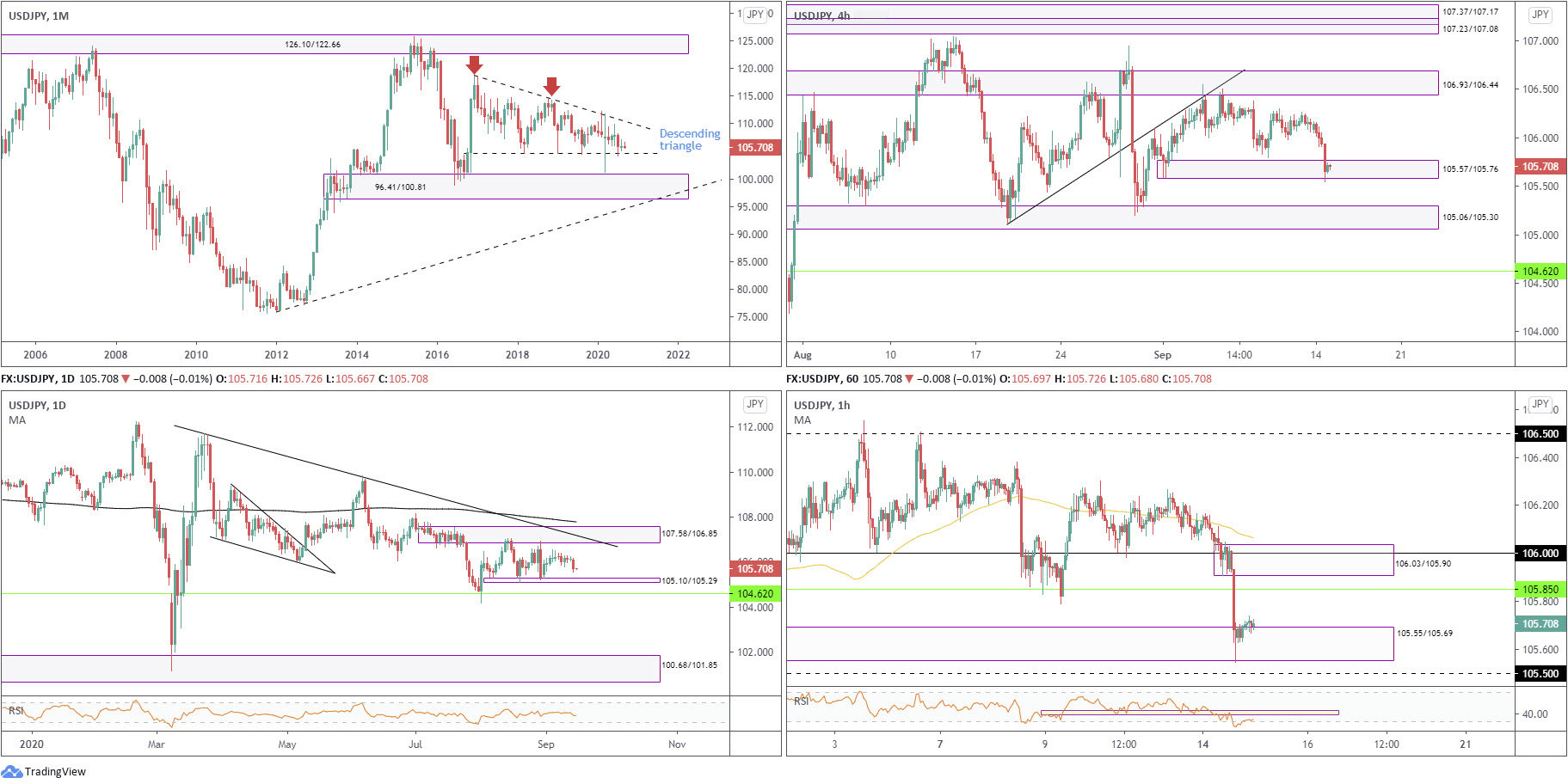 The RSI indicator recently cemented position under 50.00, and is now bottoming ahead of oversold territory.

US trading welcomed the 1.29 level on Monday, a psychological base sharing space with the 100-period simple moving average. Possibly aided by H4 supply at 1.2837/1.2883, this led to a modest depreciation into the close, involving a mild dip beneath 1.2850 support.

RSI action rests around the 50.00 point as of current price, following a rotation from overbought peaks at 73.00.