Known for revealing Japanese candlestick analysis to the Western world, Steve Nison is acknowledged as a leading authority on the subject.

However, in his widely read book, Japanese Candlestick Charting Techniques: A Contemporary Guide to the Ancient Investment Techniques of the Far East, Nison highlights Munehisa Homma (sometimes translated as Sokyu) as being one of the first and most famous people in Japan to employ candlestick analysis.

Although more than 30 recognised candlestick patterns exist, each boasting symbolic names, the research team at FP Markets have joined forces to select three of the most widely used candlestick configurations among technical analysts. The great thing about candlestick patterns are not only can they help provide additional support for most trading strategies, they also do a superb job of serving different trading styles, including scalpers, day traders (day trading – intraday trading), swing traders and position (long term) traders.

A chart is a graphical illustration of historical price action.

Among other chart types, price data is commonly used to form bars and candlesticks over various time periods (timeframes).

Individual candlesticks communicate distinct characteristics: a real body and easy-to-read design through colour. This helps quickly distinguish between a bullish candle and a bearish candle. A bar chart’s body, on the other hand, simply contains a vertical line, often absent of colour.

Dependent on the colours selected, a rising (bullish) candle tends to be white and a declining (bearish) candle is usually black. However, green and red candles are also popular arrangements.

Figure 1.A depicts a bar and candlestick chart.

(Figure 1.A: chart provided by MetaTrader)

Important characteristics to be mindful of in candlestick analysis are the body, open, close, high and low points (figure 1.B). 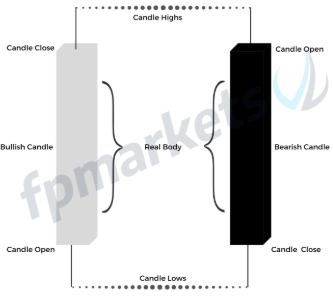 Standing alone, or incorporated in a two or three candlestick configuration (think harami cross patterns ou doji stars in morning star and evening star candlestick chart patterns), the doji represents a period whereby the open and closing price are equal (although many technicians are flexible here).

A doji ultimately demonstrates indecision, a point the market is in equilibrium between supply and demand. This can be viewed as a possible continuation pattern (the market simply taking a breather) or a potential point of exhaustion in trending environments (uptrend or downtrend). Many opt to confirm the doji with additional technical tools, such as support and resistance. If a doji forms at a resistance level, for example, sellers could take control. At support, therefore, a doji formation implies a bullish reversal could be in store.

The doji is a colourful pattern, appointed different titles depending on where the open and closing prices fall e the position on the chart (see figure 1.C). 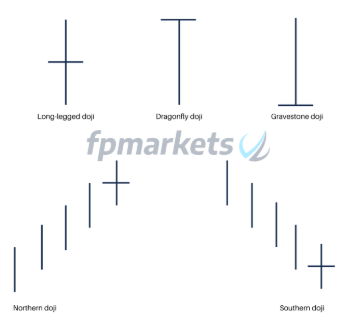 Traditional dojis form through an equal opening and closing price, found in the centre of the candle’s range (present in figure 1.C as northern and southern dojis). A key point to take on board is the formation of a doji within a narrow consolidation, or on a chart with numerous doji candles, may not be meaningful. Like most things in technical analysis, the overall context must be acknowledged.

A variation of the traditional doji is a long-legged doji formation, presented in the form of long upper and lower shadows.

Another popular doji variation is the dragonfly doji, a candlestick pattern established by an open/close positioned at, or near, the high of the candle. Its long lower shadow depicts a point where sellers initially had the upper hand but ran out of steam and handed the baton over to buyers. This pattern is similar to a hammer candle formation, though without a real body. Dragonfly doji patterns can be particularly effective bullish signals in oversold markets. The bearish counterpart to this configuration is a gravestone doji, moulded through an open/close formed at the lower end of the candle. Bearing a resemblance to a gravestone (and the shooting star candle pattern), the ominous label is in place to help warn traders of an uptrend running out of steam (possibly overbought).

Key points to bear in mind:

As shown in figure 2.A, the hammer candlestick pattern has a real body located at the upper end of its formation, usually void of an upper shadow, while a shooting star pattern forms a real body at the lower end of its range.

The general rule of thumb for valid patterns are the upper and lower shadows should be at least twice the length of the real body. The colour of the body is irrelevant.

Similar to the dragonfly and gravestone doji candles, the hammer candlestick pattern offers cues in an oversold market, or in dip-buying scenarios, while the shooting star displays potential overbought signals at peaks/pullbacks.

Traders tend to execute long positions upon price forming a breakout above the upper border of the hammer pattern. Conversely, short positions are generally employed after price violates the lower edge of shooting star patterns. Additional entry techniques involve setting pending orders at the mid-point of the candle’s range in order to attempt to catch a mild correction/pullback before price moves in favour. 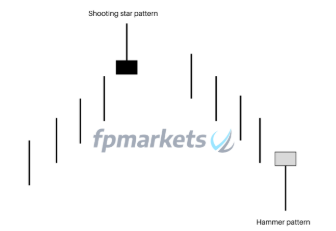 In figure 2.B, readers will note if a hammer pattern forms within a rising market, it is termed a hanging man, a potential bearish reversal candlestick pattern. The formation informs traders that although buyers drove price movement higher into the close, the initial sell-off (selling pressure) implies interest to the downside is perhaps increasing. 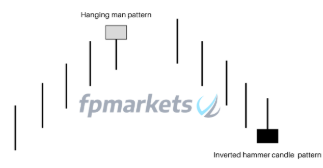 Unlike the doji and hammer patterns, bullish and bearish engulfing patterns represent a two-candle formation in which the second real body engulfs the first real body (see figure 2.C). The first candle could be the previous day’s action or the previous hour’s action – this is dependent on the time period selected. 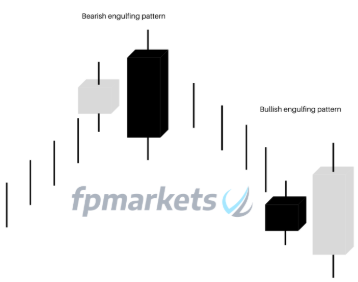 Many understand the engulfing pattern represents a reversal signal, though overlook the environment in which it forms. To be recognised as a valid pattern, a preceding trend must be visible. For example, in a rising market a bearish engulfing pattern is composed of a small white real body (sometimes viewed as a spinning top) followed by a larger dark real body that engulfs the previous candle’s body. Bullish engulfing patterns, on the other hand, form following a downtrend and consists of a small dark real body and a larger white real body, with the latter engulfing the previous candle’s body.

A key point to understand with bullish and bearish engulfing patterns is only the prior real body must be engulfed. The shadows are irrelevant. True engulfing candles are more common in equity markets as the FX spot market tends to open and close at the same price level, aside from weekend gaps or large news events. Therefore, many traders resort to labelling outside reversal patterns as engulfing formations in moedas.

AVISO LEGAL: The information contained in this material is intended for general advice only. It does not take into account your investment objectives, past performance, financial situation or particular needs. FP Markets has made every effort to ensure the accuracy of the information as at the date of publication. FP Markets does not give any warranty or representation as to the material. Examples included in this material are for illustrative purposes only. To the extent permitted by law, FP Markets and its employees shall not be liable for any loss or damage arising in any way (including by way of negligence) from or in connection with any information provided in or omitted from this material. Features of the FP Markets products including applicable fees and charges are outlined in the Product Disclosure Statements available from FP Markets website, www.fpmarkets.com and should be considered before deciding to deal in those products. Derivatives can be risky; losses can exceed your initial payment. FP Markets recommends that you seek independent advice. First Prudential Markets Pty Ltd trading as FP Markets ABN 16 112 600 281, Australian Financial Services License Number 286354.